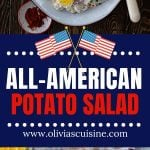 A summer celebration is not the same without a classic American Potato Salad! Creamy, tangy and easily customizable so you can make it your own.

Last year, I learned how passionate Americans are about their potato salad.

There was a skit on Saturday Night Live, making fun of people who put raisins in their potato salad. Guess whose recipe for potato salad with raisins ranks first on Google? And guess who got a loooot of hate mail for messing with the sacredness of potato salad?

And while I still love my Brazilian Style Potato Salad (which calls for not only raisins but also apples!), I stand here – American Potato Salad in hands – to show you that there is space in the world for all the potato salads out there! Brazilian, American, German…even Japanese!

I confess I’m a bit apprehensive to press publish on this recipe. After feeling like Marie Antoinette, with the masses asking for my head over my raisin studded potato salad, it takes a lot of courage to go that route again.

But it’s Fourth of July! And here am I with my take on potato salad. No raisins this time, I promise! Oh God, I hope I survive this.

Let’s talk ingredients. When I asked Americans what had to be in the perfect potato salad, I got a different answer every time!

All said potato and mayo, obviously. Some said pickles, others relish. Sugar was mentioned a couple of times. And there was some controversy regarding paprika and eggs!

Well, since there are as many potato salads as there are people in America, here’s the list of the ingredients for the potato salad *I* enjoy eating:

The best potatoes for potato salad

This is another subject of a lot of controversy! I have read countless articles saying you should avoid using starchy potatoes as they tend to fall apart during cooking.

I don’t know about you, but I am not a fan of crunchy potatoes in my potato salad. Give me tender, melt in your mouth, fluffy potatoes and I’m in heaven!

And while waxy potatoes yield a slightly firmer texture in the final dish, the starchy variety – like Russet potatoes – are much better at absorbing flavors.

That being said, it is important not to overcook them, or you’ll end up with a mushy salad!

The secret to make the best potato salad

I think we can all agree that bland potato salad is a perfectly valid reason to leave a party! If they can’t get that right, imagine the rest of the food?

I find that the secret for a salad that has flavor in every bite is to season the potatoes immediately after cooking, while they are still hot. Then wait for them to cool to room temperature so you can combine with the creamy dressing.

Stirring hot potatoes into a mayo-based dressing will cause the mayo to melt and separate!

Tips and tricks for the best potato salad

Can I make potato salad ahead of time?

Absolutely! Potato salad is a great BBQ or picnic dish because it can be made ahead. Actually, scratch that! It SHOULD be made ahead, because a little vacation (1-2 days) in the refrigerator will make it even better!

Can I freeze potato salad?

Unfortunately, no. Mayonnaise doesn’t freeze well, same with celery, sour cream and eggs. The mayo tends to break once frozen, and when thawed, the texture and flavor will be off.

And while potatoes can be frozen, their texture is somewhat soggy when defrosted. Not to mention the gray color!

American Potato Salad can be made up to 3 days ahead.

Other recipes for an All-American cookout: