posted by Olivia Mesquita on November 19, 2020 2 comments »
Jump to Recipe
This post may contain affiliate links. Read our disclosure policy. 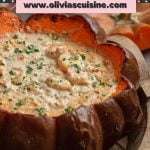 Camarão na Moranga – or Brazilian Shrimp Stuffed Pumpkin – is a traditional Brazilian dish from the coast of São Paulo. Creamy and shrimp-y, this stunning dish is begging to be a beautiful centerpiece at your next gathering!

Brazilian classics are my specialty! This recipe is a combination of my mom’s and my grandma’s recipe, making it the best one ever. If you want more savory Brazilian dishes, make sure to also grab the recipes for my Moqueca Baiana, Feijoada and Vaca Atolada.

It’s finally here! One of the most requested recipes ever here on the blog (and on Instagram).

And the wait was worth it, because it is EPIC! Impressive, delicious and oh so comforting. Right on time for the holidays!

In Brazil, this dish is served year round, but here in the US you’ll only be able to find pumpkins in the fall through winter. That is, unless you have access to an Asian market, as there you can probably find Kabocha (my second choice of pumpkin for this recipe) year-round.

I think it’s also worth mentioning that this recipe can also be made in individual pumpkins. That’s how my grandma used to serve them, as one of the courses for Christmas dinner!

I hope you guys enjoy this Camarão na Moranga and that you make it this holiday season. It truly is an impressive dish and always gets lots of oohs and aahs whenever I serve it!

Camarão na Moranga is a popular Brazilian dish, consisting of a creamy shrimp stew that is served inside a large pumpkin.

It is believed to have originated in the 40s, on the coast of São Paulo, in a city called Bertioga.

Legend has it that morangas (Cinderella pumpkins) were planted and harvested at Presídio da Ilha Anchieta, a penitentiary that held political prisoners. Apparently, some members of Shindo Romei, a faction of Japanese nationalists who murdered other Japanese living in Brazil (because they were considered traitors), started planting fruits and vegetables in the prison.

Because of precarious hygiene conditions at the penitentiary, they ended up getting worms. After denying western medicine offered by the prison doctors, they decided to start planting pumpkins, claiming that the seeds were an effective deworming agent.

It wasn’t long before the city’s population heard about this alternative treatment and started buying these pumpkins – via a trader called João Glorioso – to roast the seeds as a treatment for their illnesses.

One day, João was transporting the prison goods and ended up letting one of the pumpkins fall in the sea, which quickly sank.

A few days (or weeks) later, the pumpkin emerged about 3 miles from where it was dropped, and was found by Dona Zenaide, the owner of a restaurant by the beach.

Intrigued, Dona Zelaide picked the pumpkin and found out that it was full of shrimp (some versions claim the pumpkin had a hole instead of the stem and others say the shrimp pierced the pumpkin and entered through a small hole). Being the great cook that she was, she had the inspiration to create what is now a very traditional caiçara dish: the camarão na moranga.

Now, I know this is a very bizarre urban legend, but it is a fun story nevertheless!

Let’s take a look at what we’ll need to make this dish!

PUMPKIN – This dish is traditionally made in a moranga, which is called Cinderella pumpkin here in the US. However, I have made it in a Kabocha and it was equally delicious!

AROMATICS – This recipe uses 2 onions and 4 cloves of garlic! We need all the flavor we can get, since we won’t use any spices other than black pepper.

TOMATOES – I like to use chopped fresh Roma tomatoes, but you can use a can of crushed tomatoes if you prefer.

THICKENING AGENT – I use all-purpose flour, but if you need to omit gluten, you can use cornstarch instead.

DAIRY – We will use milk AND cream for super creamy results! However, if you need to make this dish less caloric, you can omit the cream. I have not tried making this dish with non-dairy milk, but I’ve seen other recipes using coconut milk!

CHEESE – This dish traditionally uses catupiry or requeijão, but I use cream cheese here in the United States. I also like to finish with a layer of grated parmesan cheese before placing it in the oven, for a delicious gratin effect!

HERBS – I use parsley, but some people like using cilantro (or a combination of both).

How to buy shrimp

You will find several types and sizes of shrimp at the grocery store. Head on or off, the shell on or off, the vein removed or intact, tail-on or tailless, that can be quite intimidating!

Unless you live by the ocean and have access to a great fish market that sells fresh-off-the-boat seafood, go straight to the frozen section to get your shrimp.

Despite popular opinion, in most cases, frozen shrimp is actually fresher than “fresh” shrimp. When fisherman get shrimp, they immediately throw them into ice, freezing them within a very short time of being out of the water.

The display of “fresh” shrimp that you see at the fish counter? Those are most likely the same frozen shrimp that have been allowed to thaw in the store. And there’s no way to tell how many days they’ve been sitting there, getting less fresh by the minute.

Which kind of shrimp should I use for Camarão na Moranga?

This recipe works with either white or pink raw shrimp. I prefer to buy them already peeled and deveined, but you can do that yourself if you prefer! (My husband Tim preferred the taste of the ones I peeled/remove the tails myself, but that was quite time consuming.)

As for size, stick to medium or large. You want every ladleful of the stew to have a lot of shrimp, versus just one or two big ones.

Make sure you are not buying pre-cooked shrimp, as those are almost always overcooked, meaning they will be rubbery and quite bland.

Finally, if you – like me – are worried about sustainability, I highly recommend buying wild caught shrimp. Not only they taste cleaner and more shrimp-y, but they are the most sustainable here in the United States.

If buying farm raised, make sure to research to find out if they are raised sustainably and responsibly! You can usually find that information on the package.

How to thaw frozen shrimp?

You will want to thaw your frozen shrimp before using it in this recipe!

Then, wipe them dry with a paper towel and use as soon as possible as they will keep losing their freshness as they sit.

Here’s how I make Camarão na Moranga. As always, you will find the printable (and more complete) version of the recipe at the end of this post.

Step 1: Prepare and roast the pumpkin.

Step 3: Fill the pumpkin and bake!

While this dish is already a meal in itself, it is often served with white rice and batata palha (fried grated potatoes).

While not necessary, I like to garnish it with more chopped parsley. And, if you want to go the extra mile, you could buy and cook large prawns to decorate the sides of the pumpkin.

In Brazil, camarão de sete barbas (Atlantic seabob) is what’s commonly used. But since they are hard to find here in the US, you could use tiger prawns instead!

When serving, make sure to dig deep with your serving spoon so you can serve some of the pumpkin flesh as well as the shrimp stew!

Reheating shrimp is always a risk. You might end up with overcooked, rubbery shrimp that will ruin the whole dish!
However, you could roast the pumpkin a day ahead and refrigerate until ready to use. You will need more time in the oven to heat it up properly though.

How long will leftovers keep in the fridge?

Leftovers, if stored in an airtight container, will keep for up to 3 days.
You will want to scoop out as much as you can from the bottom and sides of the pumpkin, that way you can store the pumpkin flesh with the shrimp stew in a container and discard the large pumpkin shell.

How do I reheat it?

Reheat leftovers in a saucepan, over medium-low heat, adding more cream as needed to bring it back to the original consistency. Try not to overcook the shrimp too much, as it will get tough if overcooked.

Again, the shrimp when reheated will inevitably be tougher than when it was freshly cooked. But, yes, you can freeze leftovers!
When ready to eat, thaw overnight in the fridge and reheat on the stove.

If you do not live by the sea and don’t have access to a good fish market, buy frozen shrimp as that will be the freshest shrimp you can get. White or pink shrimp will work in this recipe! You can also get a few large prawns (head-on, skin-on) and cook just to decorate the pumpkin at the end.

This recipe should be made with a Cinderalla pumpkin or a Kabocha pumpkin. Those big orange pumpkins that you see at the supermarket are not as flavorful and should only be used for carving Halloween decorations! You can also do this dish in several individual mini pumpkins instead of a large one.

If you don’t have access to good tomatoes when it’s not their season (fall), you can use a 14-ounce can of chopped tomatoes instead. Preferably San Marzano!

I do not recommend making this recipe ahead, as shrimp can get rubbery when overcooked. You could, however, roast the pumpkin a day ahead. But make sure the pumpkin is completely heated when it goes in the oven with the stew, which means baking time will probably be longer.

To store leftovers, remove the stew into an airtight container. Then, scoop out as much of the pumpkin flesh as you can, storing it with the stew. Discard the pumpkin. The leftovers will keep well in the fridge for up to 3 days or can be frozen for up to 3 months. 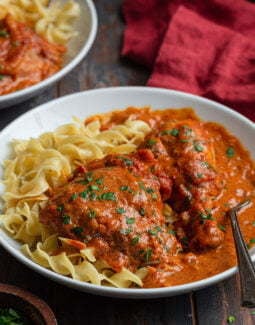 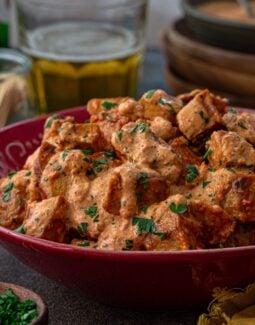 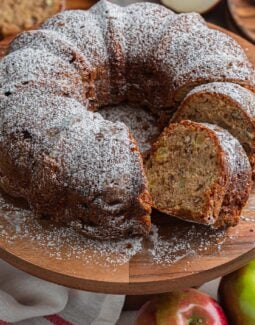 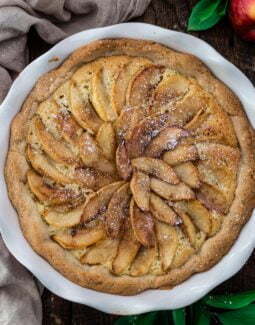