posted by Olivia Mesquita on March 30, 2016 30 comments »
Jump to Recipe
This post may contain affiliate links. Read our disclosure policy.
Jump to Recipe

This classic German Black Forest Cake – or Schwarzwälder Kirschtorte – has 4 layers of pure temptation and will make a great dessert for Mother’s Day or any other special celebration! 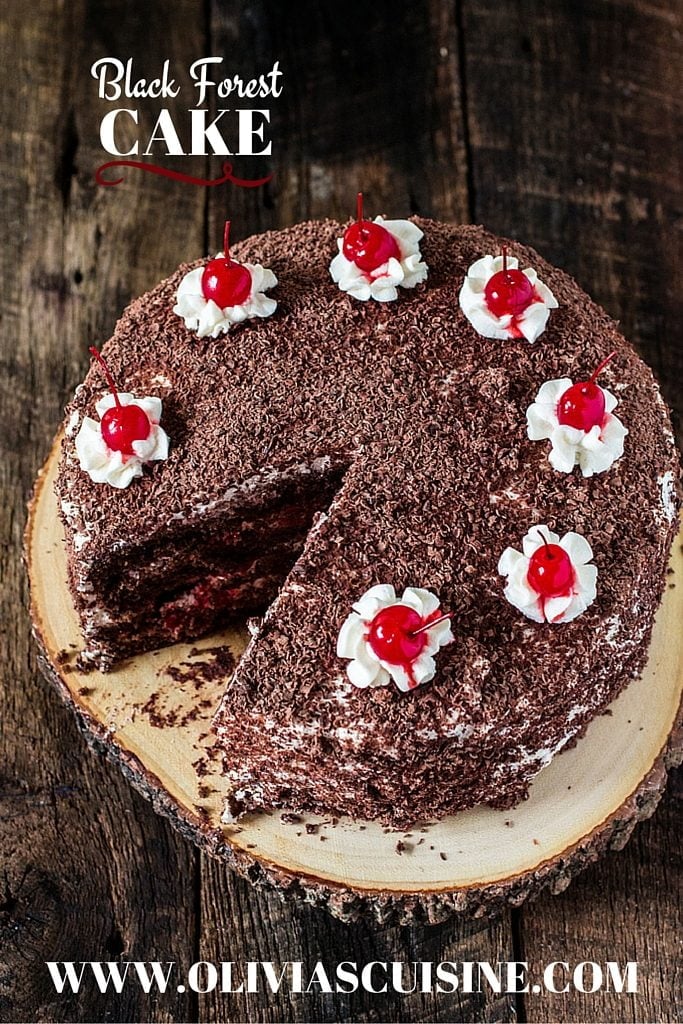 I hope you don’t mind that I’m sharing yet another dessert recipe. It’s the fifth one in a row, but who’s counting? Dessert is LIFE! ❤️

Besides, making a Black Forest Cake has been on my bucket list for ages. (Yep, I’m one of those annoying people that have a cooking/baking bucket list! I wanna cook the world!!)

Even though this cake is originally from Germany, it did make its way to Brazil and became really popular down there, making an appearance in lots of birthday parties every year! So much so that up until recently I thought this was an authentic Brazilian cake. Oops!

I am usually not a cherry lover, but the combination of chocolate, cherries and fresh whipped cream is something I cannot possibly resist! Add the little boozy flavor from the kirsch (cherry liqueur) and one bite of this moist goodness makes you understand why it is such a classic. 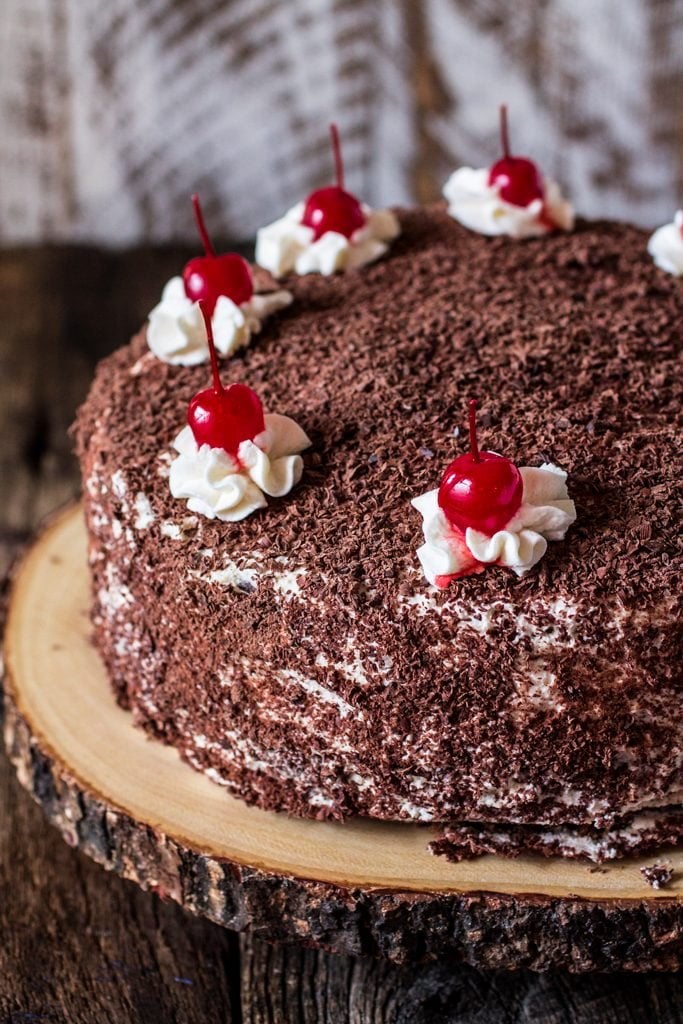 As I do with almost every dessert I make, I brought the leftovers of this cake to work. It turns out that on that day I was working with my friend Alex, who happens to be from Austria. He had a few slices and said that it tasted exactly like the cake his grandma used to make when he was little.

I couldn’t be more flattered! Ask any food blogger who specializes in international cuisine and they will tell you: There isn’t a better compliment than to compare us to foreign grandmas!

Most Black Forest Cakes here in the U.S. are overly sweet and lack the kirsch taste, so maybe that’s why my cake – which I like to believe tastes closer to the German version – brought tears to his eyes. (Ok, maybe he didn’t shed a tear, but that would make the story so much better, wouldn’t it?) 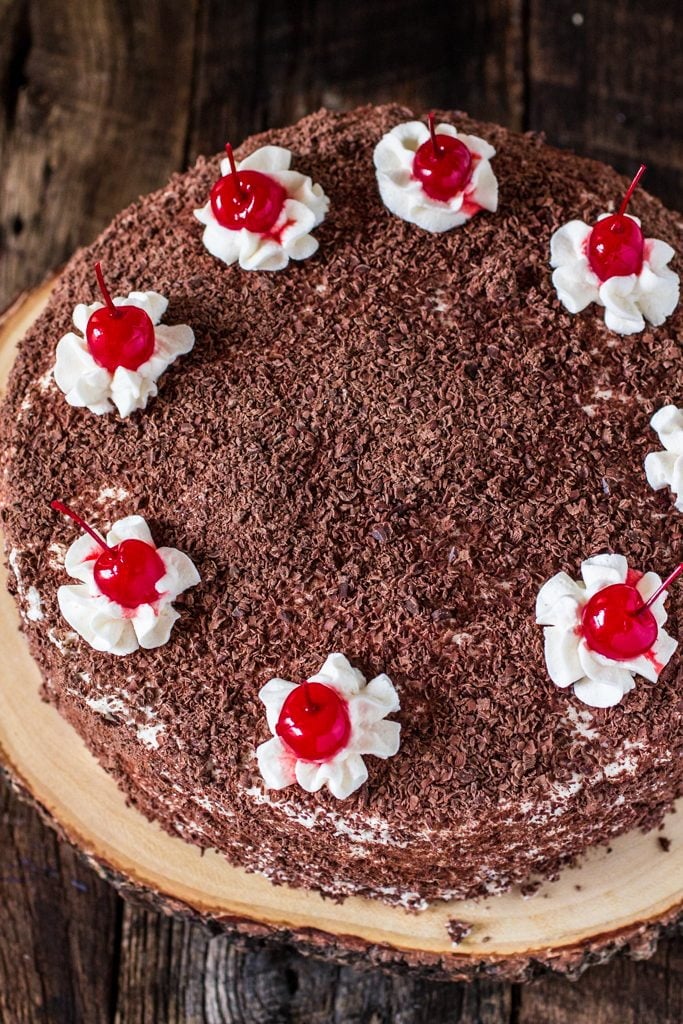 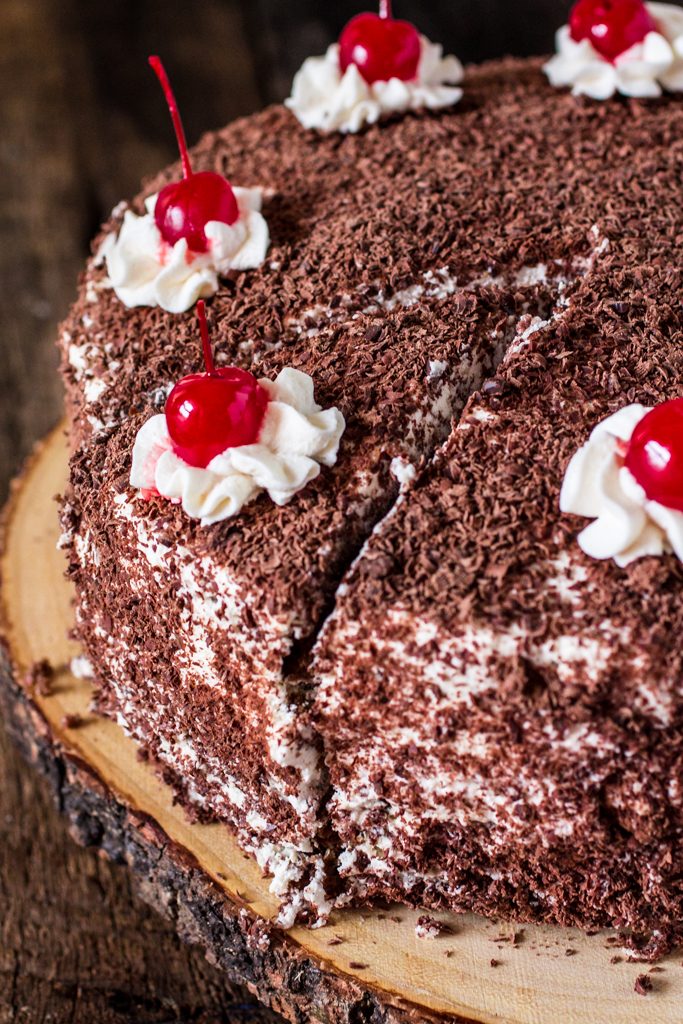 One of the legends say that the Schokoladen Raspel Belag, or the chocolate shavings that decorate the cake, look like the forest trees. Another says that the name is a homage to the kirschwasser liqueur, which is produced in the Black Forest region. And a third possible legend – and my favorite – claims that the cake was inspired in the traditional costume of country girls in some parts of the Black Forest, reflecting their black or dark brown skirts (chocolate), their white blouses (whipped cream) and their large cherry-red woolen bobbles, called Bollenhut.

There are even those who say that the cake (or the inspiration for it) may have actually come from Switzerland. Maybe, maybe not. We most likely will never know, so let’s focus on what matters, which is: EAT THE CAKE! 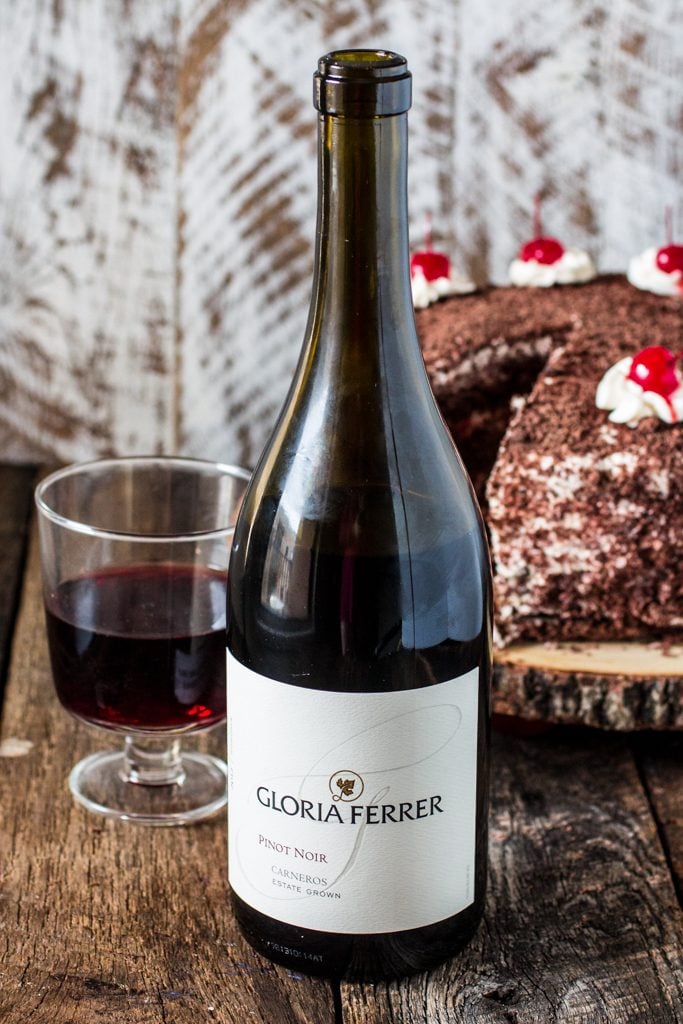 And now it’s the part where everything gets even more interesting. I paired my Black Forest Cake with a bottle of Gloria Ferrer Pinot Noir! I know pairing dessert with red wine is probably not something you would automatically consider, but believe me when I say: It can be so much fun!

The earthy and brambly Pinot Noir emits aromas of black cherry, cedar and spice with a smooth mouthfeel and long finish, which pairs perfectly with the bold flavors of chocolate and cherry from the cake.

I’m a huge Gloria Ferrer fan, as you may have noticed already. Their wines have earned over 400 gold medals and 50 90-plus scores in the last 5 years, and they produce estate grown still and sparkling wines that rival some of the world’s finest.

I like their wine so much that I even snuck in some bottles to Brazil, when we visited during the holidays. (Shhhh, don’t tell the Brazilian customs! ???) 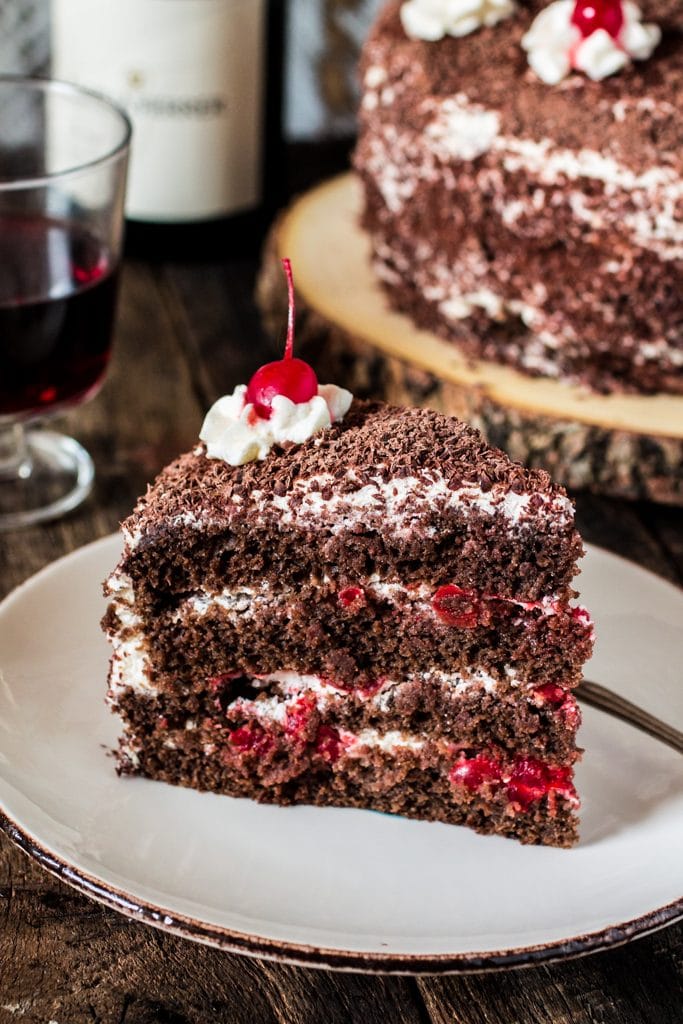 Before you go running to the store to grab the ingredients to make this delicious cake + your bottle of Gloria Ferrer, let me tell you that cherries are not in season right now.

But no need to despair. Even though this cake tastes better with fresh cherries, you can totally make it with frozen or canned sour cherries instead. Maraschino cherries can be used to decorate the cake, like I did here. (I totally plan on making this cake again as soon as cherries are back in season, so I can update the photos!)

You can also use cherry jam for the filling, but then the cake might be a little sweeter since you won’t be able to control the amount of sugar. But it’s a good alternative if time is an issue or if you’ve been wanting to get rid of that cherry jam that has been sitting on your fridge/pantry for a while now.

As for the kirsch, you can totally omit it if baking for a child. And, if kirsch is not available but you’d still like a little booze, rum is a good substitute.

And, finally, this cake improves tremendously after a day or two in the fridge. I’m usually one to have the urge to dig into a cake as soon as I finish frosting it, but with Black Forest I have to at least let it chill overnight, because I know it will taste AMAZING the next day! ???

If using canned (sour) cherries, use the juice from the can/jar instead of water, when making the filling. 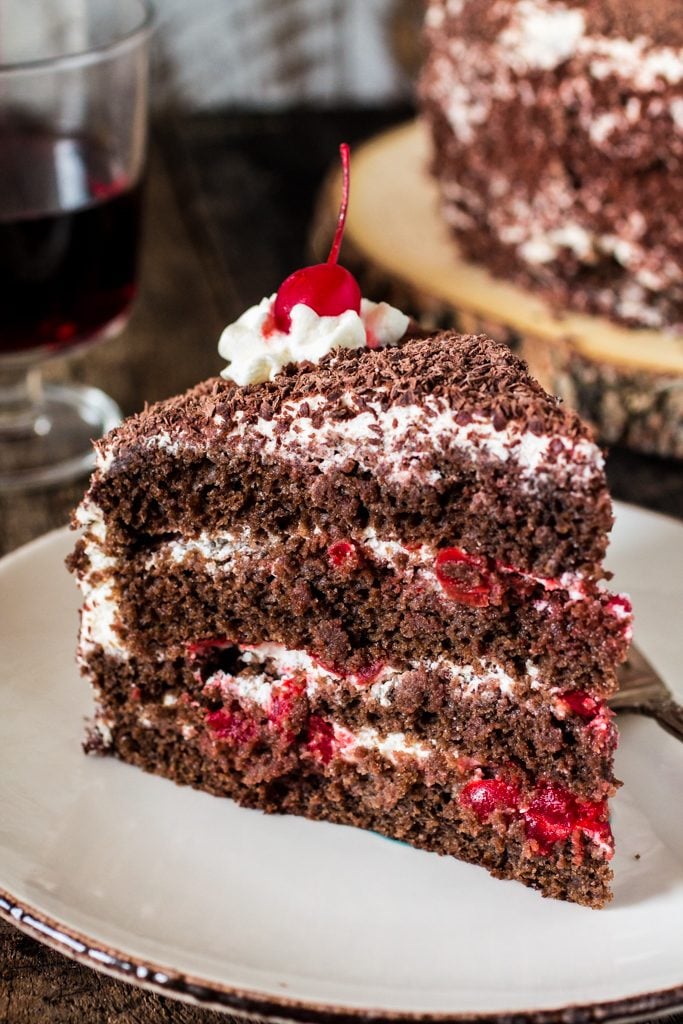 I was selected for this opportunity as a member of Clever Girls and the content and opinions expressed here are all my own.
Categories: Cakes, Christmas, Desserts, Dutch and German, Easter, Mother's Day