Home > Holidays and Seasons > Back to School > Brazilian Cream Doughnuts

posted by Olivia Mesquita on May 8, 2015 9 comments »
Jump to Recipe
This post may contain affiliate links. Read our disclosure policy.
Jump to Recipe
Powdered sugar mustache, anyone? 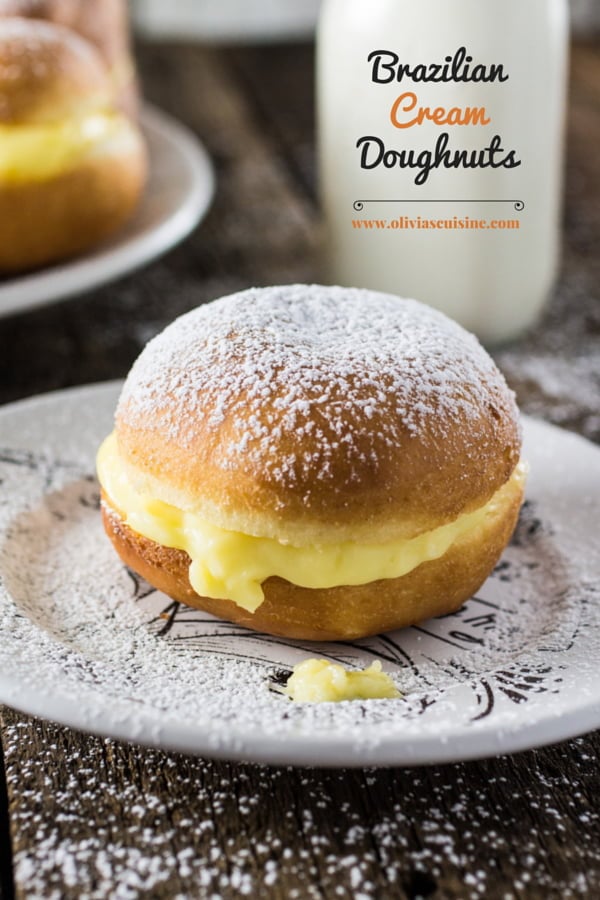 Good thing I decided to shoot those doughnuts (even though I’m not too thrilled with these pics). Because whatever post I had planned to share with you today had to be postponed and I suddenly had an editorial hole that had to be filled. (Oh the life of a food blogger…)

Life has been kinda crazy right now. Not only I’ve been obsessing with this apartment we saw on Sunday (that I really really REALLY wanna live in), but my dog Guinevere, back in Brazil, is not doing so great. I know she is old, but this is never easy, is it? Especially when you’re a bazillion miles away…
And, as I was trying to not worry about Guiny’s health while trying to get a hold of our realtor (who is really bad at communicating), I read something on Facebook that made me stop and take a breath. It said:
“Today’s To Do List:
That really inspired me and made me realize that I’m not doing most of those things – especially 2 and 5 – so I decided to start with number 7 by sharing it with you guys! Sometimes all we need is a little perspective. 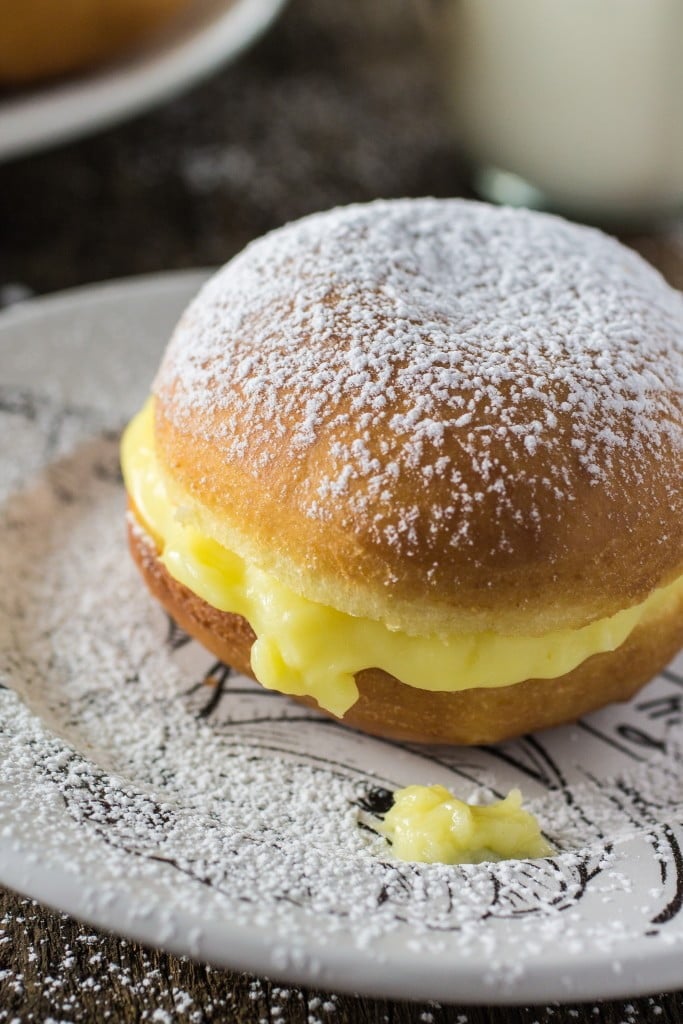 But back to doughnuts!
The name of these doughnuts in Portuguese is “Sonho”, which translates to “Dream”. I think it is very fitting as each bite feels like a dream. Wooow, way to be cliche, Olivia! :P
Anyway, these Brazilian Cream Doughnuts are a version of the German Berliners, probably brought by the Germans when they immigrated to Brazil. They are very popular in my country and you will find them in every padaria (bakeries).
My dad usually gets them for us on Sunday. That’s his day to make breakfast! He gets up mad early, as usual, and goes out for fresh bread and some other treats. Then he sets the table and wakes everybody up to gather at the table. He is so proud of “making breakfast”, even though it just means buying everything! (That’s not fair, sometimes he makes homemade pão de queijo!) 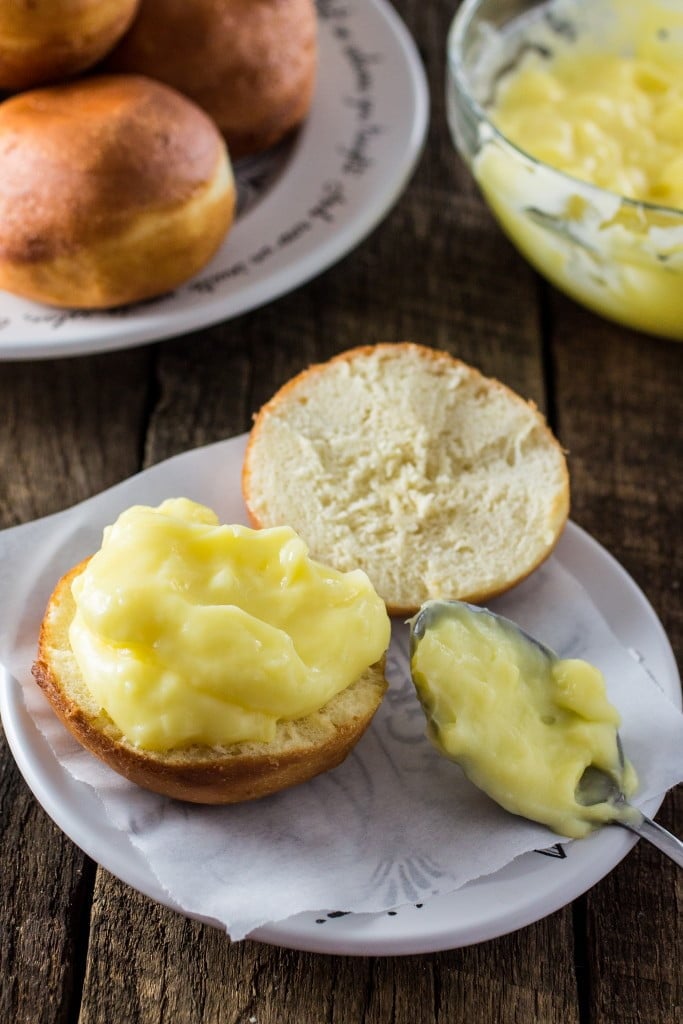 Before deciding to make these cream doughnuts – I was seriously craving them and now that I live in the U.S. it’s either make it or cry, because it’s not like I can go to the padaria to get it! – I had never made doughnuts before. I just had this idea that it would be incredibly difficult and complicated.
It’s so easy!!! With the aid of my stand mixer, I barely had to do anything but put the ingredients in the mixer, wait for the doughnuts to rise, fry them, make the cream and fill them. I was utterly impressed. Better yet, I brought them to work and they were utterly impressed! My co-worker Bill even said: “How does a human being make something like that?”. I don’t know about you, but in my book being called an E.T. is one of the best compliments ever! 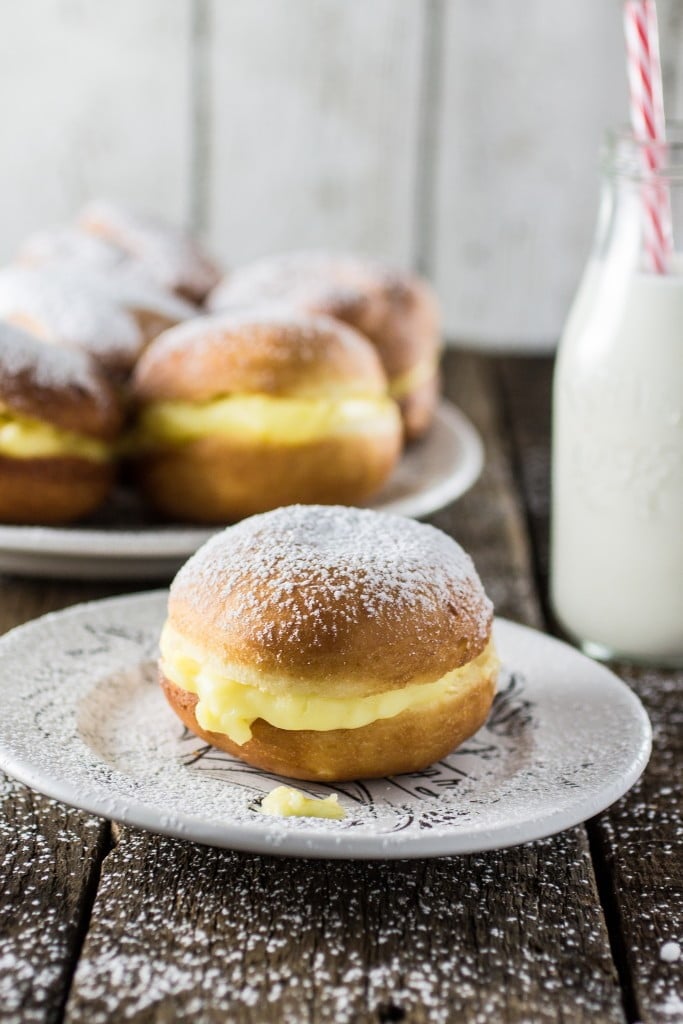 The difference between Brazilian doughnuts and regular doughnuts? They are much lighter in texture. Because of that they are perfect for breakfast, brunch or even an afternoon treat. Brazilians usually enjoy them with a cup of coffee!
Also, they might seem a little too much (although you can make them any size you’d like!) but you will see… there will be no way of stopping you from eating the whole thing!
I think these will be amazing for your Mother’s Day brunch!
Continue to Content