posted by Olivia Mesquita on June 9, 2016 13 comments »
Jump to Recipe
This post may contain affiliate links. Read our disclosure policy.
Jump to Recipe

It’s time to fire up the grill and make this delicious Chilean Steak Sandwich, aka Chacarero. No grill? Don’t fret! You can make this at home with a cast iron pan. 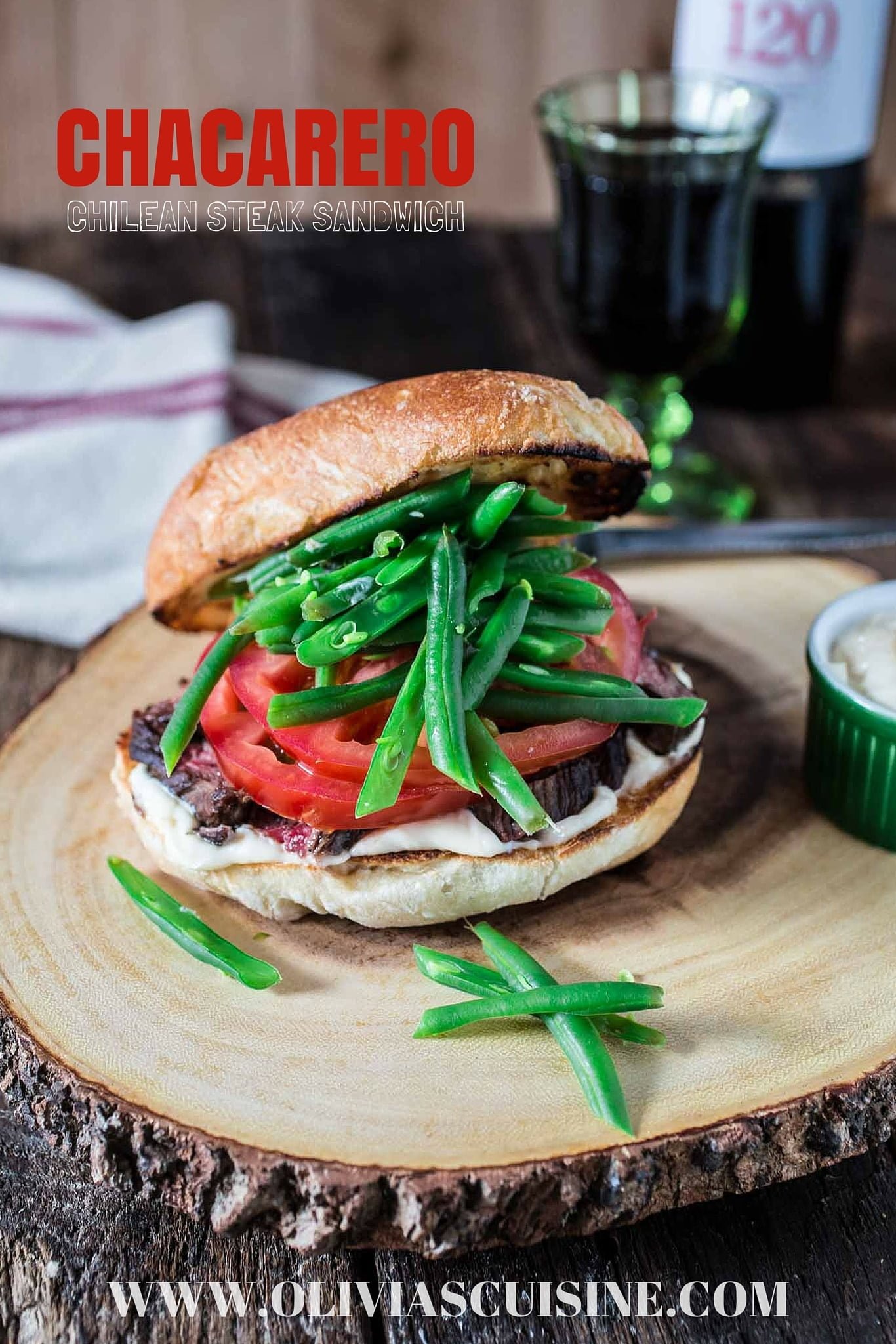 (This post is sponsored by my awesome friends at Santa Rita Wines.)

I’ve once heard that Chileans have a saying that goes like this: “If something tastes good, it will probably taste even better in between two slices of bread.”

Chileans love their bread and they eat it daily. The country consumes more bread than any other country (with the exception of Germany), averaging around 458 pounds per household per year. No wonder they have some of the most amazing sandwiches in the world, like the Barros Luco, the Choripan, the Lomito and, yours truly, the Chacarero!

In fact, the Chacarero – which is a steak sandwich topped with mayo, tomatoes, green beans and a drizzle of hot sauce – is so delicious that it made the list of “The 13 Most Amazing Sandwiches the World Has to Offer”, according to the Time Magazine. Yep, it is pretty damn good and if you haven’t tried it and you’re into insanely delicious sandwiches, you absolutely must.

The good news? A trip to Santiago isn’t necessary, because you can make this tasty sandwich at home! ? 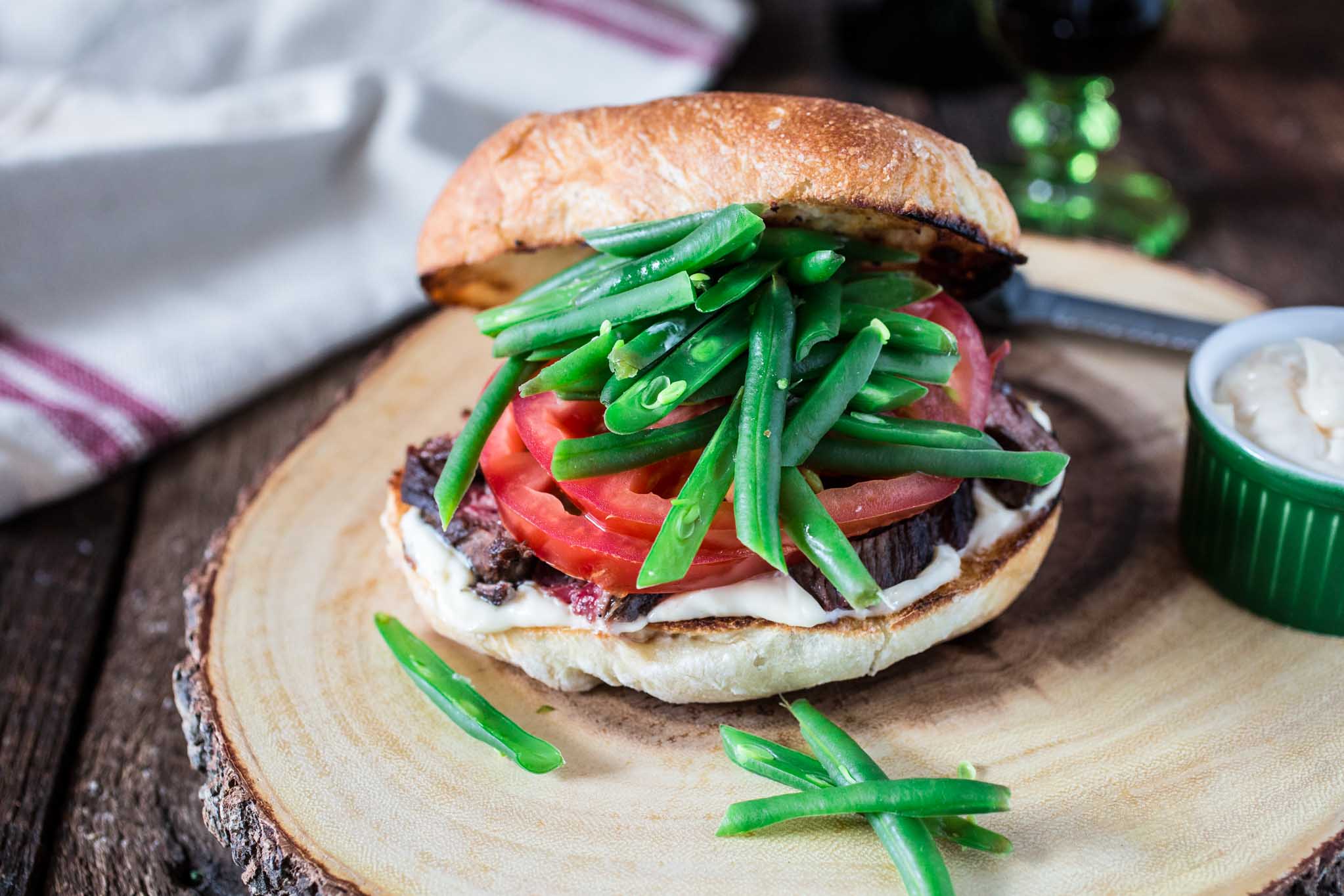 Now, you can probably find a hundred and one different versions of this sandwich on the internet, and even at restaurants. The formula (bread + steak + tomatoes + green beans) is the same, but people use different types of meat, bread and condiments.

I chose to use a flank steak, which I seasoned with Badia spices and grilled to perfection using my cast iron pan. Tim has been talking about getting a portable charcoal grill that we could take to the park when it’s nice out, but that hasn’t happened yet, so this apartment girl has to make the magic happen with a good old cast iron!

While the results are up to par with a steak grilled in an outdoor grill, I’m still perfecting my technique in the “smoking the whole apartment” department. We do not have an exhaust fan so I’m always worried I’m going to set up the fire alarm or get one of my super strict neighbors to come knocking on my door to complain!

I’ve recently learned to use a high smoke point oil – like grapeseed oil – instead of olive oil, which has a low smoking point, and that has helped quite a bit. If you have any more tricks that you would be willing to share with me, please comment below and let me know.  Smoking the whole apartment hasn’t stopped me from cooking steaks before, but I would love to make it less of a hassle! 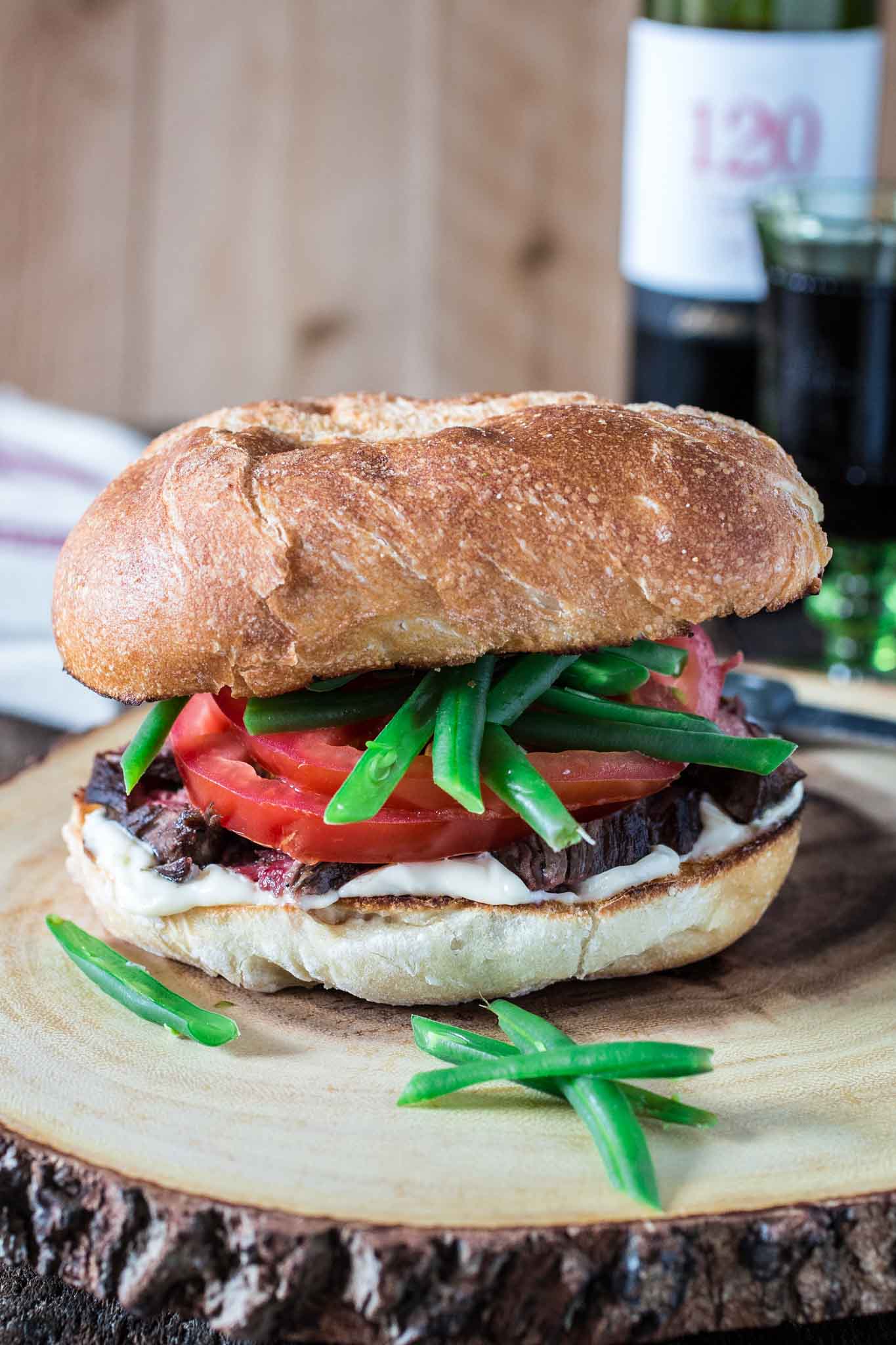 As for the bread, Chileans usually use frica, which is a lighter and round roll, for their Chacarero sandwiches. I wasn’t able to find it here in New York/New Jersey, so I ended up settling for these gorgeous Portuguese rolls that I saw in the store. You can use whatever type of roll/bread you fancy. Even burger rolls would work here!

Now as it’s the case with every other sandwich out there, please look at this recipe more as a guide than an actual “must follow exactly” recipe. Because one sandwich is not like the other and some people like to top their Chacarero steak sandwiches with an insane amount of green beans… ??? … while others just want a touch!

Once your sandwiches are ready, all that will be left to do is open a bottle of Santa Rita 120 Hero’s Salute Red Blend to enjoy with them! Because Chilean food asks for Chilean wine, don’t you think??? 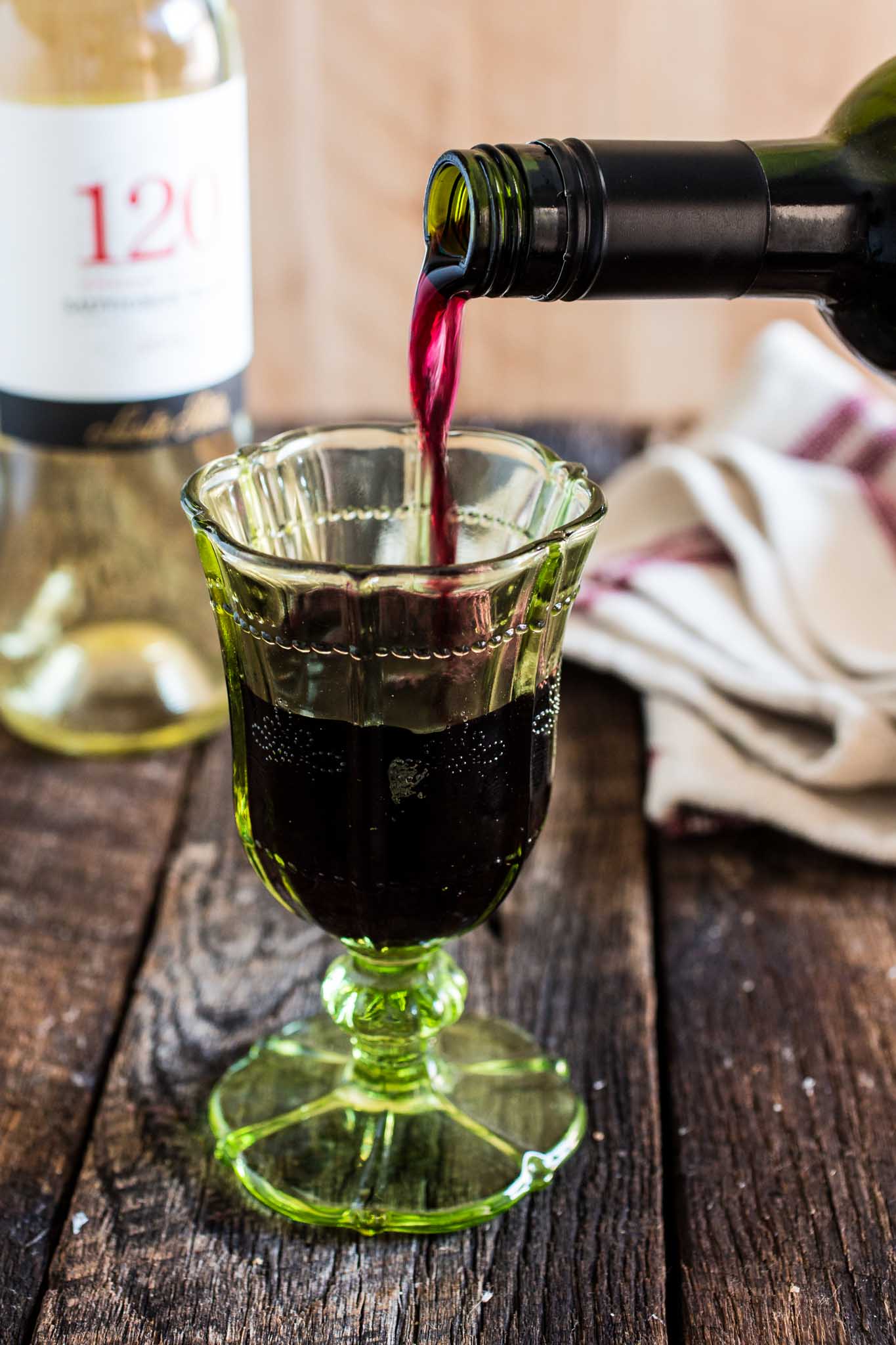 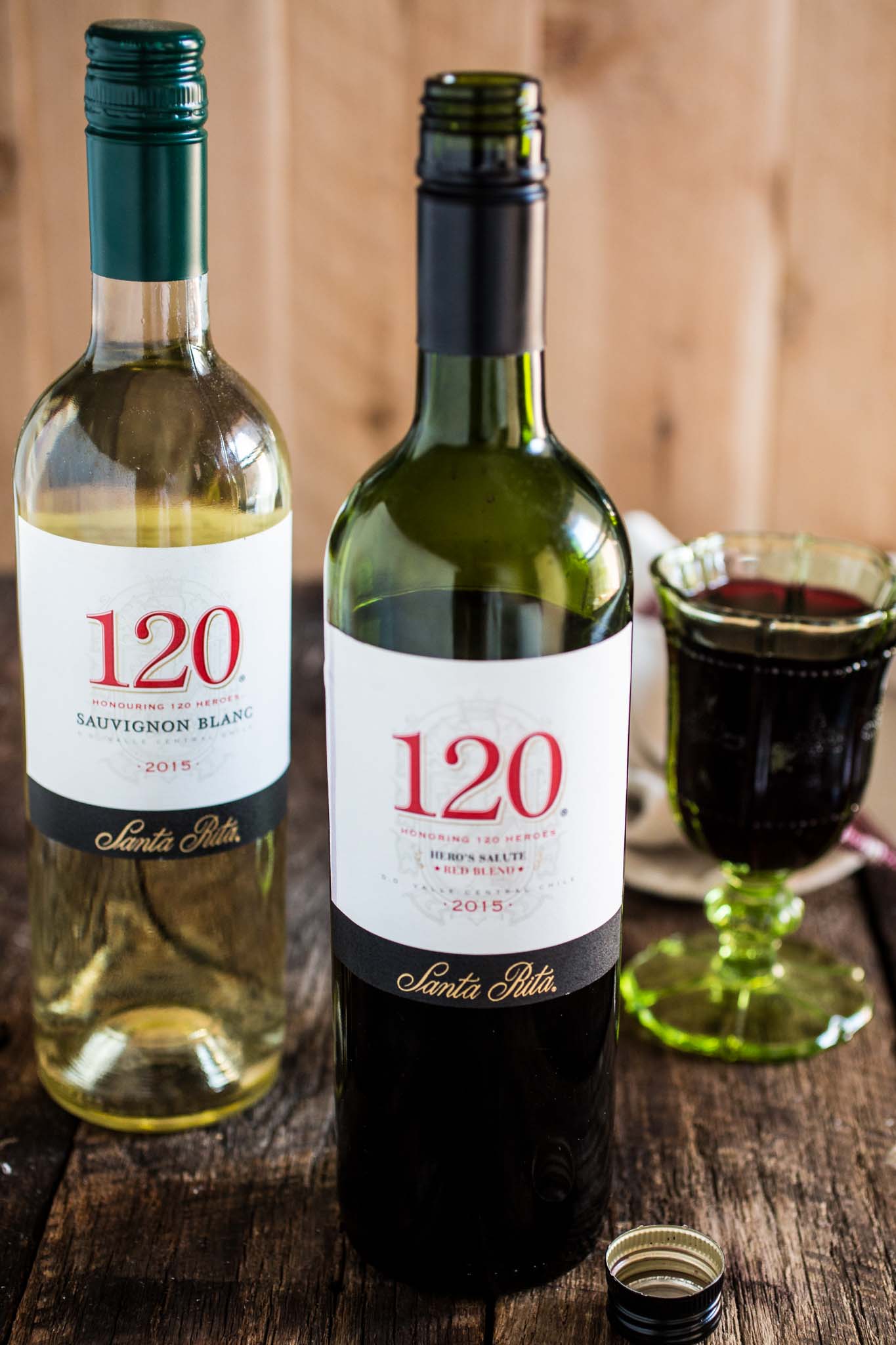 Chilean wine is one of my favorites, and I’ve been drinking Santa Rita since I was of legal drinking age in Brazil.

Their 120 wines are young, fresh, fruity, elegant and perfectly balanced with good acidity. Both red and white varieties are perfect for the summer and will go great with whatever you are grilling! Especially if it’s this steak sandwich. ❤️

An over the top steak sandwich paired with delicious wine? I seriously can’t think of a better way of celebrating summer!

Not to mention, this would be a great steak sandwich to make for your dad for Father’s Day. I know that because the first thing I told Tim, when I first bit this sandwich, was: “My dad would be so proud of me!”.

Sadly, my dad is back in Brazil and I’m in the United States. But the next time we see each other, I can guarantee he will ask me to make him one of these. I might get him to grill the steak though, because my dad kills at the grill!

I hope you guys enjoy it!