posted by Olivia Mesquita on July 1, 2014 2 comments »
Jump to Recipe
This post may contain affiliate links. Read our disclosure policy. 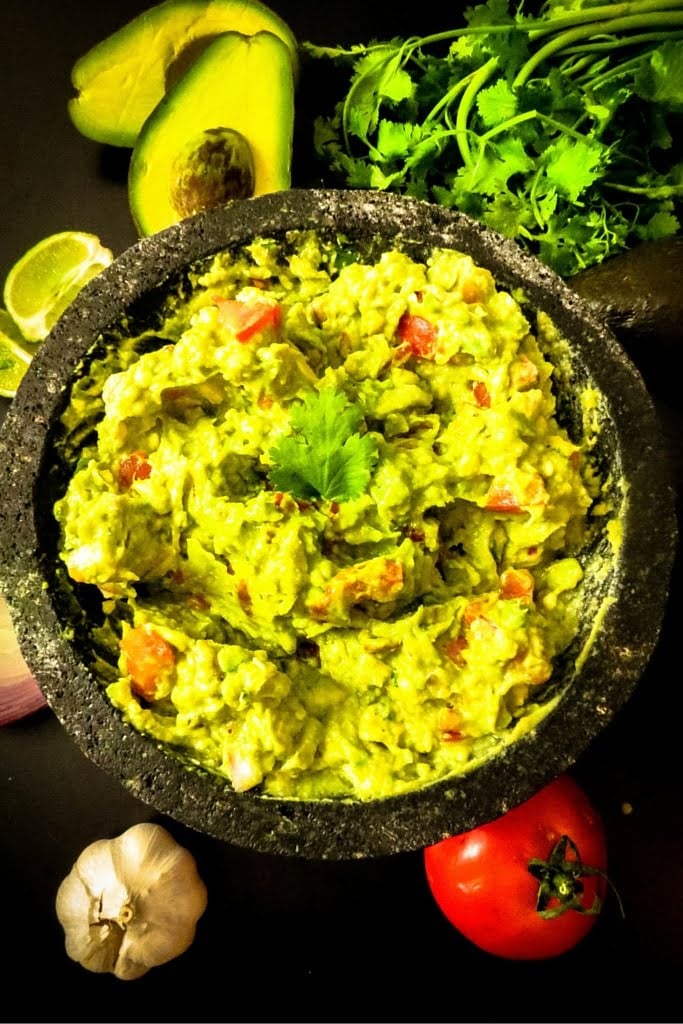 Happy Tuesday, friends! I would like to start by thanking you all for all the love and support. It really inspires me to keep going and learn more about this whole photography and blogging thing so I can share all my culinary adventures with you.This year, my home country of Brazil is hosting the World Cup. And even though I’m not too crazy about the idea of the World Cup being hosted in a country that needs to use its money in lots of other more important things, I decided to join the party and create a series of recipes based in the countries that are playing the World Cup.I decided to do only the countries playing the quarter finals, because otherwise it would be too overwhelming. Mexico, the country I’m honoring here today, lost to the Netherlands on Sunday and was eliminated. As I simply couldn’t leave Mexico (a country so culinarily rich) out, I decided to break my own rules! lol Two other reasons to do this post are: 1) Sharing my friend Kanoa’s recipe that is simple but to die for; and 2) In honor of a really good friend of mine – Estefania Gomez Ortega, who is Mexican! Estefania and I went to school together and I remember eating unbelievable Mexican dishes at her apartment.So back to the guacamole: it was invented by the Aztecs. They used to make a sauce called “ahuaca-mulli” – that means “avocado-mixture” – with mashed avocados, onions and tomatoes. The cilantro, garlic, lime, hot peppers and all other variations came only later.

The avocado, although savory like a vegetable, is botanically a fruit. It is native to Mexico and dates to between 7000 and 5000 B.C. Did you know that the Aztec word “ahuacatl” (avocado in english and abacate in Portuguese) means “testicles”? The Aztecs thought that testicle shaped fruit to be the “fertility fruit”. So it was believed to be aphrodisiac!  Not only because of that whole “testicle” part but also because it happens to be rich in vitamin E (known as the ‘sex vitamin’) and vitamin B6 (that regulates testosterone). Oh, and it also contains more potassium than another suggestively shaped fruit: the banana! ;-)It took me a while to like guacamole. In Brazil we eat avocados as a fruit in desserts and smoothies. My grandmother mashes the avocado, squeezes a lime and sprinkles some sugar on top of it and voila: a great dessert. Or she just blends that same mixture into a morning smoothie that is super delish! So imagine my denial when someone introduced me to guacamole: a savory dish! However, it didn’t take long for me to fall in love with it and today it’s one of my favorite foods from Mexico, but only if made right. I’ve lost count of the times I had terrible guacamole. My rule of thumb is: if it’s from the store, it’s bad. C’mon: its so easy and quick to make that I don’t understand why someone would buy the version full of preservatives at the grocery store. Also, if you’re ordering at a restaurant, make sure they serve it to you fresh, as the avocado browns quite quickly. One of the best guacamoles that I had ever have in a restaurant was prepared in front of me. They brought this cart with the ingredients and the molcajete (the traditional Mexican mortar and pestle for making guacamole and salsa) to our table and prepared everything with fresh ingredients!The recipe I’m about to share with you, as I told you earlier, is my friend Kanoa Greene’s recipe. When I first moved to New York, Kanoa was subletting an apartment in my building and we became friends. She is an amazing opera singer and an incredible fun person to be around. I don’t think I’ve ever seen her without a smile in her face. (And she has this huge smile that takes up half her face, so I think I would’ve noticed! lol). One day I bumped into her in the lobby and she had grocery bags. I asked what she was making that night and she told me she was making guacamole and invited me over. It was absolutely delicious. Back then I wasn’t that familiar with guacamole (I’ve had it before then, but not too often!) so I put olive oil on mine. And she will never let me forget that! LOL Anyway, thank you Kanoa for sharing your recipe with me! :-) I hope you’re enjoying Hawaii and I’m dying to go visit you!

So enough with all this talk and let’s get to it: 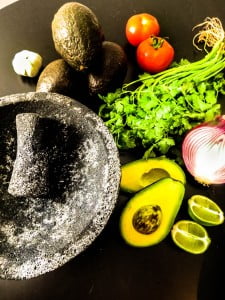 We start by halving the avocado, then removing the pits and scooping the flesh out. (They have to be the Hass avocados, that’s the best kind for guacamole). I recommend you use a spoon to remove the pit and scoop the flesh, as its the easiest way. In a molcajete (a bowl will work fine if you don’t have one!) roughly mash the avocados using the pestle or a fork. If you like your guacamole chunky, don’t mash too much. Immediately add the lime, as the lime will prevent the avocados from browning too quickly. 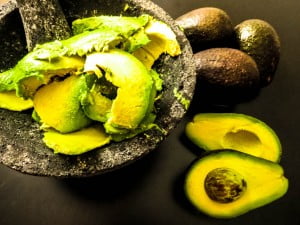 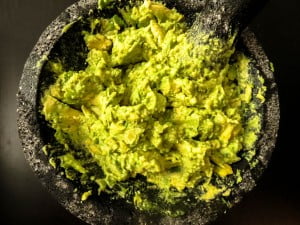 Add tomatoes, garlic, red onion and cilantro. The cilantro is optional. I’m not a huge fan of cilantro myself, so I only add a tablespoon or so to give a little authenticity! :) 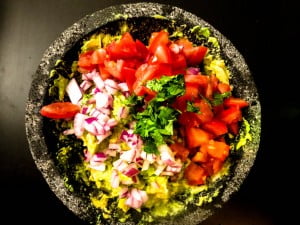 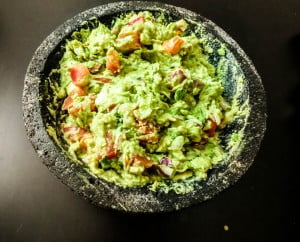 Then, mix everything together, add the salt, and your guacamole is ready! Easy, huh? You can serve it with anything you like: tacos, burritos, chili… I serve mine with lime flavored tortillas! :)

Now it’s time to open a cold Corona or make some Margaritas and enjoy the World Cup games… Not the Mexico ones though… Cause they were eliminated… But you already know that from the beginning of my post! :-P 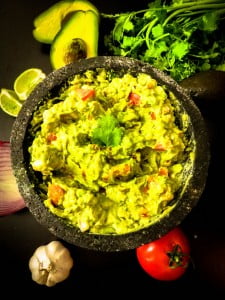 You can also add chili peppers to give it an extra kick! Adapted from Kanoa Greene's recipe
Author: Olivia Mesquita 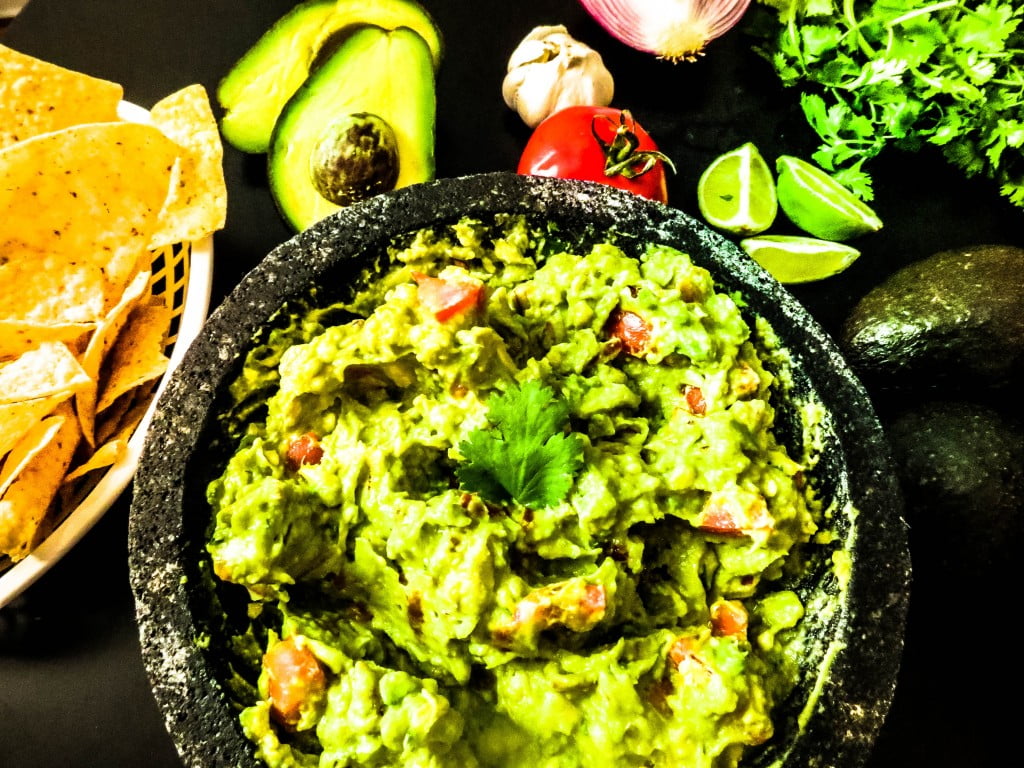