posted by Olivia Mesquita on March 2, 2015 64 comments »
Jump to Recipe
This post may contain affiliate links. Read our disclosure policy.
Jump to Recipe

One of my favorite desserts, this Brazilian Flan is made in the blender and only requires 5 ingredients! 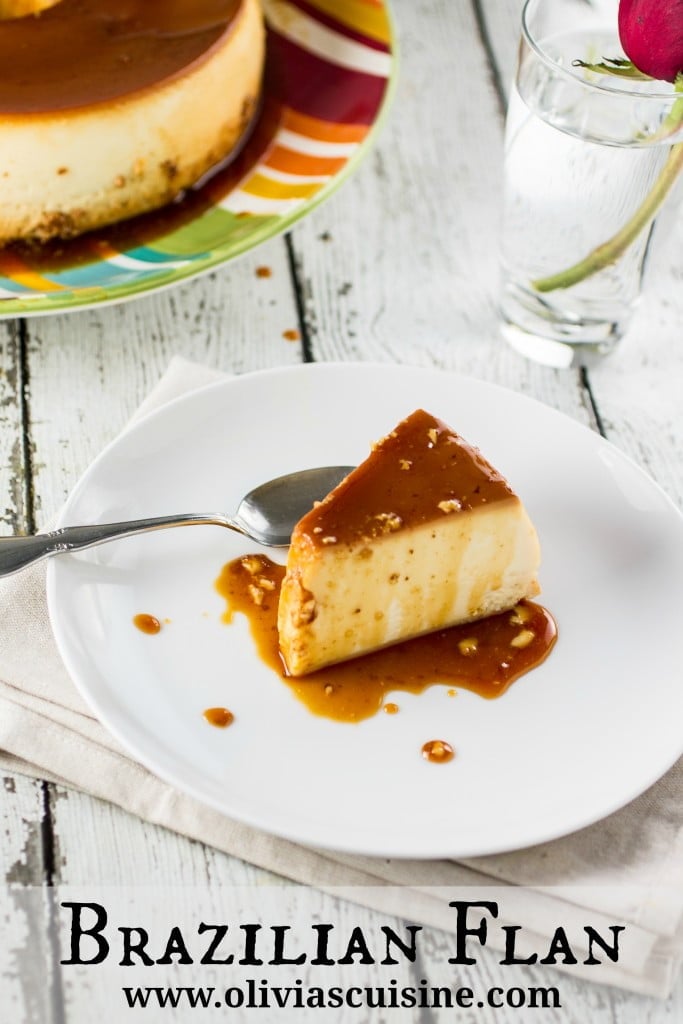 What do you love the most in life?
I love feeding people! I mean, I really really enjoy seeing everyone letting go to their animal instincts and devouring my food as if there won’t be any food left ever again. Is that bad?
It’s not like I want anyone to develop an eating disorder, but which cook doesn’t love to see people enjoying their creations? And what better way to see if a recipe works than to see everything vanish in a matter of minutes?
That happened with this Brazilian Flan. While I was testing recipes I realized Tim and I couldn’t possibly eat all that flan by ourselves. So I brought one to work to share with my coworkers and, oh my, it was a huge success! Even the dieters decided to indulge a bit by having a spoonful that turned out to be a whole big slice. 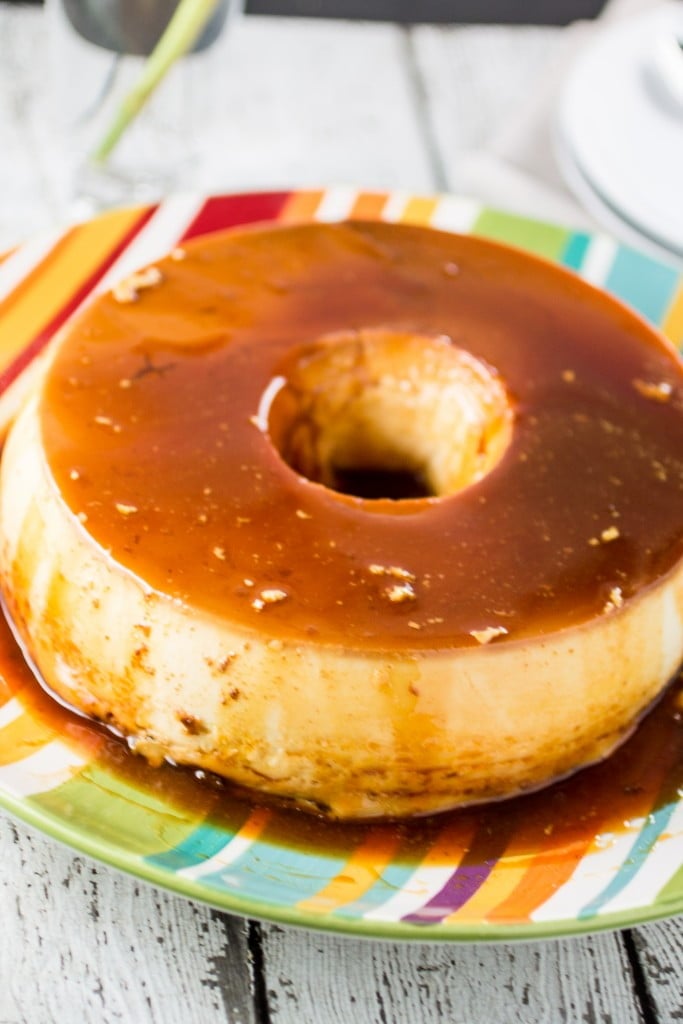 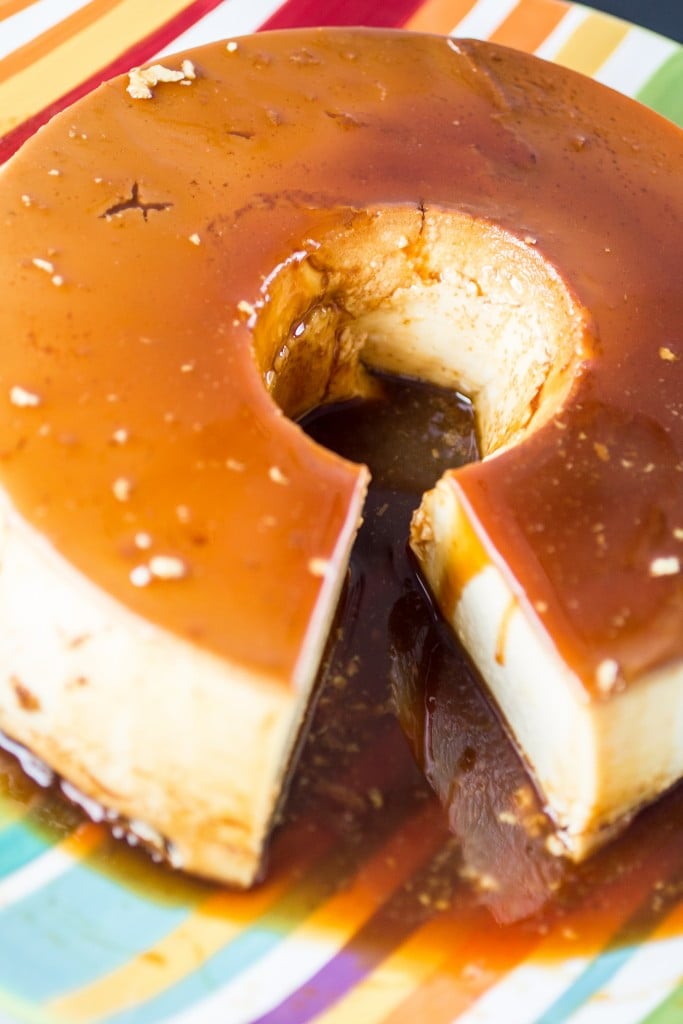 Flan is a very popular dessert in Brazil. It is in every single restaurant menu, at parties and at every family’s table. I grew up having flan at least once a week.
I believe that its popularity is given not only to its deliciousness but also to how easy it is to make. I was impressed that my coworkers were so surprised flan was this good. I guess they haven’t been eating the right (ahammm, Brazilian!) kind of flan. Because in Brazil it is really rare to eat bad flan, or as we call in Portuguese, ‘pudim’.
Although every family has its recipe – and swears by it – they all revolve around the same 3 (or 4) ingredients: eggs, sweet condensed milk and milk. Oh, and sugar and water for the caramel sauce. That’s it! Some people, like me, add a little vanilla extract but the basics are the same everywhere. The proportions of these ingredients is what changes. So there’s really no way a recipe will taste dramatically different than the one you love and are used to eating. Except mine! Mine’s better! :P 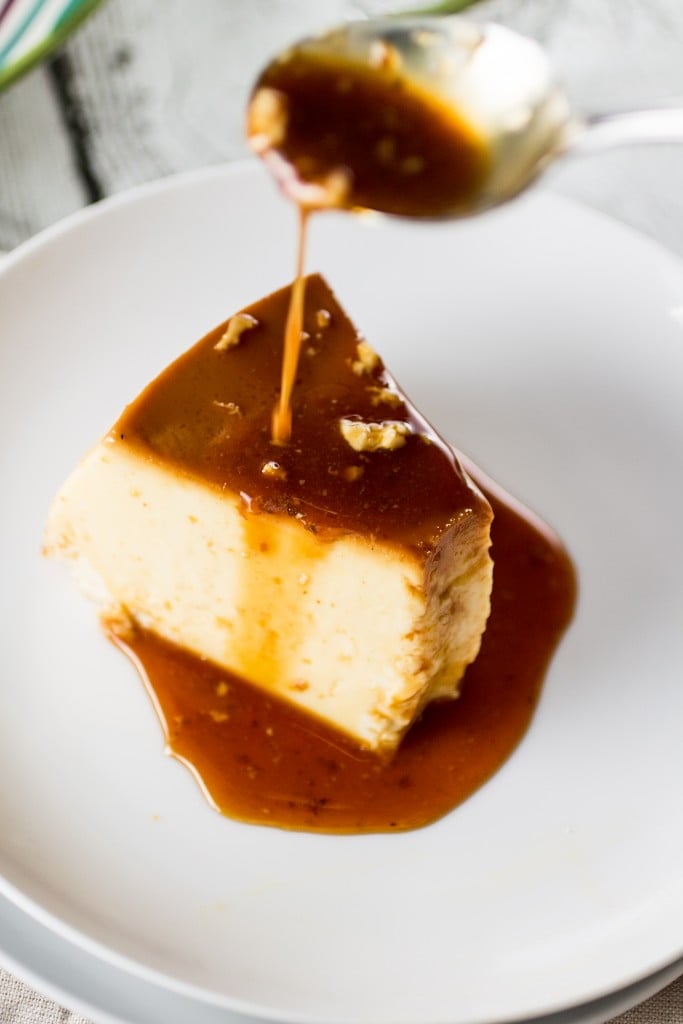 Some people believe that the Brazilian Flan, or “Pudim”, originated from a simple recipe made by a Portuguese abbot, called “Pudim de Priscos”. Consisting of sugar, yolks, water, Port wine and pork lard (I know! Weird!), his recipe was an absolute success wherever it was served.

However, the abbot refused to share his recipe with anyone. And, to prove that nobody could make his creation with such perfection, he held a public competition against a professional pastry chef. Of course, the abbot won the duel and proved that he was the only one that could make that delicious flan. Unfortunately, his recipe collection disappeared mysteriously after his death. I guess we have to thank the abbot for having that silly duel so we could have a glimpse of his recipe, cause otherwise flan wouldn’t exist. 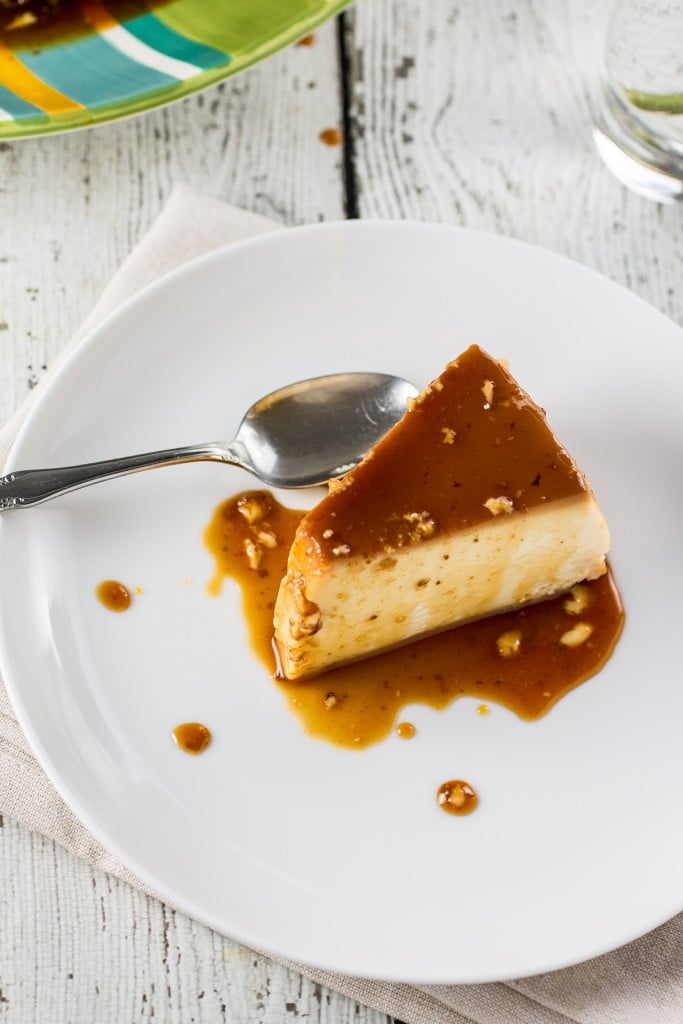 A few considerations about this recipe:

– I made 2x the recipe for the pictures in this post. I just wanted it to be tall and beautiful for the pics. You can double the recipe below if you want your Brazilian Flan to look exactly like that.

– You can also make the flan in small individual angel food pans or in ramekins (but then it won’t have the characteristic hole in the middle).

– Make sure your angel food pan has a solid bottom and not a removable one, or you flan mixture will leak.

– Baking it in bain marie is absolutely necessary so it can bake slowly until the ideal texture.

– The longer you let it blend, the better. I do it for about 5 minutes. That way the flan will be super smooth!

– You can make more caramel to serve on the side, if you want!

– My coworkers described the flavor as similar to creme brûlée. If you like creme brûlée, you will definitely like this recipe! 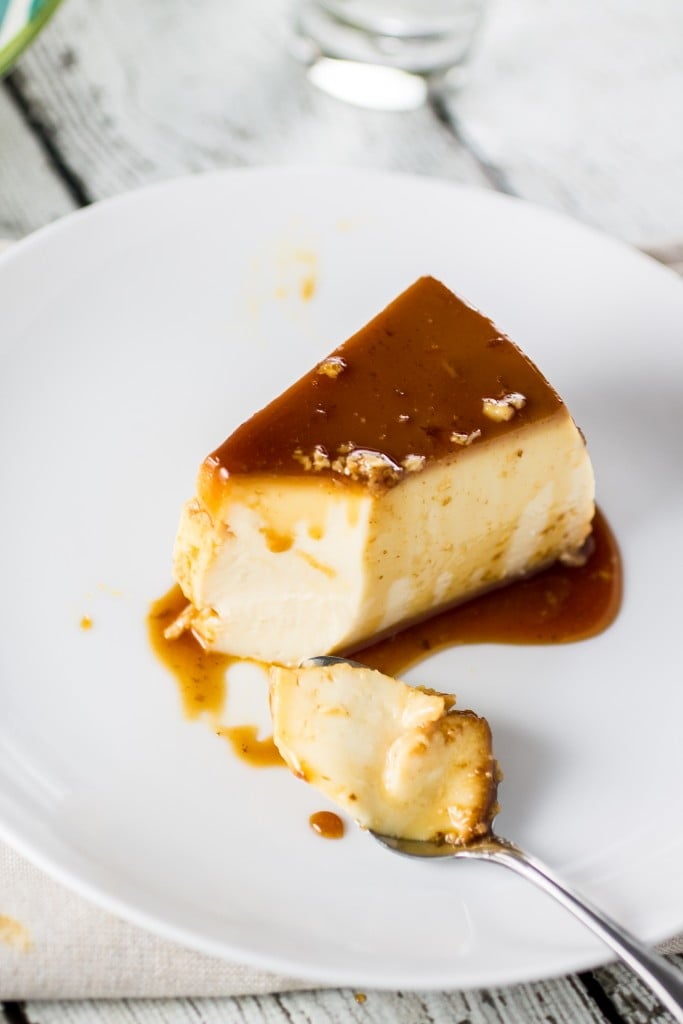