posted by Olivia Mesquita on May 7, 2019 2 comments »
Jump to Recipe
This post may contain affiliate links. Read our disclosure policy. 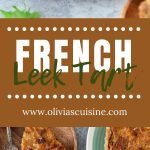 Made with leeks, bacon and Gruyère, this luscious Flamiche aux Poireaux is perfect for an elegant brunch or a light dinner. Easy to make, yet impressive enough for special occasions, like Mother’s Day!

Everybody loves a good dessert tart! But what about savory tarts?

While quiches are constantly being devoured world wide, I feel like the other savory tarts are not getting the spotlight they deserve.

Take this French Leek Tart, for example, hereby called by its French name Flamiche aux Poireaux because I like to be fancy. How could anyone resist a flaky buttery crust filled with an out of this world mixture of bacon, leeks, shallots, cream and cheese? I’ll take that over a dessert tart any time!

I especially love this recipe because, despite the fancy name, it is easy and versatile. It can be served both as an appetizer and as a main dish, accompanied by a green salad.

And while I like mine warm, it is often served at room temperature, so you can make it ahead of time if you want!

What is Flamiche aux Poireaux?

Flamiche aux Poireaux is a French tart (flamiche) made with leeks (poireaux), and a culinary specialty of the Picardy region of northern France.

The word flamiche, of Flemish origin, means “cake”. Once upon a time, back in the Middle-Ages, a flamiche was a slab of dough that was eaten hot, with butter. It was only much later that it became a sort of tart, sweet or savory, topped with seasonal fruits or vegetables.

While I’ve seen it resembling more like a quiche, a true flamiche to me is not supposed to be custard-y. It still has eggs in it, but only enough to bind everything together.

How to Clean and Slice Leeks

I simply adore leeks! I’m always looking for ways to use them, my favorites being this tart, my mom’s Creamy Leek Spaghetti and my Gruyere, Bacon and Leek Quiche.

However, if you are not used to cooking with them, they can be a little intimidating. What’s with all that grit? Am I supposed to eat the hard leaves?

But don’t fret! I’ve got you covered.

First things first, when buying leeks, make sure to grab the ones that are firm and bright green.

If they look wilted and yellowish, they are past their prime. If they are mostly dark green, you won’t get much out of them, since you will only use the white and light green parts. Also, for best flavor and tenderness, choose the ones that are smaller in diameter.

As for the dirt, it is normal. Leeks are grown in trenches and the stalks buried in dirt as they grow so they blanch and stay tender. Because of that, they must be cleaned thoroughly before consumption.

The best way to clean them is to trim the top, which is the thick, darker green part, and the bottom off. Then, thinly slice the stalks into rings and transfer to a colander. Rinse under cool running water until dirt free, and drain before using.

Alternatively, if your recipe calls for halved leaves, just cut them in half lengthwise. Keep the roots in as it will hold the leeks together when you wash them. Then, rinse each leek under water, using your fingers to gently spread the layers and dislodge any dirt.

Pro tip: Keep the tough parts! If you wash them well, they can be used for stock.

How to make French Leek Tart