posted by Olivia Mesquita on February 27, 2015 55 comments »
Jump to Recipe
This post may contain affiliate links. Read our disclosure policy.

Caldo Verde is how the Portuguese do comfort food! It’s a popular Portuguese soup made with collard greens (or kale), potatoes, sausage and bacon. It tastes like um abraço (a hug), especially on a chilly day!

If you love warming up with a bowl of delicious soup, make sure to also check out my Canja de Galinha, Pasta e Fagioli Soup and Caldinho de Feijão (Brazilian Black Bean Soup).

It is no surprise that Brazilian cuisine has a lot of Portuguese influence.

I couldn’t possibly list all the delicious Portuguese or Portuguese-descendant dishes we have down there. Amazing sea food dishes, bacalhau, roasts, stews, breads, sonho (bola de Berlim), decadent pastries and desserts and many others. The Portuguese definitely know how to eat and they brought a lot of their classic recipes across the sea to Brazil!

Caldo Verde is one of those Portuguese recipe that are so popular in Brazil that most Brazilians don’t even know that it is originally a Portuguese soup.

So, without any further ado, here’s my version of this beloved soup! It is one of my favorite soups to make during the colder months and it never fails to warm me up from soul to body.

P.S. If you’ve been following this blog for a while, you’ll notice that this is an updated recipe! I have adapted the old recipe, making it easier to make without compromising on flavor. I hope you guys love this version even more! ♥️

What is Caldo Verde?

Caldo Verde – which translates to Green Broth (or Green Soup) – is a Portuguese soup consisting of finely shredded couve-galega (a type of collard greens in Portugal), potatoes, olive oil, onion, garlic and sausage. It originated in northern Portugal, in the Minho Province, between 1936 and 1976, but today it is popular across the nation. Some people even say it’s the national dish but I disagree! (Hello? Bacalhau?!?) Like I mentioned before, It is also very popular in Brazil.

In Portugal, it is traditionally served during celebrations, such as weddings and birthdays, often accompanied by broa (Portuguese cornbread).

To make Caldo Verde, you will need:

How to Make Caldo Verde

While this is an easy soup, you should reserve some time for prepping. Depending on your knife skills, slicing the greens can be a little time consuming!

That being said, the more you practice this, the faster you’ll get. So future caldos verde will be a breeze! 😉

Here’s how I make this Caldo Verde recipe. As always, you will find the printable (and more complete) version of the recipe at the end of this post!

Step 2: Make the Caldo Verde Base.

Step 3: Brown the sausage and bacon.

This soup is great served as an appetizer or as a light course for a late supper, for example. I find it to be very satisfying, because of the sausage and potatoes, so I’m usually good with a bowl of this soup and a slice of bread for dinner! Maybe accompanied by some Rosemary Focaccia? Yum!

It is also customary to serve it with extra olive oil for drizzling at the table.

Caldo Verde is delicious as it is, but there is always room for modifications! Here are a few suggestions:

Can I make Caldo Verde ahead of time?

Yes, this soup can be made ahead and reheated! To reheat, warm over low heat, adding more broth or water as needed.

How long will leftovers keep?

Leftover Caldo Verde will keep for 3-4 days stored in an airtight container in the fridge.

Can you freeze Caldo Verde?

Yes, since the potatoes are blended into the soup, this soup freezes well. It will keep in the freezer for up to 3 months. 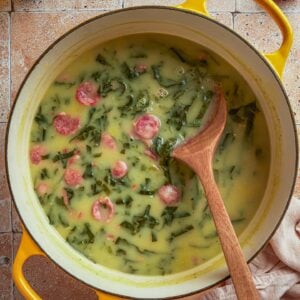 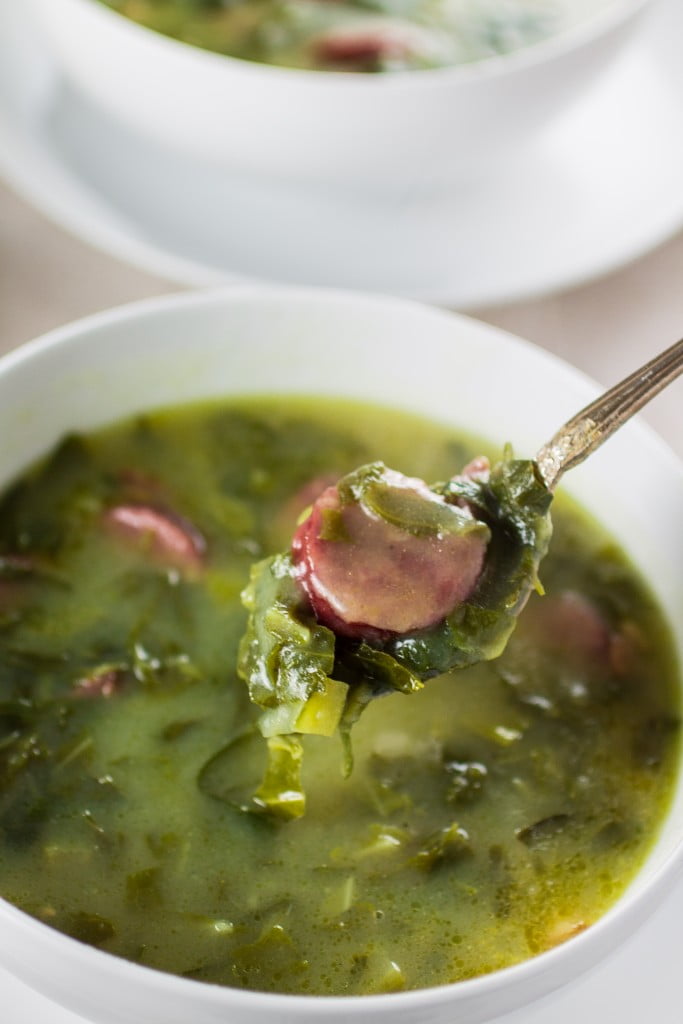