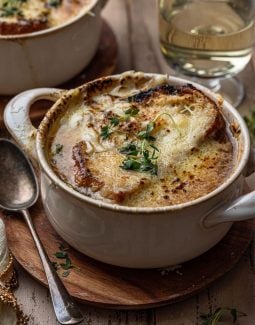 French Onion Soup, or Soupe à l’Oignon Gratinée, is a French classic that is guaranteed to impress! A rich and hearty soup, made with onions that are caramelized to perfection, topped with crusty bread and two types of cheese and then gratinéed until ooey-gooey, browned and completely decadent. Perfect for a romantic dinner for two or for an elegant dinner party!

Looking to add more classic French recipes to your repertoire? I recommend you also check out my Sausage and Chicken Cassoulet, French Leek Tart, Boeuf Bourguignon and Gougères.

Welcome to what I am calling a series of “sexy recipes” leading up to Valentine’s Day!

To start, one of the sexiest recipes of all times: French Onion Soup. Because who can resist a bowl of this decadent soup, especially when topped with garlic bread and bubbly cheese?

“Did you say garlic bread? For Valentine’s Day dinner?”

Yes, I did! But don’t worry. It is only slightly garlicky, enough to give the bread an interesting flavor but not garlicky enough to send your V-Day date running for the hills because of your vampire-repelling breath!

And as for the onion breath… Well, I can’t help you with that. There are 3 pounds of onions in this recipe. But I’ll be damned if you care after tasting this insanely delicious soup! 😋

What is French Onion Soup?

French Onion Soup is a classic French soup made of onions and beef stock, which is often served gratinéed with bread covered with cheese.

Onion soups date as far back as Ancient Rome, prepared for the first time over 8,000 years ago. However, the version that became popular in Parisian restaurants (and eventually the world) originated in Paris in the 18th century.

There are two interesting theories regarding the creation of this soup, both involving King Louis XV and his family.

The first says that he returned to his lodge from a hunt to find that his cupboards were bare except for onions, butter and champagne. So he and his great-aunt, who was staying with him, threw everything in the pot and created the first classic French onion soup recipe. In another variation of this version, King Louis was actually hosting a party in his hunting lodge when he became ravenous, which led him to raid the lodge’s pantry trying to find food.

The second legend claims that the Duke of Lorraine (Stanislas Leszczynski), who was Queen Marie’s father and, therefore, Louis XV’s father-in-law, was the one who discovered this onion soup. While he was on his way to the Palace of Versailles, he stopped at an inn called La Pomme d’Or in Châlons-en-Champagne, where he was served the soup. He found it so delicious that he went to the kitchen to ask to see how it was made. And even though “the smell of the onion […] brought great tears to his eyes”, he watched Nicolas Appert (the chef) dice lots of onions and copied down the whole recipe. Those who believe this version use as proof the fact that Nicolas Appert dedicates his recipe to the duke in his cookbook (published in 1831) by naming it onion soup à la Stanislas.

That being said, it was in restaurants surrounding les Halles – the Poule au Pot, Chez Baratte, the Pied de Cochon – that this soup gained its popularity, due to the addition of one key element: the gratinée.

The French Onion Soup is considered the ultimate hangover cure. When it was introduced to the Parisian court, it gained the nickname “the soup of the drunkards” because people realized it was very effective at covering the smell of alcohol after a night of drinking. To this day, it is tradition in France to serve this soup at weddings – long after the cake has been served – to prevent a hangover the next day.

To make this French Onion Soup recipe, you will need:

No, there is no need to add sugar to caramelize onions. Onions already have natural sugars that are intensified when they are slow cooked.

The sherry, albeit dry, also brings a slight sweetness that helps balance the bitterness from the onions.

If, at the end, you taste the soup and think it is bitter and could benefit from a pinch of sugar, by all means, go for it! I prefer you use the sugar to correct the seasoning at the end than add it in the beginning and end up with a too sweet soup that you won’t be able to fix.

How to Make French Onion Soup

French onion soup, like several other French recipes, can seem intimidating. But it doesn’t have to be!

This is an easy recipe and pretty much foolproof, if you don’t cut corners. If you caramelize the onions properly and use good wine and good beef stock, you will have an onion soup that is so delicious that it doesn’t even need the bread and cheese.

Here’s how I make this French Onion Soup recipe. As always, you will find the printable (and more complete) version of the recipe at the end of this post!

In my humble opinion, when served as an entrée, this soup is already filling on its own. But if you wish to complement it, a simple green salad – or even a more extravagant French salad – is a good option.

This soup can also be served as an appetizer. Perhaps as the beginning of a wonderful French feast, featuring French Mustard Chicken or Roasted Chicken with 40 Cloves of Garlic, green beans and a side of Potato Gratin Dauphinois.

This French onion soup recipe can be paired with either white or red wine.

According to Wine Folly, a classic pairing of French onion soup and Beaujolais, preferably a Cru, is the way to go. They suggest Fleurie, Saint-Amour or Chiroubles AOCs as their plum, cherry and peach flavors complement the distinct sweet flavor from the caramelized onions.

If you choose to go with a red, a Sangiovese, like Rosso di Montalcino, has the right acidity to cut through the richness of the soup, pairing beautifully with the intense beefiness and softening the fat from the cheese with its tannins.

Can I make French Onion Soup ahead of time?

Yes, you can make the onion soup part of this recipe up to 2 days ahead. Refrigerate in an airtight container until ready to use, then reheat before assembling the bowls. You can also make the garlic bread a day ahead and store it at room temperature.

Can I freeze this soup?

Yes, the soup (without bread and cheese) can be frozen for up to 3 months.

Is it possible to make this recipe without alcohol?

Yes, just omit the white wine and sherry and use the stock to deglaze the pot. 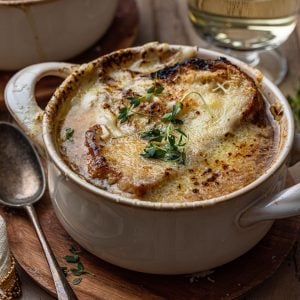 Servings: 4
Prep Time: 15 mins
Cook Time: 1 hr 30 mins
Total Time: 1 hr 45 mins
author: Olivia Mesquita
course: Soup
cuisine: French
French Onion Soup, or Soupe à l'Oignon Gratinée, is a French classic that is guaranteed to impress! A rich and hearty soup, made with onions that are caramelized to perfection, topped with crusty bread and two types of cheese and then gratinéed until ooey-gooey, browned and completely decadent. Perfect for a romantic dinner for two or for an elegant dinner party!
No ratings yet
Print Recipe Pin Recipe Rate Recipe

Serving Size: This soup serves 4 as an entrée or 8 as an appetizer. If serving 8, you will need to divide the bread slices in half or use a baguette, which will yield smaller sized slices, to make 8 slices. No ovenproof bowls? You can still make this soup! After toasting the bread and rubbing with garlic, top each slice with cheese and pop under the broiler for the cheese to melt. Then, fill regular bowls with soup and top each one with a cheese bread. Make Ahead: The onion soup part of this recipe can be made up to 2 days ahead. Refrigerate in an airtight container until ready to use, then reheat before assembling the bowls. You can also make the garlic bread a day ahead and store it at room temperature. Freezing: The soup (without bread and cheese) can be frozen for up to 3 months. When ready to serve, defrost overnight in the fridge, then reheat and assemble the bowls .

posted by Olivia Mesquita on February 2, 2022