posted by Olivia Mesquita on September 13, 2014 3 comments »
Jump to Recipe
This post may contain affiliate links. Read our disclosure policy.
Jump to Recipe 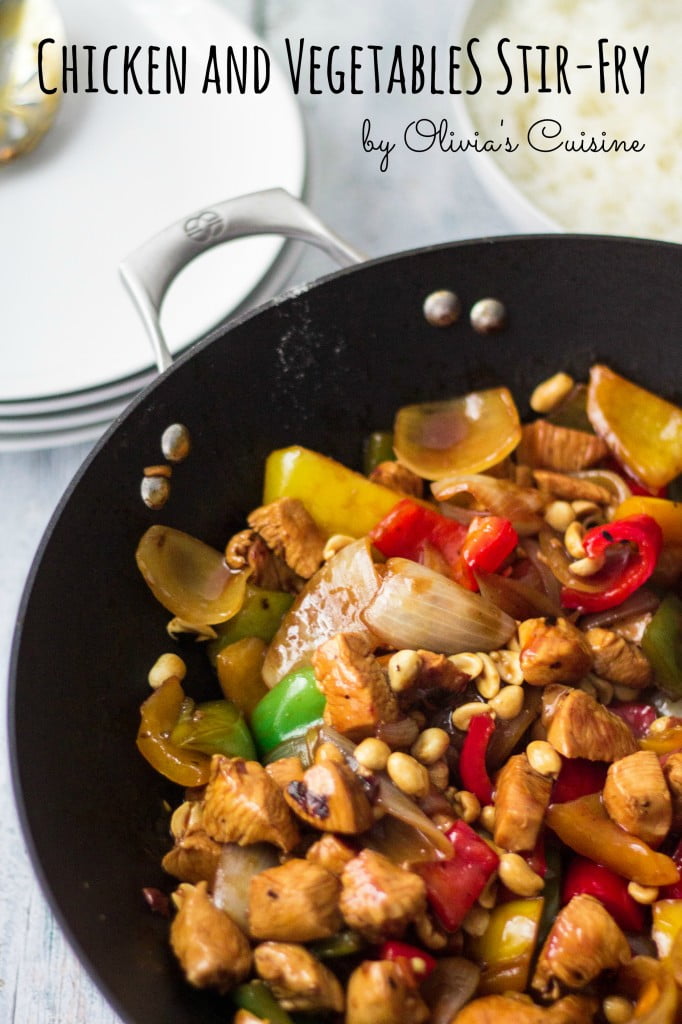 Can I share one more “Brazilianized” recipe with you guys? Pretty please? I promise you won’t regret it!

Anyways… This is a version of the Kung Pao Chicken, which is a typical Chinese spicy stir-fry dish made with chicken, vegetables, peanuts and chili peppers. It originated in the Sichuan Province of southwestern China and it’s believed to be named after Ding Baozhen, a late Qing Dynasty official and governor of the Sichuan Province. Gong Bao means “Palace Guardian” and so the name Kung Pao Chicken is derived from his title.

They say Ding Baozhen fell into a river when he was little. As he didn’t know how to swim, he would’ve drowned if a passing stranger hadn’t saved him. Ding grew up and became Gong Bao in the Sichuan Province. While there, he visited the home of the man that saved him, to pay his respects. The man served him this delicious meal with diced chicken, peanuts and Sichuan peppercorns. He liked it so much that he asked for the recipe and, from that day, he ate this dish often and always served it to his guests, making it very popular around the province. 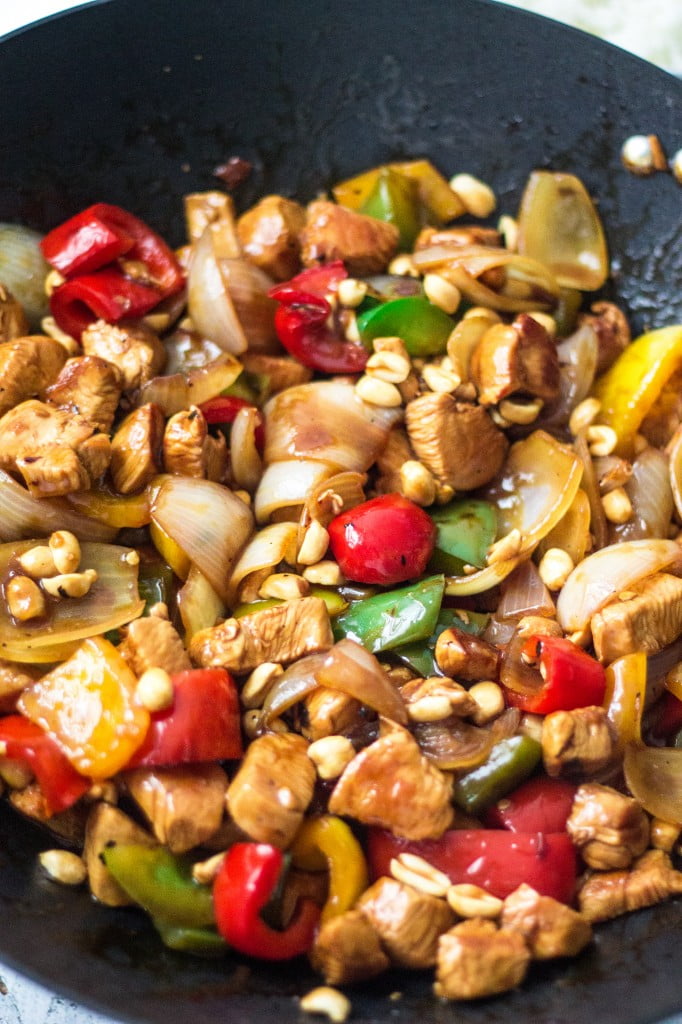 I love reading about the history of a dish. I always say that food is not merely for survival, it is also a way of expressing yourself and an important part of the culture of a nation. In my opinion, it’s a form of Art. Call me crazy, but I really do believe that. For example, did you have any type of food you couldn’t stand when you were little? I did! A lot, actually… I was a spoiled kid. Some of these foods I learned to like as I grew up. Or, as I like to see it, I acquired a taste for it! Either because I had better developed senses, was more qualified to make judgements or because I had more knowledge about things. Doesn’t that sound like Art?

I was really thinking I went cuckoo, so I researched online and read a few articles on the subject. One of them said that food was not Art because it doesn’t express emotion. I couldn’t disagree more. It expresses so much emotion. First there’s the emotions of whoever is cooking the dish – and a great example is my grandmother’s cooking that I can never recreate exactly because it has her “energy” – and then there’s the emotions the dish evokes in the person that is eating it. Food is so much emotion – hello?!? emotional eating?!? – that I cannot believe someone ever wrote the opposite. Oh, he also wrote that food doesn’t tell a story. Really? I just told you a story about the Kung Pao Chicken and I bet you will remember it every time you eat this dish. But, I’m totally digressing… I could write a whole book about how I think food is Art, but I would bore the hell out of you and you would never visit my blog again! And that would be sad, oh so sad! 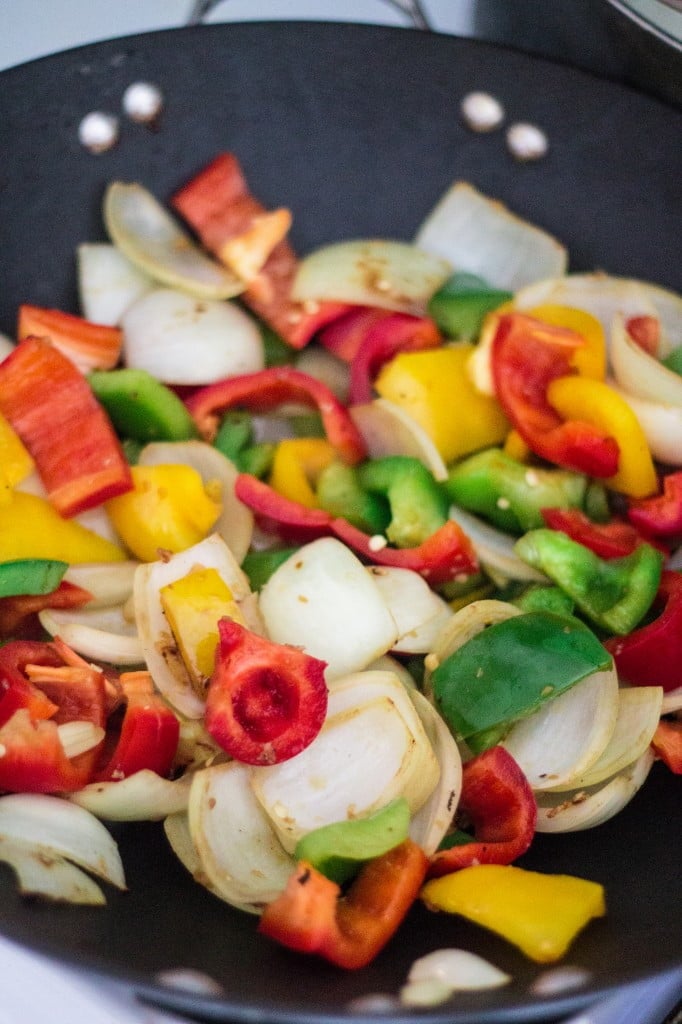 It is also interesting to observe how food evolves. Take the Kung Pao chicken, for example. You can probably order it in most countries in the world. And it’ll probably taste different each time. In Brazil we call the dish “Frango Xadrez”, which translates as “chess chicken”, and we use bell peppers instead of the chili peppers and we ditch the Sichuan peppercorns. Some people add other vegetables like broccoli, mushrooms, cabbage, bean sprouts. It all depends where you are in the country. Isn’t that amazing though? A dish that originated in China and ended up in Brazil, being made different in every state and every city. There’s no way you’re not impressed by that! :-)

I called my version Chicken and Vegetables Stir-Fry because I am not using the traditional Chinese recipe and I don’t wanna mislead people. Especially because the traditional one is usually super spicy and this version is not too spicy… It only has the sweet heat of the peppers. But it is so good! Seriously… I made some this week to post here and it’s all gone. And I’m already planning to make it again! It is like Asian comfort food, y’all!

Also, you have have have to serve this with rice. The chicken is so juicy and the sauce is so saucy (yes, I just wrote that… deal with it!) that it goes really well over rice. The rice soaks up the juices/sauce and it’s a-mah-zing! Also, it is so easy to make that is a perfect weeknight meal! And if you have a small family like me – just me and my husband – you will have plenty leftovers for 2 or 3 meals! And, I kid you not, you will be looking forward to all of them. Obsessing about that delicious chicken, and those salty/crunchy peanuts, and sweet onions and the sharp/sweet taste of the peppers… all in a pool of incredibly fabulous sauce!

Are you salivating like I am? I hope you are cause otherwise it is embarrassing that I’m salivating by myself.

P.S. So what is your opinion about food being a form of Art? I would love to know what other people think of the subject! :) 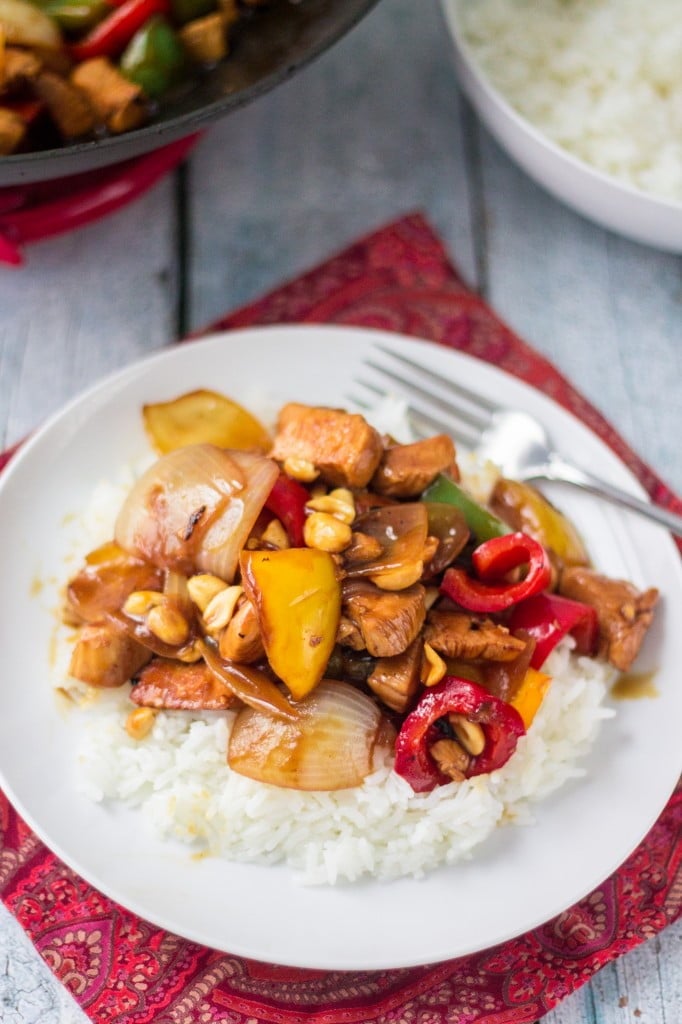