posted by Olivia Mesquita on June 4, 2019 2 comments »
Jump to Recipe
This post may contain affiliate links. Read our disclosure policy. 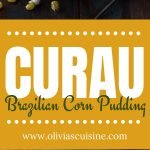 You haven’t lived a happy foodie life until you’ve tried a corn dessert. It is called “sweet corn” for a reason!

And since corn is a staple in Brazilian cuisine, you will find lots of desserts that use it as a main ingredient. We have curau, canjica, pamonha, flan, corn cake, corn ice cream and even corn juice!

Well, it is the beginning of fresh corn season here in the States, and I just snatched quite a few ears at a sale at Whole Foods, so this Curau recipe was meant to be.

If you are new to the world of corn desserts, this might taste a little exotic at first and take some getting used to. But, believe me, once you’re past that phase, it is comforting like a loving warm embrace!

Whether you eat it cold or warm is up to you. I confess I can never resist having a warm serving right before putting it in the fridge and then another once it’s cold and refreshing. It’s like two different desserts!

Curau de milho, also known as Canjica Nordestina or Jimbelê, is a sweet Brazilian dish made of corn, milk and sugar. It has a custard-like consistency, but without eggs.

It is often served at Festas Juninas, which are Brazilian winter festivals that happen in the months of June and July. You can read more about these festivities here.

Fun fact: a giant curau has been prepared every year since 1999 in the town of Caruaru (northeast Brazil) for those celebrations. The version served in 2008 was 35 meters long and used 4,500 ears of corn!

While this dessert is traditionally made with fresh corn, you can definitely make it used the canned variety.

Unripe fresh corn is preferable because we want all the starch that will be released from shaving the kernels from the cob. If using canned corn, you might want to add a tablespoon of cornstarch, or the curau might not thicken enough.

When buying fresh corn in the US, you will find that they come in three colors: yellow, white or bi-color. Despite popular opinion, there is no correlation between the color of corn and its sweetness, so either one will work to make curau.

However, if you’re after that bright yellow color that is characteristic of the dish, you will want to go for yellow!

How to Make Brazilian Corn Pudding

In the old days, curau was prepared by grating off the corn ears and then squeezing it in a cloth bag, gradually adding milk, to extract as much juice (and starch) as possible from the ground corn mass.

Nowadays, most recipes – including mine – will ask you to use a blender instead and then pass the mixture through a fine sieve.

That starchy liquid is then combined with sweet condensed milk, butter and a pinch of salt, and cooked until thick, creamy and utterly delicious!

As always, when cooking a large quantity of dairy, make sure to use a large enough pot and to stir often, as dairy can boil over and cascade all over your stove. Stirring allows the steam to escape and ensures that the milk is heating evenly.  Just remember to always exercise caution as steamy, sputtering milk can cause nasty burns!

The curau may be served warm, as porridge, or chilled, as pudding. It is typically dusted with powdered cinnamon.

Milk versus half and half for Curau

A few weeks ago, I was testing this recipe and – after having shaved the corn out of the cobs – found out that we were out of milk.

In a moment of desperation, I decided to use half and half instead. And I’m so thankful that I did! It was the richest and creamiest version thus far. I don’t think I’ll ever go back to the old ways!

Definitely not traditional, though. So feel free to use milk instead if that floats your boat!

How long will corn pudding last in the fridge?

Curau de Milho can be kept for up to 7 days in the fridge.

Unfortunately, curau does not freeze well. Even though freezing it won’t hurt you health-wise, the texture will change considerably and will end up grainy and unpleasant on the palate.

The fresh corn in this recipe can be substituted for canned corn, about 4 cans without the water. However, if using canned corn, you might want to add a tablespoon of corn starch (dissolved in milk) to aid with the thickening