posted by Olivia Mesquita on July 16, 2014 42 comments »
Jump to Recipe
This post may contain affiliate links. Read our disclosure policy.
Jump to Recipe 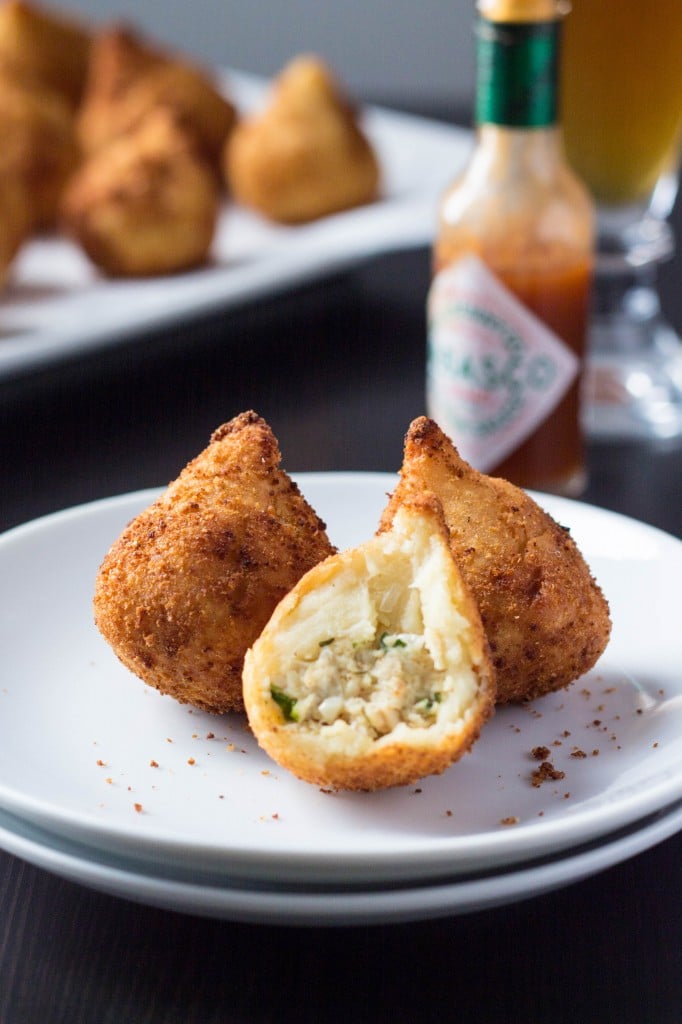 So here I am, after a 3 day pause (I have lots going on), to talk about my home country and one of its most popular dishes: the coxinha.You guys are going to hear lots about Brazil throughout my blog journey, since it is not only the country where I was raised and born, but also because it has amazing food!Talking about Brazil is very bittersweet to me, as I have a relationship of love and hate with the country. I love all the natural resources, the people (we are indeed warm and welcoming, as you may have heard!), the food, the language, the parties, the culture and above everything else, my family and my friends (that still live down there). But I hate where we are politically and economically today. I can’t stand the government that has been in power for 12 years now. I can’t stand the violence, the absurd taxes, the lack of a solid educational system, the lack of good public health care, the traffic, the corruption, and the list goes on and on! I also can’t stand the people that defend this government and all those things mentioned above. So I’m happy I don’t live there anymore. I’m happy I live in a country that welcomed me with open arms and gave me the opportunity to meet the man of my dreams! Where I can work hard and make a decent living without being afraid of 1) thieves and 2) the government taking all my money in taxes! But deep down I’m sad because I wish the country was in a better shape as it is one of the most beautiful countries in the world. 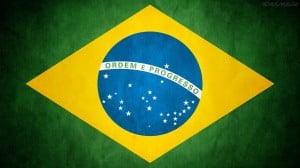 But enough with the buts.. This is a happy blog and we’ll talk about happy things! The internet and the news are already full of the sad and depressing stuff! :-)

If you don’t know Brazil, it is the biggest country in South America and the capital is Brasilia! I know, shocking! I bet you thought it was Rio! :-P Our currency is the Real and we speak Portuguese, not Brazilian! (Although the language sounds so different that it should be called Brazilian…) The core culture of Brazil is derived from the Portuguese culture, since we were colonized by the Portuguese, but it was also strongly influenced by African, indigenous and non-Portuguese European cultures and traditions. We were also influenced by Japanese, Jewish and Arab cultures. My Lebanese friend got really surprised when I told her we have Arab fast food in Brazil… There is even a chain, called Habbib’s, that has drive thru service! Also, in São Paulo, we have a Japanese neighborhood called Liberdade, that host the second biggest Japanese community in the world, the first being in Japan (obviously)!So, what else should I tell you about Brazil? Well, I’m sure you heard about Carnaval which is considered the most famous carnival festival in the world. It is celebrated differently in every State but we all celebrate it down there! Nobody works for a few days, which is awesome! And I’m sure you’ve seen pictures of the parades that we call Desfiles de Escola de Samba, with semi naked women, lots of partying, drinking and contagious music! Also, you may have heard that our national sport is soccer and that we are (or used to be) the best in the world, being the only country that has won the FIFA World Cup 5 times. (Italy comes next with 4 and now Germany has 4 too!)There’s a lot I could tell you about Brazil, but there will be plenty of opportunities for that! I mean, if you keep reading my blog… ;-) You will also see lots of brazilian dishes around here, such as feijoada (our national dish), brigadeiros (chocolate fudge balls), pão de queijo (cheese bread), empadinhas (little pies filled with hearts of palm), caipirinha (our national cocktail, made with cachaça which is Brazil’s native liquor) and many many more!So what is a coxinha? The coxinha (pronounced co-shee-nya) is a popular food in Brazil, consisting of a dough shaped in the form of a chicken leg and usually filled with shredded chicken and deep fried. It is usually served in parties, bars, street fairs and/or in coffee shops and bakeries and it comes in lots of different sizes, from cocktail sizes to large ones that can substitute a meal. They are great if accompanied by some beer! :-)Before we start the recipe, let’s put a bowl of water in the freezer. This is going to be used to help coat our coxinhas in breadcrumbs later, before frying. I find the almost freezing water works better than eggs, as my coxinhas come out super crispy and crunchy on the outside when I use the water, as when I use eggs they are not crunchy and they usually burn on the outside while not cooking on the inside.To make our coxinhas, let’s start by cooking the chicken and the potato in a pot with 8 cups of water and one cube of chicken bouillon. Wait for it to boil and then cover and cook until the potato and the chicken are fork-tender. Reserve 2.5 cups of the broth.Mash the potato and set it aside. 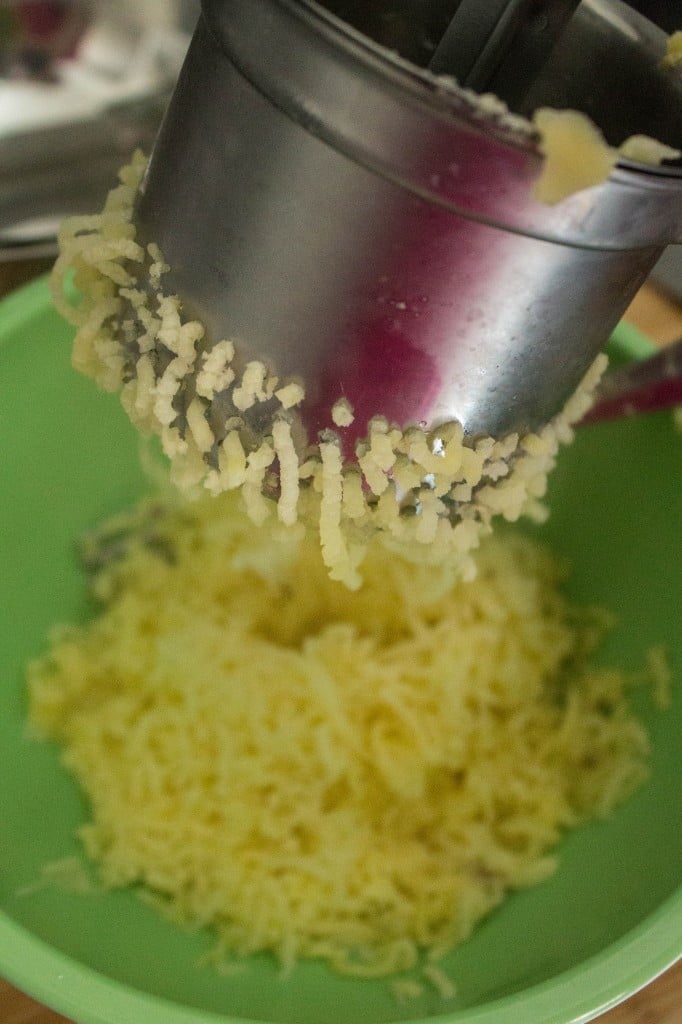 Since I’m going to use my food processor to shred the chicken, I start by chopping my onions in it, while the chicken and the potato are cooking. I usually chop the onions by hand, but I couldn’t resist making my life easier! By now, you guys know how crazy I am about my food processor. I have a Kitchen Aid 13 Cup Food Processor that I love and recommend. Also, Kitchen Aid gives 20% off all food processors for my readers! If you are interested, you can find it here! (Use code FP20 at checkout)

So after you chop the onions, reserve them and then shred the chicken in the processor. You can absolutely do it by hand, I just like the practicality of using a food processor! 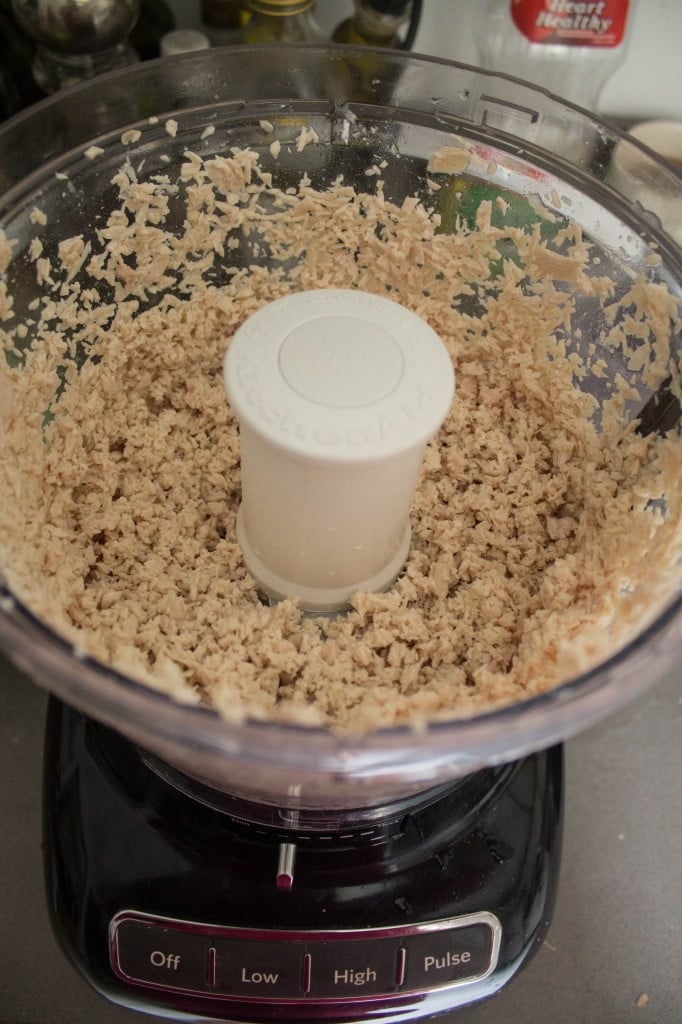 Now, let’s bring the broth back to the (empty) pot, with the mashed potatoes and the butter. Once it starts boiling, we add the flour slowly, stirring constantly until it forms a dough. Once the dough comes together and starts coming off the bottom of the pan, cook for a minute or two and turn the heat off. Although it is important that we work with the dough while it’s still warm, you can wait for it to cool a bit, so you won’t burn yourself. I usually put some olive oil on the counter and I poke the dough every now and then until it’s cool enough for me to handle it. Then I knead it just a bit until it’s silky and smooth. 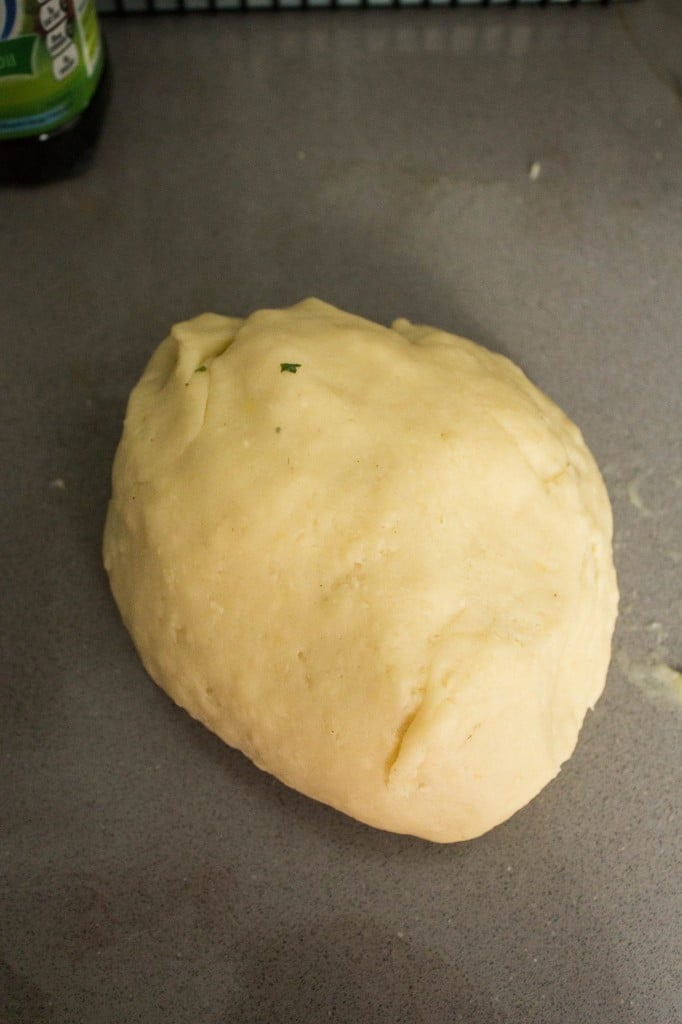 While you’re waiting for the dough to cool, you can start doing the filling. In a skillet, heat the olive oil and sauté the onions and the garlic until translucent. Add the chicken and sauté for a few minutes. Then add the poultry seasoning, the parsley and the salt and pepper (to taste). Give it a good mix and add the cream cheese. Cook, stirring constantly, until the cream cheese is melted and everything is incorporated. 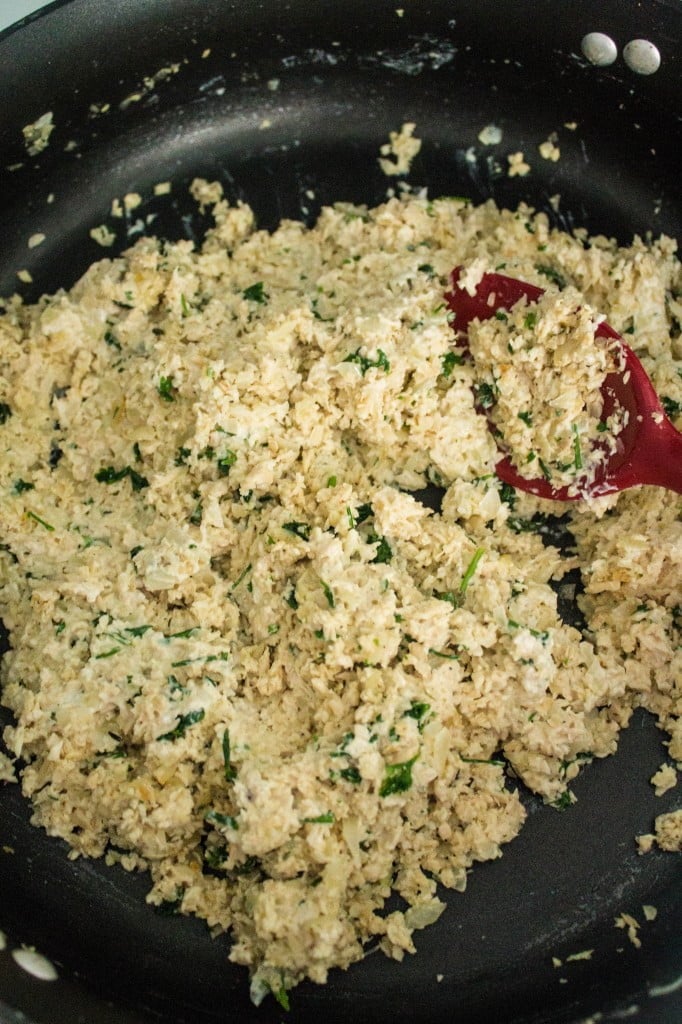 To form small coxinhas, we are going to get a little piece of the dough and form a ball the size of a ping pong ball. You can make them bigger if you so desire. 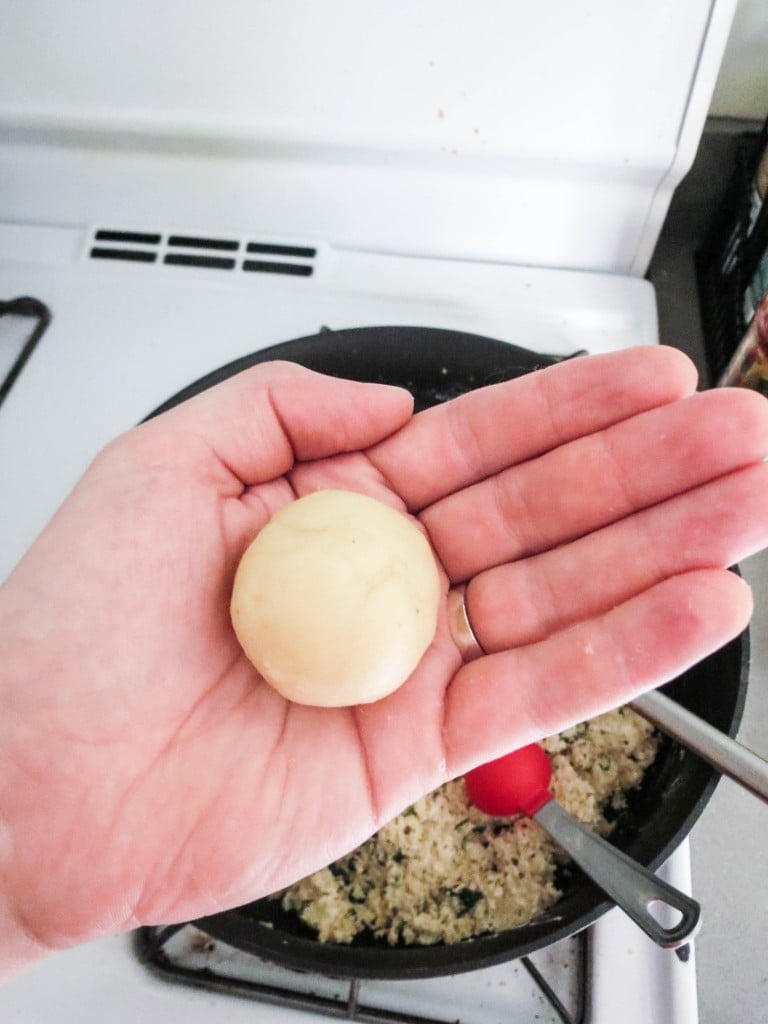 Then, flatten the ball, creating a disc and then hollowing out the middle for the filling. You should have something resembling a shell… (Or, as someone described it, an artichoke heart). I don’t like my coxinhas too dense, so I make sure I open my discs, making them kinda thin, but still sturdy so it won’t break once I put the filling. 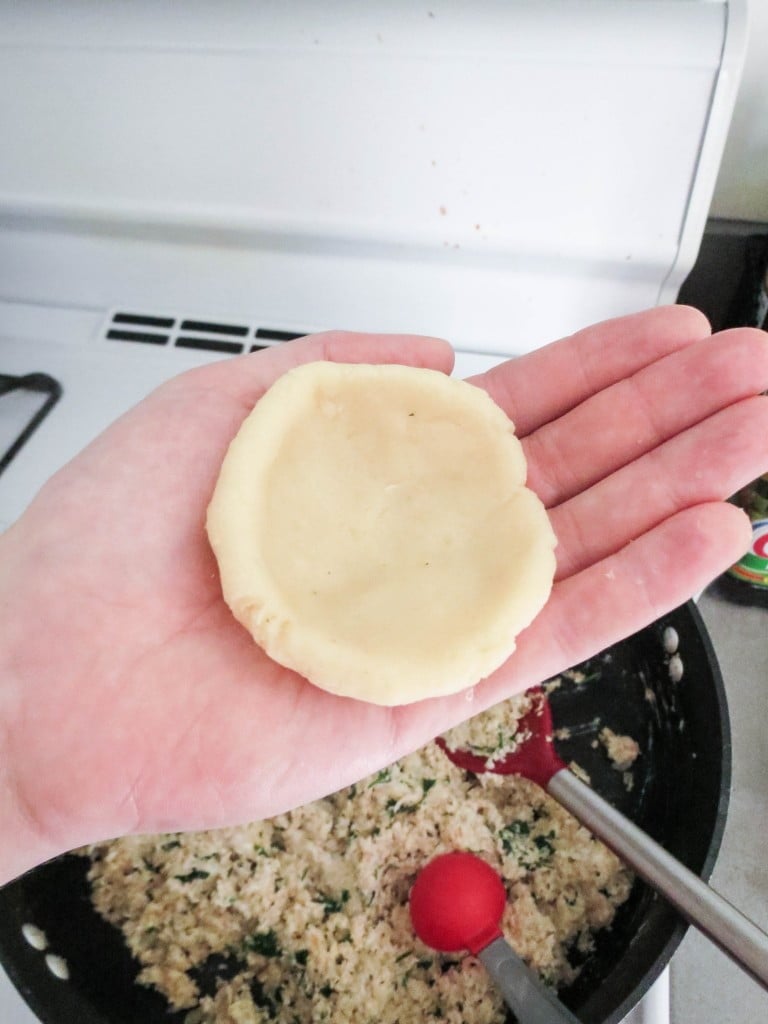 Spoon a tablespoon of the filling in the middle of your disc and then press the dough closed around the filling, shaping it as a teardrop. Proceed to make the rest of your coxinhas. This recipe makes approximately 30 small coxinhas, but you can make them any size you want! 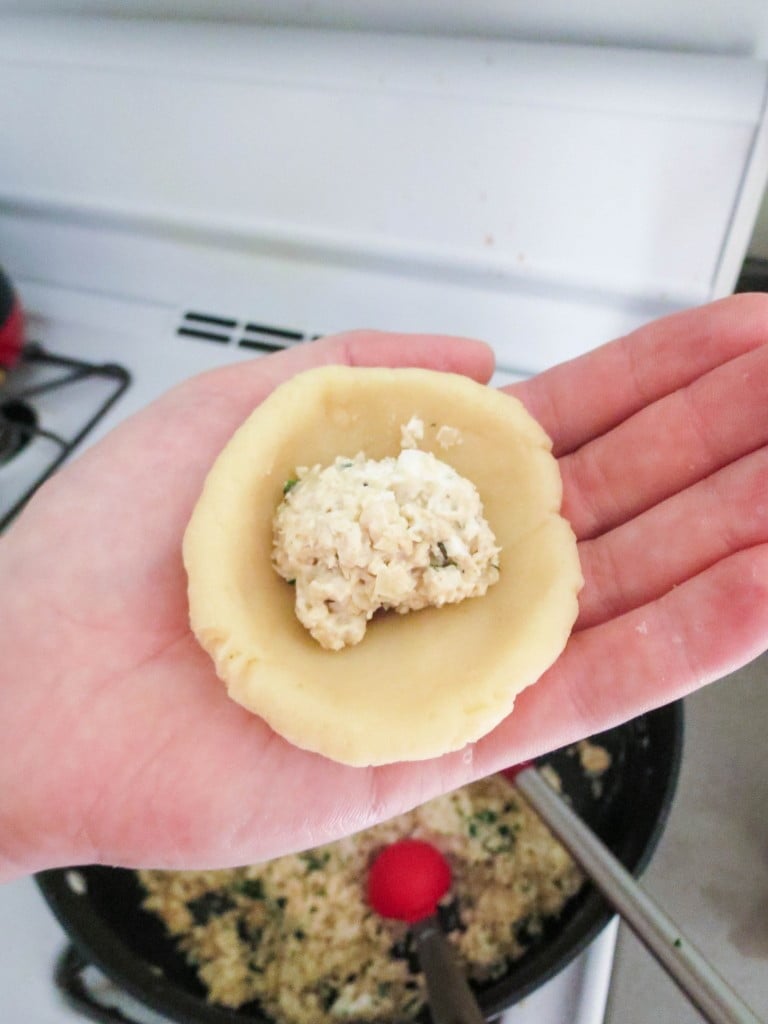 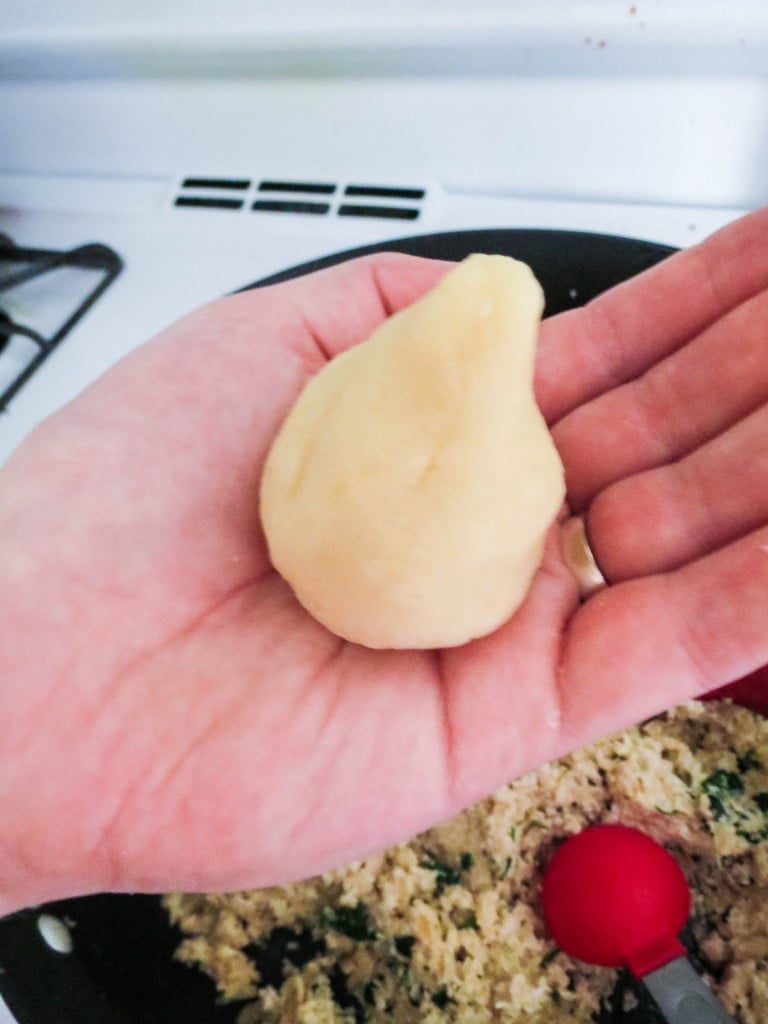 Take the water from the freezer and put some breadcrumbs in a separate bowl. Instead of dipping the coxinha in the water, just wet one of your hands with water and pass it all over the coxinha. Then dip it in the breadcrumbs to coat. Continue until all your coxinhas are coated in breadcrumbs. 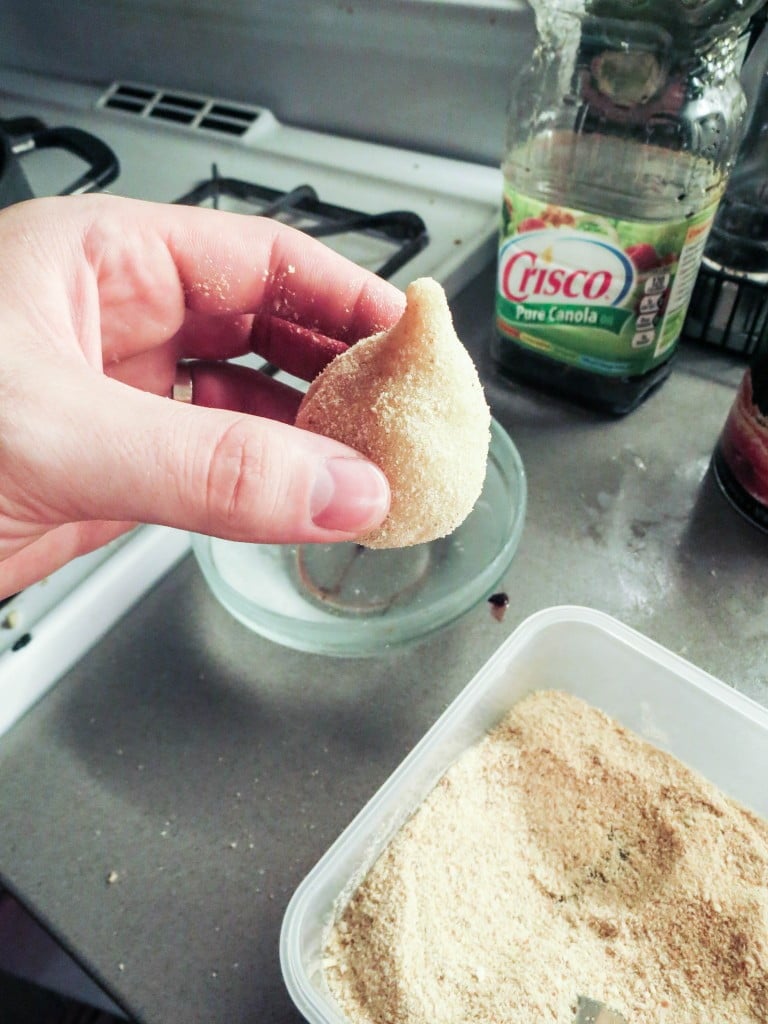 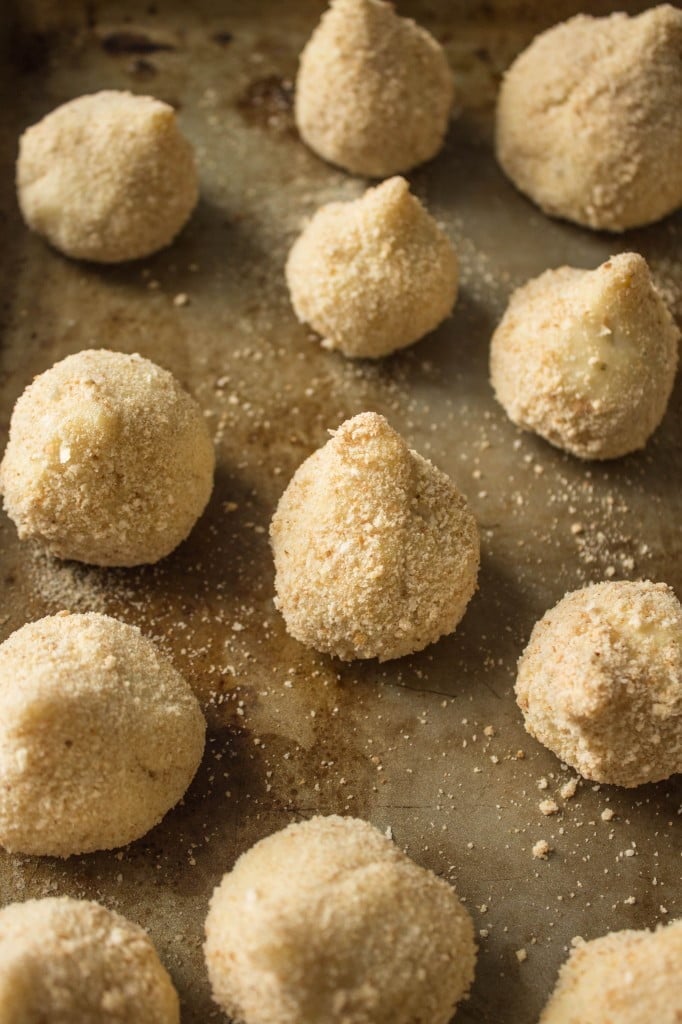 Heat enough oil to cover the coxinhas (so you don’t have to keep turning them) in a saucepan. You don’t wanna start frying your coxinhas before your oil is hot enough, as they would get soggy and oily. You also don’t want the oil to be too hot as they would burn on the outside. A good way of knowing if the oil is at the right temperature is adding a little ball of dough to the oil. When the dough rises, the oil is at the right temperature to start frying your coxinhas. You could also toss a match in the oil and wait for it to light up. When the match lights up, the oil is hot. 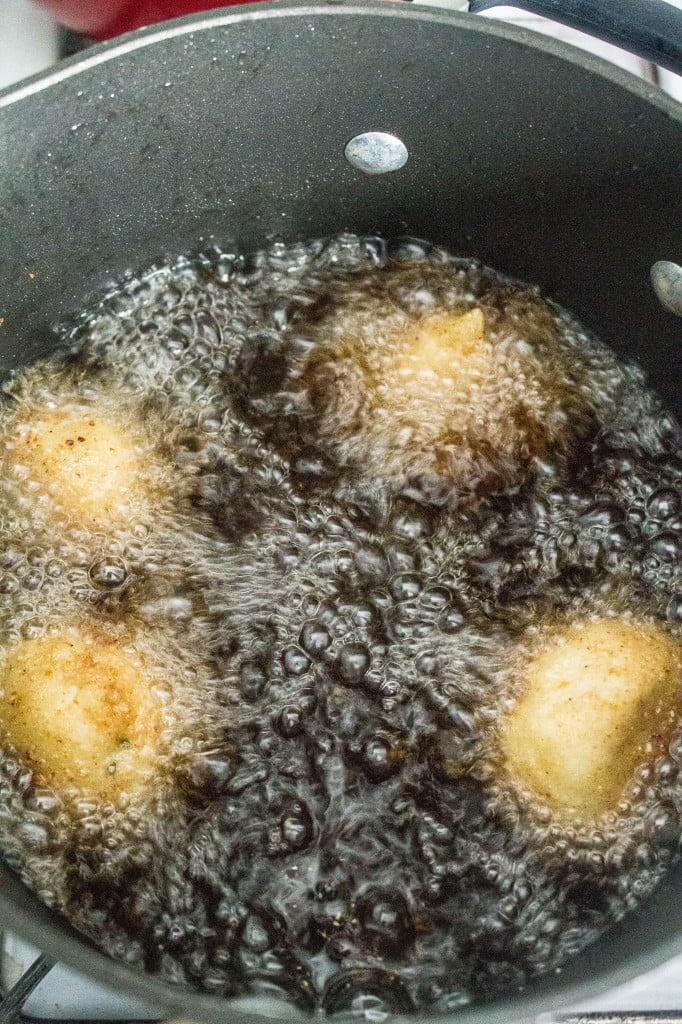 Fry the coxinhas, about 4 or 5 at a time, until they are golden. That can take anywhere from 2 to 5 minutes. Usually, the first batches will take longer and as the oil gets hotter, they will take less time.  Remove the fried coxinhas to a plate covered in paper towels.Enjoy your coxinhas with some hot sauce and some ice cold beer! YUM!P.S. You can also make the coxinhas ahead of time and freeze them. Just make sure you defrost them in the fridge before frying them. 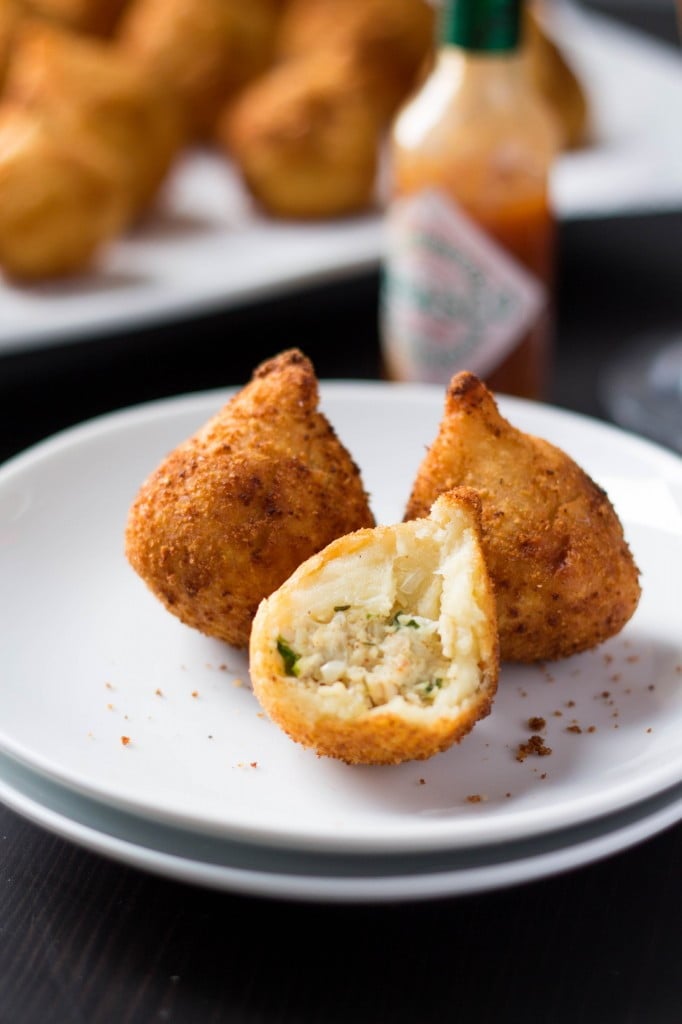 Disclosure: This post contains affiliate links, which means I receive a commission if you make a purchase using the link I posted.