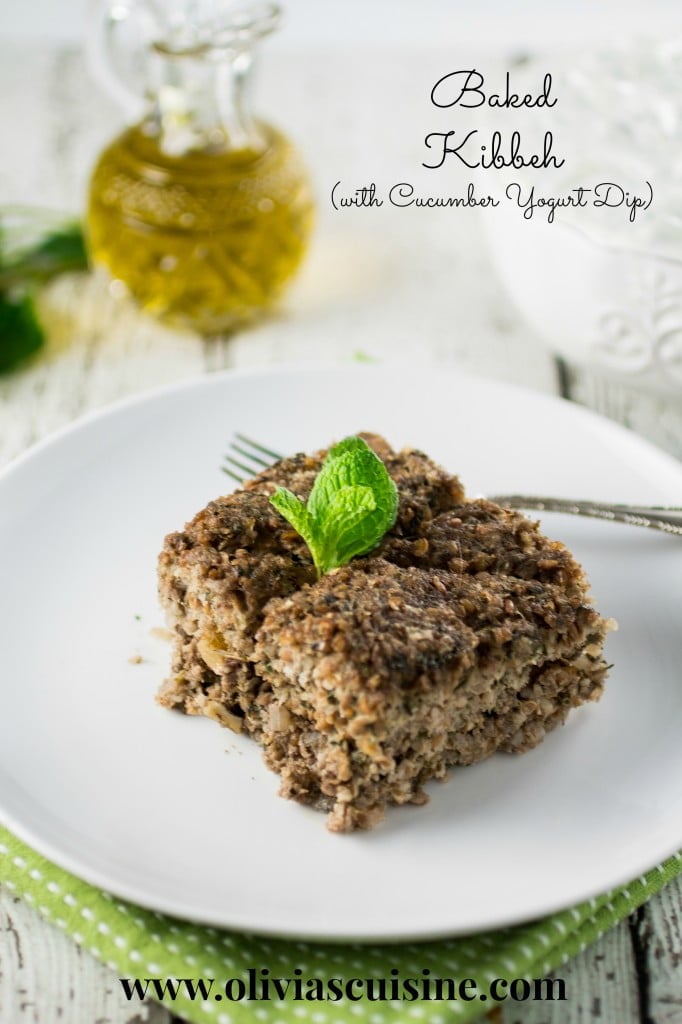 2014 is behind us and 2015 is here to bring us lots of happiness… And health, hopefully. Which brings me to an apology for being MIA for the past few weeks. I started having this excruciating pain down my right leg – that I later found out was sciatica – and visited the ER at least 3 times.. Oof! Yes, I’ve been having a rough time.
Also, one of these days where I spent 10 hours in the ER, we came home to find that Lola – our dog – ate a whole 9oz box of raisins, something that happens to be very toxic for dogs and can cause kidney failure. My lovely in-laws came to the rescue and took her at midnight to the Emergency Vet place where she ended up staying for 48 hours… And now we have to pay $2000! So, yes, I’m really glad that 2014 is over and am hoping for a better year this time. Unfortunately, because of all that, I haven’t dedicated enough time to Olivia’s Cuisine. I had so many holiday recipes and stories begging to make to the blog, but I guess they will have to wait to the end of this new year! :-(
But, what matters is that I’m back and that I’m already planning many delicious things for 2015! For example, this out-of-this-world delicious Baked Kibbeh. 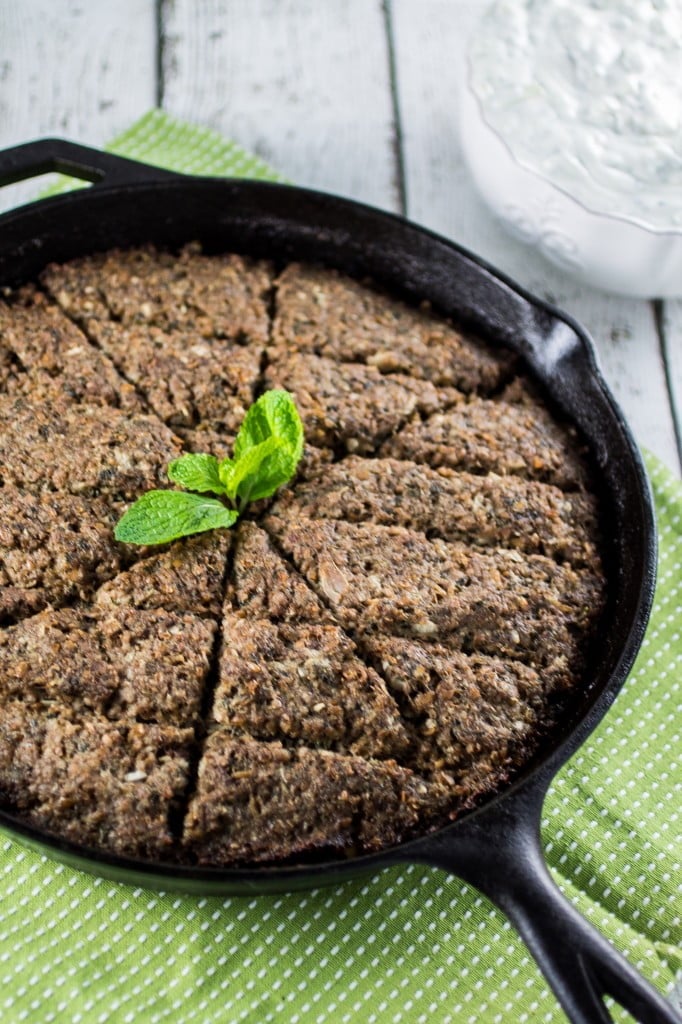 I think I told you this before, but Lebanese cuisine is really popular down in Brazil. So Kibbeh (or Quibe/Kibe in Portuguese) always makes the menu in our homes. I know it always did in mine! (My mom was even eating a slice of kibbeh when she was pregnant with me and her water broke and she had to run to the hospital. I know that because they always tell the story about how she dropped her arm with the kibbeh and our dog Apple started eating it! TMI?!? lol)

So yeah… Kibbeh is amazingly delicious and if you haven’t tried it yet, you absolutely have to!

Kibbeh, or Kibbe, is a Lebanese dish made of  burghul (cracked wheat), onions and ground beef (or lamb). It can be fried or baked. And it is considered to be the national dish of many Middle-Eastern countries. It is most often found in countries like Lebanon, Palestine, Jordan and Syria; but also Israel, Iraq, Iran Afghanistan, Egypt, Cyprus, Turkey, Argentina, Brazil, Colombia, Cuba, Ecuador, the Dominican Republic, Haiti, Honduras and Mexico. Moral of the story? Everybody loves kibbeh! :-) 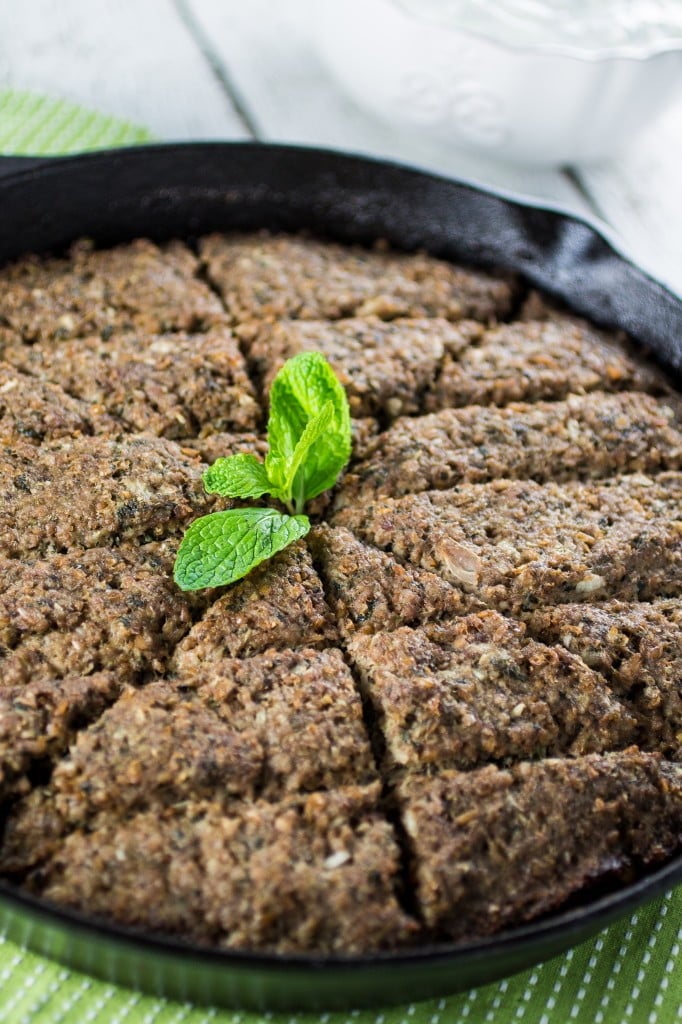 There are so many variations of this dish… As I said it can be fried (and then it is shaped like a Coxinha or even like croquettes) in different sizes, it can be baked and it can even be served raw. I know, I know! Salmonella alert! I always tell my dad that but he looooves his raw kibbeh with some olive oil and some pita bread! (I confess! I love it too! So far, so good…But you never know.). It can also be filled with many things, for example many different types of cheese or more meat.

The Kibbeh we used to eat growing up is just the meat “dough” without the filling. It is a very quick and easy dish and perfect for weeknights after busy days. It only requires ground beef, hydrated bulgur wheat, an onion, mint and some spices. The version I’m sharing with you has a meat filling in the middle that requires just a little bit more work but it makes it extra tasty! 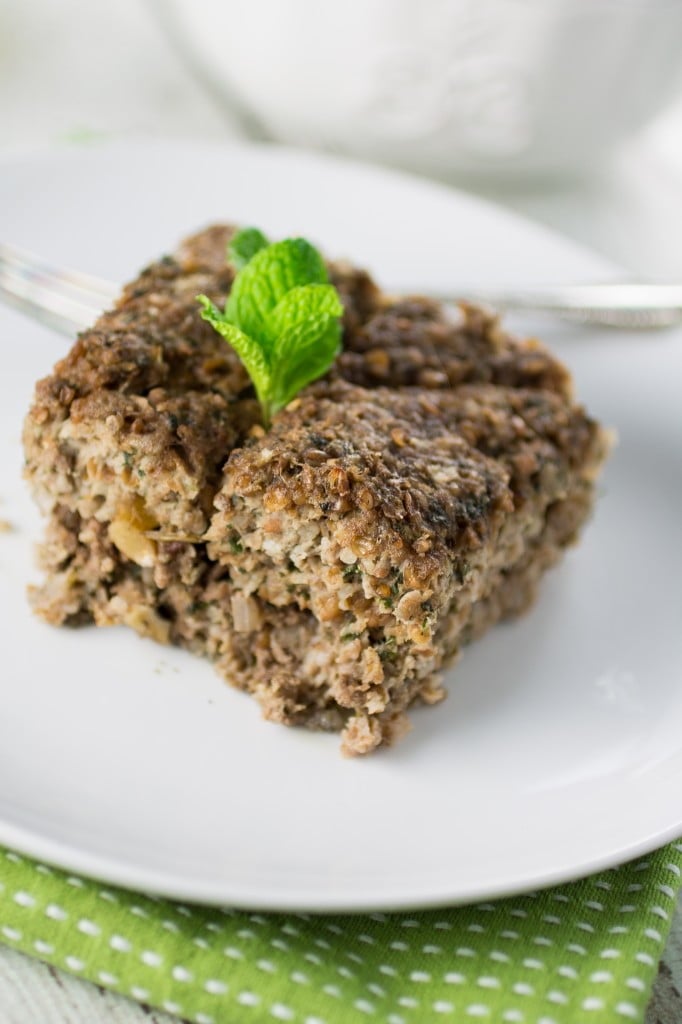 The mint is the biggest star of this recipe, in my opinion! It gives this meatloaf that special sweet/fresh flavor that Kibbeh lovers crave. The bulgur wheat comes in second, with its nut-like flavor, making this a very nutritious dish. Then, to make this a show-stopper, I like to add walnuts (or pine nuts) in the filling to give it an extra crunch and flavor. Seriously, guys, I’m salivating even though I know I can go to the fridge to grab a slice… It is that good!

I like to eat my kibbeh hot with white rice and salad, the Brazilian way. My Lebanese friend tells me she eats it with salad or with a Cucumber Yogurt dip. I decided to make the dip to try and loved it, so I’m sharing the recipe with you guys as well! in Brazil we have something called “Coalhada Seca” – that we often see in the Lebanese restaurants – which is pretty much the yogurt with lime juice and salt, but I love the addition of cucumber and (more) mint to this! 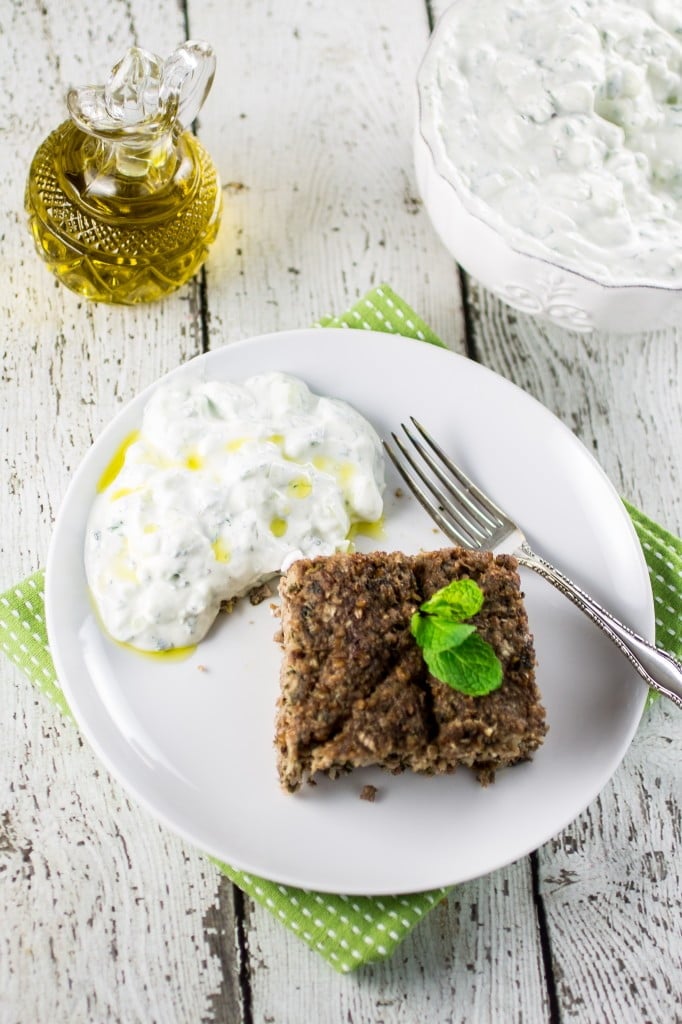 So this is it… my comeback recipe! I hope you guys enjoy it and that I stay healthy enough to post as often as I used to. In the meantime, we can all use a slice of this divine, moist, flavorful kibbeh! I’ve been through a whole lot lately, so I deserve to stuff my face with yummy food! :) 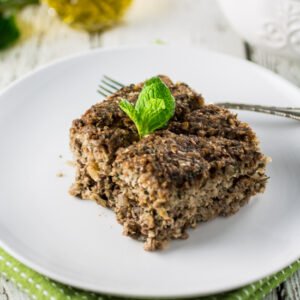 To make the filling: 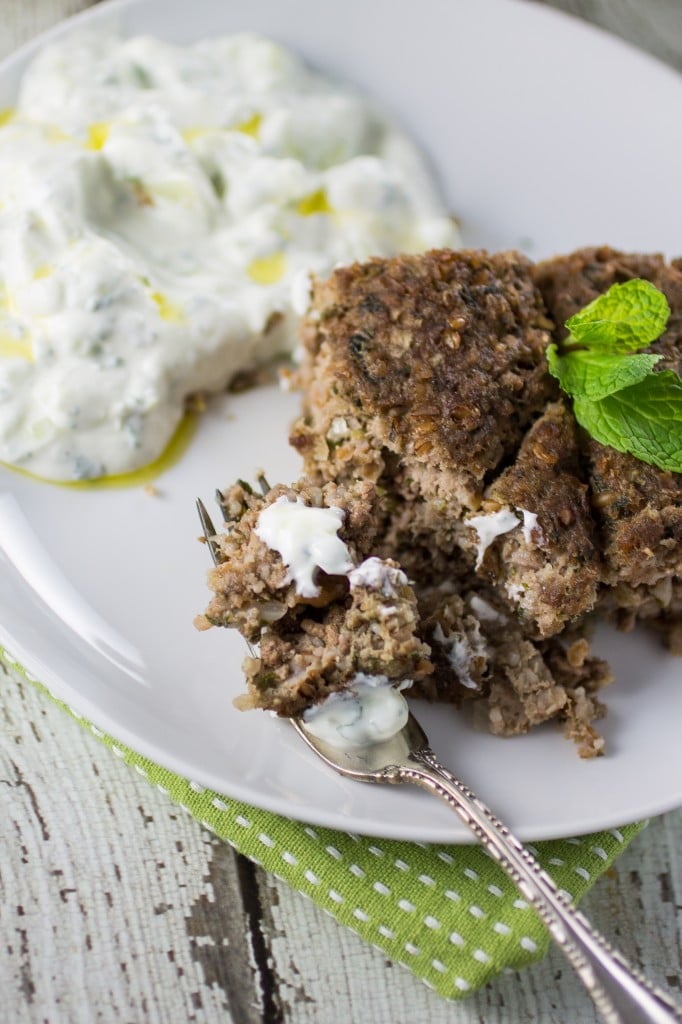