Black-Eyed Peas with Bacon and Sausage

posted by Olivia Mesquita on July 15, 2021 2 comments »
Jump to Recipe
This post may contain affiliate links. Read our disclosure policy. 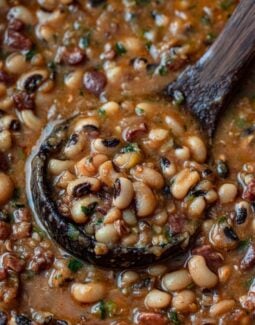 This black-eyed peas recipe is comfort food at its best! A soul food staple, black-eyed peas are cooked with bacon and sausage until perfect and creamy. Eat for New Year’s Eve if you want prosperity in the new year, or all year long if you are craving something delicious.

Serve these black-eyed peas with rice for a satisfying meal! It also goes great with my collard greens and a side of cornbread, turning them into a true Southern feast.

Black-eyed peas are more than good luck charms on New Year’s Eve, they are something I like to eat all year round!

And while they are very much associated with Southern cuisine, they are also popular in my home country, Brazil. Coincidentally, this black-eyed peas recipe resembles many I’ve seen shared in soul food blogs, just not spicy – as Brazilian cuisine is rarely spicy.

That leads me to (boldly) thinking it would be perfectly fine to serve them as part of both a Southern meal as well as a Brazilian one. And that shouldn’t come as a surprise, as both these cuisines have strong African roots and black-eyed peas come from Africa.

Whichever culture you choose to embrace, these delicious black-eyed peas are guaranteed to be a hit!

What are Black-Eyed Peas?

Despite the name, black-eyed peas (also known as cowpeas) are not peas but beans! Native to Africa, they are rich in iron, potassium, fiber and protein while also low in fat and sodium.

They are popular in several cuisines around the world, including Brazil, where they are called “feijão fradinho” and used to make the popular acarajé (black-eyed pea and shrimp fritters).

Here in the United States, they are a soul food staple in the South. In fact, Southerners believe that eating black-eyed peas on New Year’s Day will bring you prosperity in the new year.

There are two legends that try to explain the origins of this custom, both dating back to the Civil War.

The first one claims that when General William T. Sherman pillaged the Confederates’ food supplies, it left black-eyed peas and salted pork untouched, saying they were animal food and unfit for human consumptions. These supplies ended up helping Southerners survive the winter, so the black-eyed peas became a representation of good luck.

Another theory says that black-eyed peas were a symbol of emancipation for African-Americans, who were officially freed on New Years Day.

They taste like most beans: savory, starchy and a touch of nutty. They are also pretty earthy! When cooked, they have a dense, creamy consistency that is absolutely delicious.

To make this black-eyed peas recipe, you will need:

Optional: I like to add a tablespoon or two of tomato paste. Black-eyed peas don’t produce a dark broth like most beans, and I find that they look more appetizing if I add a bit of color with the tomato paste.

How to Cook Black-Eyed Peas

Cooking black-eyed peas is no different than cooking any other bean. Here I’m showing you how I cook them on the stove, but you can certainly adapt this recipe for the instant pot or slow cooker. I’ll share instructions down below!

I recommend using a Dutch Oven – because they retain and distribute heat evenly – but any heavy bottomed pot will do! Just make sure to keep an eye on your black-eyed peas while they cook, as pots and stoves vary and you might need to add some more liquid if the broth is evaporating too fast. There should always be liquid covering your beans as they cook.

Here’s how I make this black-eyed peas recipe. As always, you will find the printable (and more complete) version of the recipe at the end of this post!

Step 1: Brown the bacon and sausage.

To cook black-eyed peas in a pressure cooker, heat the oil on the sauté mode and then brown the bacon and sausage. Add the onions and garlic and sauté until softened. Stir in the soaked or unsoaked black-eyed peas, bay leaves, seasonings and broth. Make sure to not exceed the max fill line for your Instant Pot. Close the lid and cook at high pressure for 10 minutes and then let pressure release naturally. (Check for tenderness and cook longer if needed.) Turn the sauté mode again, smash 1/2 cup of peas and return them to the pressure cooker, letting the broth boil until it reaches the desired consistency. Discard bay leaves, stir in the parsley and scallions, adjust seasoning and serve!

To use a slow cooker to make this black-eyed peas recipe, follow the recipe as written to brown the bacon and sausage, and sauté the aromatics on the stove. Then, transfer everything to the slow cooker, and add the black-eyed peas, bay leaves, seasonings and broth. Cook on low for 6 to 8 hours (or high for 4 to 5 hours), or until the peas are tender. Smash 1/2 cup of the beans and return to the slow cooker. Cover and cook on high for about 30 minutes, or until the broth thickens to the desired consistency. Then, discard bay leaves, stir in the parsley and scallions, adjust seasoning and serve!

What to Serve with Black-Eyed Peas?

To me, a pot of hot black-eyed peas goes with white rice like Romeo goes with Juliet! 😂 And, together, they make a great side for chicken or beef.

In the South, they are often accompanied by greens (collard-greens, cabbage or mustard greens) and a side of cornbread or biscuits. And, if you are going the Southern way, don’t forget the hot chili sauce or pepper-flavored vinegar!

There are many variations to this black eyed peas recipe.

Do black-eyed peas need to be soaked?

No. Soaking them will cut on cooking time, but it is not necessary.

Can I make this black-eyed peas recipe ahead of time?

Yes! This dish can be prepared up to 2 days ahead and reheated on the stove when ready to serve.

How long will they keep in the fridge? Can I freeze them?

Leftovers will keep in the fridge for 3-4 days. You can also freeze them, in an airtight container, for up to 4 months. 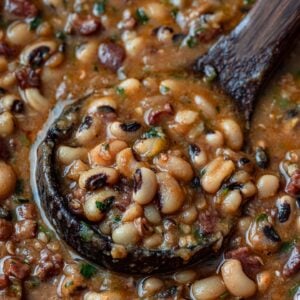 Servings: 6
Prep Time: 10 mins
Cook Time: 1 hr 50 mins
author: Olivia Mesquita
course: Side Dish
cuisine: American, Brazilian
This black-eyed peas recipe is comfort food at its best! A soul food staple, black-eyed peas are cooked with bacon and sausage until perfect and creamy. Eat for New Year’s Eve if you want prosperity in the new year, or all year long if you are craving something delicious.
5 from 1 vote
Print Recipe Pin Recipe Rate Recipe

To soak or not to soak? Soaking the black-eyed peas will help them cook faster. But peas that have not been soaked will also cook, so don’t worry if you don’t have time to do it! Instant Pot and Slow Cooker Methods Read the blog post to learn how to make this black-eyed peas recipe in the Instant Pot or slow cooker. Storage and Freezing Leftovers will keep for up to 4 days in the fridge. If you wish to keep them longer, you can freeze them in an airtight container for up to 4 months. Reheating Black-Eyed Peas Reheat on the stove, in saucepan (with a splash of water or broth) over medium-low heat.