posted by Olivia Mesquita on April 15, 2015 43 comments »
Jump to Recipe
This post may contain affiliate links. Read our disclosure policy.
Jump to Recipe 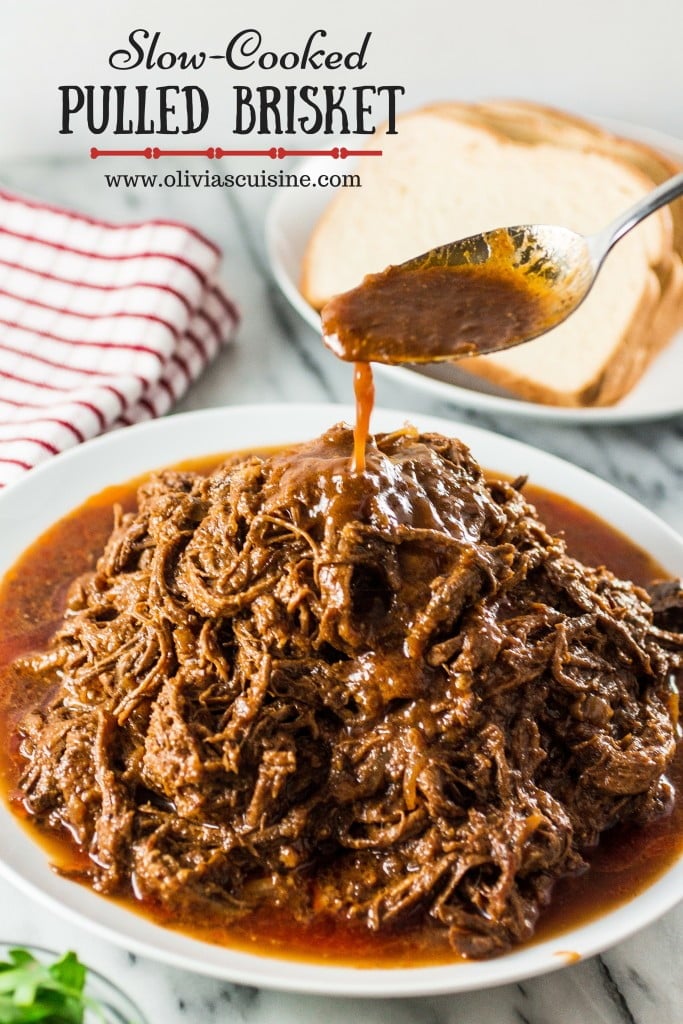 Yes, this has been a very meaty week at the blog, first with the Skirt Steak Fajitas and now with this scrumptious Slow-Cooked Pulled Brisket that will rock your world!

Seriously, who can resist this southern classic? It’s comfort food at its best, in the form of meat that melts in your mouth! I’m telling you, it can’t get any better than that. Especially because it is made in the slow cooker, so it’s extremely convenient and the only thing you will have to do is brown the meat and sauté the onions and garlic before adding them to your crockpot.

The hard part? Waiting 10 hours to eat this while your home smells fantastic. It’s sweet sweeeeeet torture! (Please be aware of husbands that try to open the crockpot’s lid. I wish they would make a model where the lid shocks you if you try to open it when you’re not supposed to!)

I sincerely apologize if you’re vegetarian/vegan! I promise I have some delicious non-meat recipes on the work for you. But for now, let me focus on my carnivore friends! 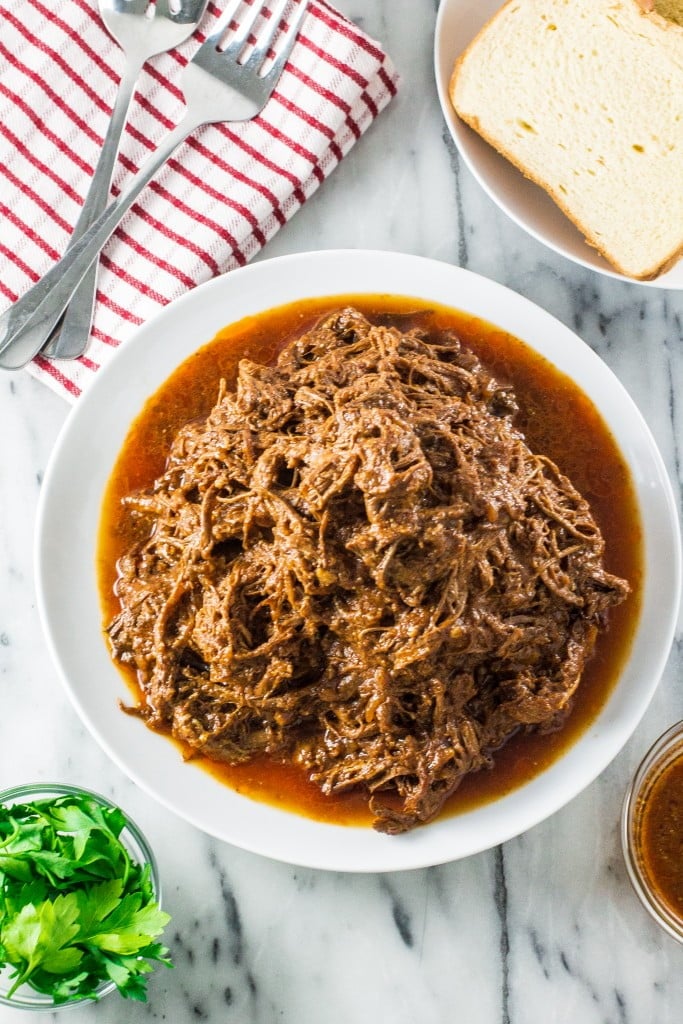 The truth is… I’m sharing this recipe with you today because I have an even better (whaaaat?!? What can be better than this?) recipe coming later this week, that will need this pulled beef as an ingredient. So I decided to share this Slow-Cooked Pulled Beef first because you will need to use the slow cooker, even though we run the risk of you eating it all even before I share the second recipe.

My husband went crazy over this. He was eating it by the spoonful until I gave him some buns to make sandwiches. He wasn’t too happy I told him he could only eat a little cause I needed most of it for another project. (Until he tasted the other project and understood that sometimes, in life, you just have to wait…) 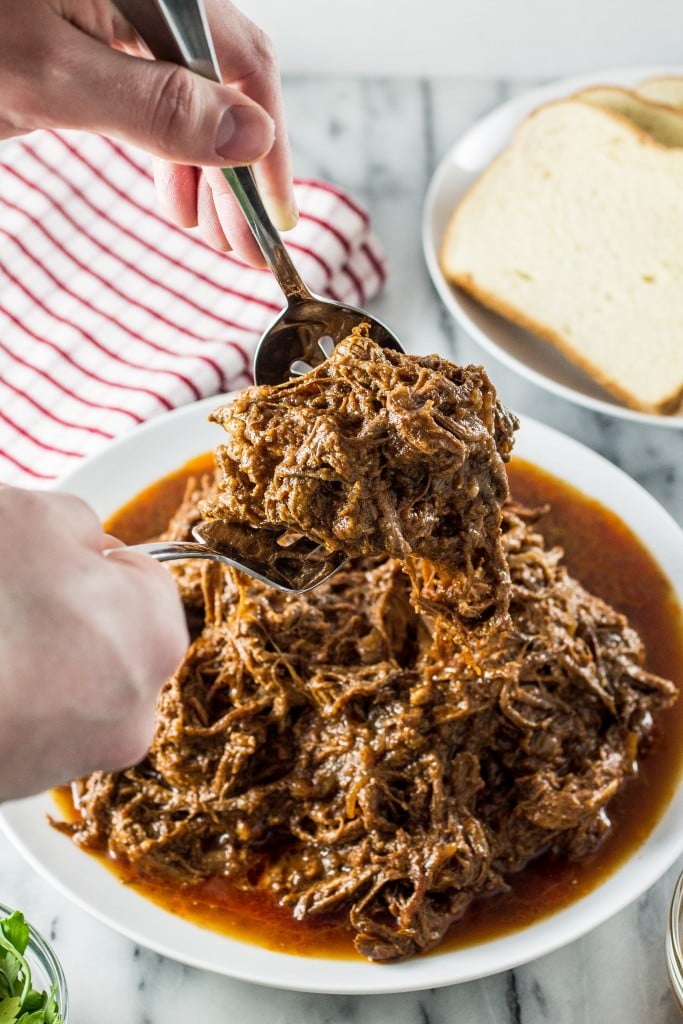 I need to confess something: until I tried pulled brisket, I hated brisket! The one I tried before was dry and super fatty, definitely not my type of beef. However, when brisket is slow cooked for a long period of time, the connective tissue’s fibers are broken down and the meat will fall apart at the touch of a fork.

To prevent the meat from drying out during the cooking process, just keep the fat. I know, it’s gross! I have this horror-movie like aversion to big layers of fat, but I braved through it and left the fat in. At the end, once the brisket was cooked, I cut it out easily with a serrated knife and discarded the fat (against my husband plead to let him eat it!).

You can tots (that’s ‘cool speaking’ for totally!) leave the fat in if it doesn’t bother you. I know of a few family members – ahem, dad… – that loves a good slab of pure fat. Nowadays he tries to eat it fast so I don’t see it, cause he knows I’ll forbid him! 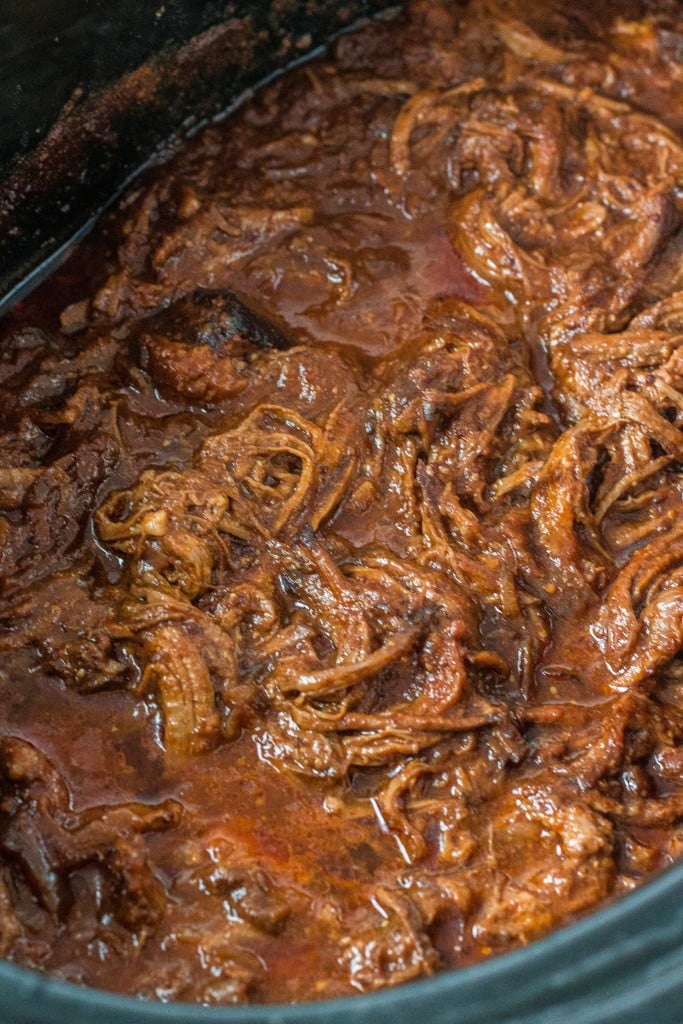 Doesn’t it look out of this world?

And the flavor… oh, the flavor! The brisket soaks up all the flavors from the homemade BBQ sauce it’s cooked in. I guarantee you will be licking your fingers!

This is perfect for weeknight meals or if you need a recipe to feed a crowd! You can serve on burger buns, on mashed potatoes, polenta, baked potatoes or you can wait ’til Friday for an amazing new recipe!

P.S. Wanna keep in touch? Follow me on Facebook, Twitter, Instagram or Pinterest to stay up to date with my posts! If you end up making one of my recipes, I would love to see it! Just take a photo and post it on your preferred Social Media and tag me or use the hashtag #oliviascuisine! :)

If you don't have a slow cooker, just braise your brisket in a dutch oven in the oven (300F degrees) for 3 to 4 hours! 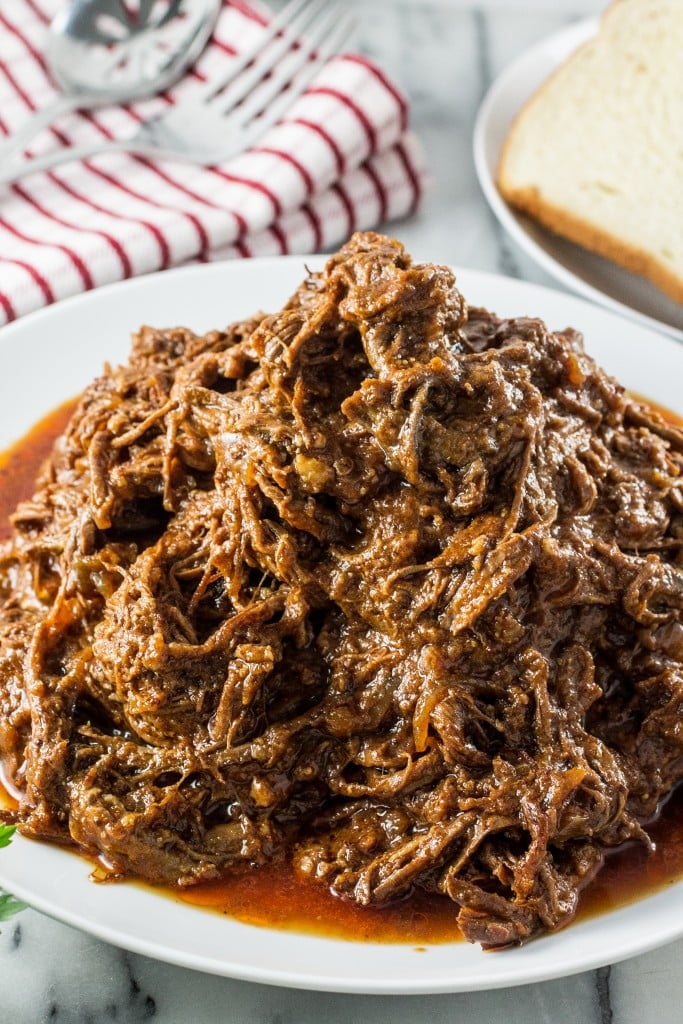 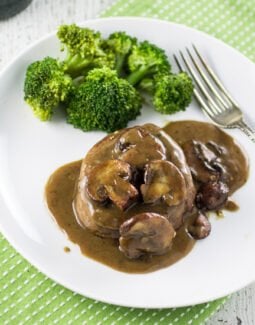