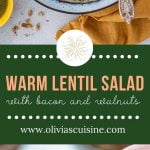 This Warm Lentil Salad with Bacon and Walnuts is a must-make if you wanna ring the new year with good luck. Not into superstitions? Make it anyway! Because who could resist something so delicious?

Looking for more party food? Make sure to also grab the recipes for our Hot Smoked Gouda Bacon Dip, Prosciutto Puff Pastry Tart and our tutorial for a Build Your Own Bruschetta Bar.

I was never one to pay too much attention to New Year’s rituals, and we Brazilians have a lot of them.

The main one is wearing white for New Year’s Eve. Everybody – except the rebels (including yours truly) – wears white, as a symbol of peace and harmony. That tradition comes from an Afro-Brazilian religion called Candomblé, where the color white is worn to represent spiritual purification.

Also from Candomblé comes the traditions to jump the 7 waves and to throw roses in the ocean, as an offer to Iemanjá, the goddess of waters and queen of the seas.

You would think that only people who practice that religion do those things, but, no, everybody does it! Even my very Catholic grandmother, who kneels every night to pray.

That’s how big of a part of our culture these rituals are. And, I don’t know about you, but I find that something that brings together people from all sorts of different believes, beautiful and worth celebrating.

So, yeah, I’ll wear white on December 31st, even if it makes me look pale and fat. I’ll get in the ocean at midnight to jump the seven waves even though I’m very scared of crabs and other ocean creatures.

Legend has it that lentils bring money and abundance because of its round and flat shape, resembling a coin.

Brazilians believe that you have to eat at least 12 lentils to ensure that your new year will be prosperous and plentiful!

This superstition is similar to one practiced in the Philippines, except they eat round fruits (like grapes) instead. We also do the grape one, but they have to have seeds and you have to keep the seeds in your wallet and purse during the new year.

To make the best warm lentil salad, you will need:

Which kind of lentils should I use?

The best kind of lentils to make lentil salad are French lentils.

They are a variety of green lentils, but slightly darker in color and smaller in size. The reason they work great for salads is because they hold their shape really well, better than all the other types of lentils.

Since we don’t want a mushy salad, you should try to get your hands on them, if you can find them at your grocery store. If you haven’t tried them, you are in for a treat, as their flavor is nuttier and more peppery when compared to the other varieties.

That being said, the next best option would be regular green lentils. You can find them at every store and they will work just fine for this salad. Just make sure you don’t overcook them!

How to make Warm Lentil Salad

I know that most of you will want to make this recipe easier and use canned lentils instead of cooking them from scratch.

Can you do that? Yes. Should you do that? Absolutely not. They are so quick and easy to cook, that there’s no reason why you should skip on all the flavor and texture you can only get from cooking them yourself.

A few tips to ensure your lentils are perfectly cooked:

Here’s how to prepare this salad. As always, you will find the printable (and more complete) recipe at the end of this post!

How to serve warm lentil salad

I love serving this salad as an appetizer, along some crostini, at parties.

It also makes a great side dish or a light lunch, perhaps served on a bed of wild arugula.

And while I do prefer to eat it warm, you can absolutely serve it at room temperature or even cold!

How long can I keep this salad in the fridge?

If stored in an airtight container, this lentil salad will keep for up to 5 days in the refrigerator.

If you are making it ahead, to serve at a later date, I would skip the dressing for when you plan on serving it. Then you can reheat – being careful so they don’t become mushy – and toss with the dressing before enjoying it.

Leftovers should be eaten cold or at room temperature, as I don’t recommend reheating it after the salad has been tossed with the vinaigrette.

Can I Freeze Lentil Salad?

While you can certainly cook and freeze lentils, I wouldn’t freeze the salad after tossing with the vinaigrette as the lentils might get soggy when thawed. 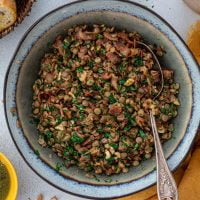 Servings: 6
Prep Time: 5 mins
Cook Time: 25 mins
Total Time: 30 mins
author: Olivia Mesquita
course: Salad
cuisine: French
This Warm Lentil Salad with Bacon and Walnuts is a must-make if you wanna ring the new year with good luck. Not into superstitions? Make it anyway! Because who could resist something so delicious?
No ratings yet
Print Recipe Pin Recipe Rate Recipe

For the Dijon vinaigrette:

You may cook lentils up to four days ahead and store in the refrigerator. Gently heat, adding some extra broth if needed, being careful so they don’t get mushy. Proceed with the rest of the recipe. You can also make the whole thing ahead but skip the dressing. Reheat the salad the day you plan on serving it and toss with the vinaigrette.

Leftovers can be stored in the fridge for up to five days. Eat cold or at room temperature.