posted by Olivia Mesquita on July 10, 2020 2 comments »
Jump to Recipe
This post may contain affiliate links. Read our disclosure policy. 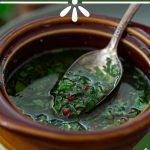 Argentinian Chimichurri is zesty, herby and garlicky, making it the perfect sauce to serve with grilled meat! A staple of South American cuisine, this recipe is easy to make and ready in less than 5 minutes.

If you love South American food, make sure to also check out my Beef Empanadas, Chacarero Sandwich and – of course – all my Brazilian recipes!

A vibrant and fresh sauce for grilled meat!

Move over BBQ sauce, it is chimichurri’s turn to shine!

Possibly my favorite side kick for churrasco, this sauce has the power to transform anything you drizzle it on.

I may be guilty of dunking some crusty bread on it while I wait for the meat to be ready! Shhh, don’t tell anyone. In my defense, I make extra to account for that!

And since this condiment lasts so long in the fridge, you can make a big batch and use it whenever you need a little boost of flavor in your recipes.

Plus, a printable recipe!

Chimichurri (pronounced chee-mee-choo-ree) is an uncooked sauce, made of herbs (usually parsley and oregano), garlic, oil and vinegar. Very popular in Argentina, Uruguay, Paraguay and in Southern Brazil.

Down in South America, you will find both a green (chimichurri verde) and a red (chimichurri rojo) version. Today we are focusing on green chimichurri.

Where is Chimichurri from?

While most people associate Chimichurri with the country of Argentina, it is also claimed to have originated in Uruguay.

My brief research on that subject led me nowhere. You can find the sauce in both cuisines, but it’s impossible to know who came up with it first!

Having visited both countries, I don’t recall seeing chimichurri in Uruguay as much as I saw it in Argentina. But since I don’t want to create any friction with my hermanos, I will abstain to voice my guesses! 😉

What does the word “chimichurri” mean?

This is another mystery, as there is no evidence on the origins of this word.

However, being the food nerd that I am, I did find some interesting theories!

One of them says that when the British failed to invade the Spanish colonies in Rio de la Plata in the beginning of the 19th century and were taken prisoners, they would request condiments with their food by saying “Tche! mi curry“.

Another popular version – also without any historical evidence – claims that the name came from an Englishman who joined the fight for Argentine Independence and that was called James McCurry.

He used to try replicating Worcestershire sauce with local ingredients, and ended up coming up with a mixture similar to what is now chimichurri. Since his name was difficult for Argentines to pronounce, it ended up morphing into chimichurri (“Jimmy’s Curry”).

The theory I find the most plausible says that the name drifts from a Basque word: “Tximitxurri“, that mean “mixture”. In fact, there is a sauce with that name in Basque cuisine, made with similar ingredients, hence why I think this is the most credible version!

While I prefer to use fresh herbs, you can definitely use dried herbs instead.

In fact, since chimichurri became popular due to gauchos using it to flavor meat cooked over open fires, chances are that it was traditionally made with dried herbs, as fresh herbs would spoil.

However, if using dried herbs, I recommend adding about 1/4 cup of warm water to the sauce to hydrate them.

Traditionally, Argentinian chimichurri is made with sunflower seed oil.

Most recipes you will find online ask for olive oil, but olive oil was not widely available in Argentina and Uruguay back in the days, so those versions are not authentic.

That being said, I do make my chimichurri with olive oil quite often, as I like the extra oomph of flavors that it gives the sauce. Some people prefer to stick with sunflower oil (or another mild oil), claiming that olive oil outshines the flavors of the other ingredients.

I would try making it with both oils and then decide which one you like best!

How to make Chimichurri

Argentinian Chimichurri is a very simple sauce! You do not need any special equipments other than a knife, a cutting board, a bowl and a spoon.

Some recipes will suggest you use a food processor, but I find that you risk pureeing the herbs and chimichurri should never be like a pesto! So use this opportunity to work on those knife skills!

Here’s how I make this Argentinian Chimichurri recipe. As always, you will find the printable (and more complete) version of the recipe at the end of this post!

Chimichurri is often served as a side sauce to asados (grilled meats). It goes exceptionally well with flank or skirt steak, as well as poultry, sausages and fish.

It can also be used as a marinade or as a basting sauce to spoon onto the meat as it cooks.

Other fun (yet not traditional) ideas:

Can I make it ahead?

Yes, in fact it is recommended as the flavors improve as they have time to meld together. You should serve it within 2 days for best results!

Bring it to room temperature before serving.

How long will chimichurri last in the fridge?

While it is best served within 48 hours, chimichurri will last up to 3 weeks in the fridge.

Yes, you can freeze it for up to 1 month. The herbs might not look as fresh when you thaw the sauce, but it will still be delicious and safe to eat.

You can freeze it in individual cubes, using an ice cube tray. Once frozen, I like to transfer them to a freezer bag. 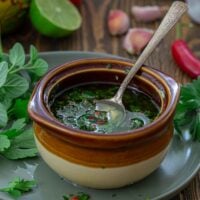 Make ahead and storing:

Chimichurri sauce can be made ahead and refrigerated for up to 3 weeks. However, it is best served within 24-48 hours for freshness.

Freeze chimichurri sauce in individual cubes using an ice tray. Once solid frozen, you can transfer to a freezer bag. Thaw and bring to room temperature before using.

If you like this Argentinian Chimichurri Sauce, you will also love: