Home > Holidays and Seasons > Back to School > Easy Chicken Quesadilla

posted by Olivia Mesquita on May 2, 2015 12 comments »
Jump to Recipe
This post may contain affiliate links. Read our disclosure policy.
Jump to Recipe 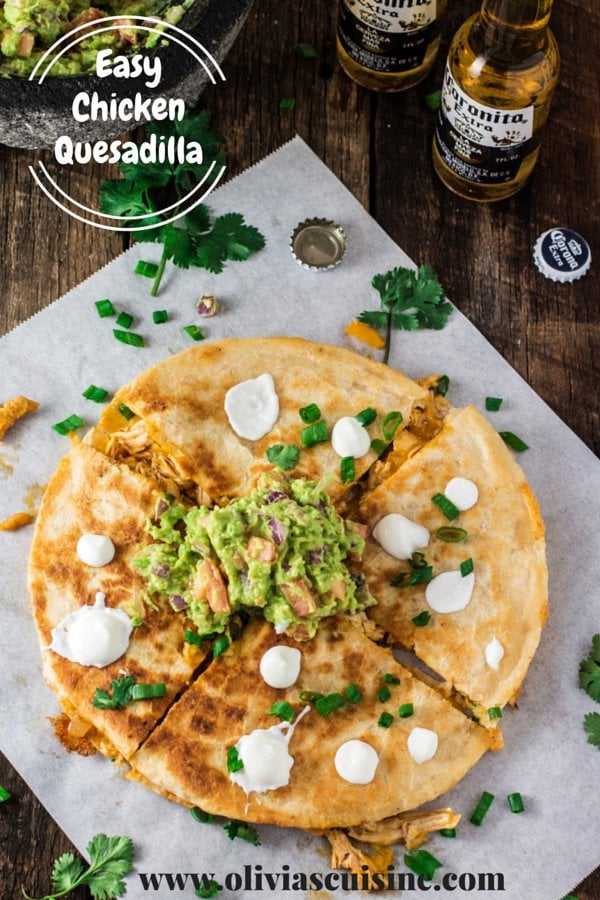 … which is funny because before I moved to the U.S., I had no idea Cinco de Mayo was even a thing! Brazilians are definitely missing out on this holiday and all the Mexican food that comes with it.

Not that I need an excuse to eat Mexican food! Especially not this Easy Chicken Quesadilla that I have to say was devoured in a matter of seconds. I mean how could we not adore this quesadilla? First, it has cheese! Second, it’s so easy to make and is a great option for those busy weeknights. And third, it’s loaded with flavors with chicken, peppers, onions, garlic and roasted Pasilla chile sauce. Then it is grilled to perfection until the cheese melts and your whole apartment smells like Mexican Heaven! Drooling much? I am!

Tim liked this so much that once he was done eating, he got up and went to the kitchen to try and make another one. By the time I saw him, tortilla in hands, looking confused at the stove, I barely had time to stop him and tell him he couldn’t eat another one because I was going to take pictures for the blog. Ooooh his sad puppy eyes! I was heartbroken, so I gave him ice cream instead! lol 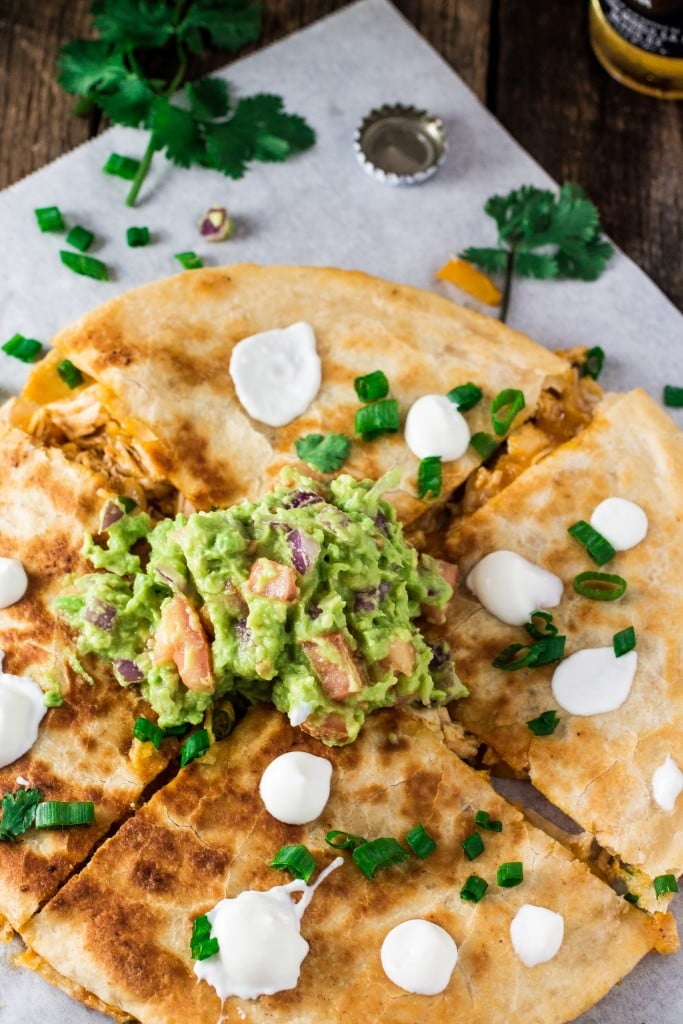 But, back to Cinco de Mayo. If you’re not in North America, chances are you probably never heard of this holiday. Mostly because it is only celebrate in the United States and in Mexico, where it is called El Día de la Batalla de Puebla (The Day of the Battle of Puebla).

The date is celebrated to commemorate the unlikely victory of the Mexican army over the French forces at the Battle of Puebla, on May 5, 1862. Yay Mexican army!!! However, many people – including me, before I took time to research it – mistaken the holiday as Mexico’s Independence Day which is actually celebrated on September 16.

Here in the US, this holiday is more about Mexican Americans celebrating this day as a source of pride and honor to their ethnicity. In NYC you will see Mexican flags everywhere and lots of bars and restaurants decorate and stock up with margaritas and lots of Mexican food for the fiesta! 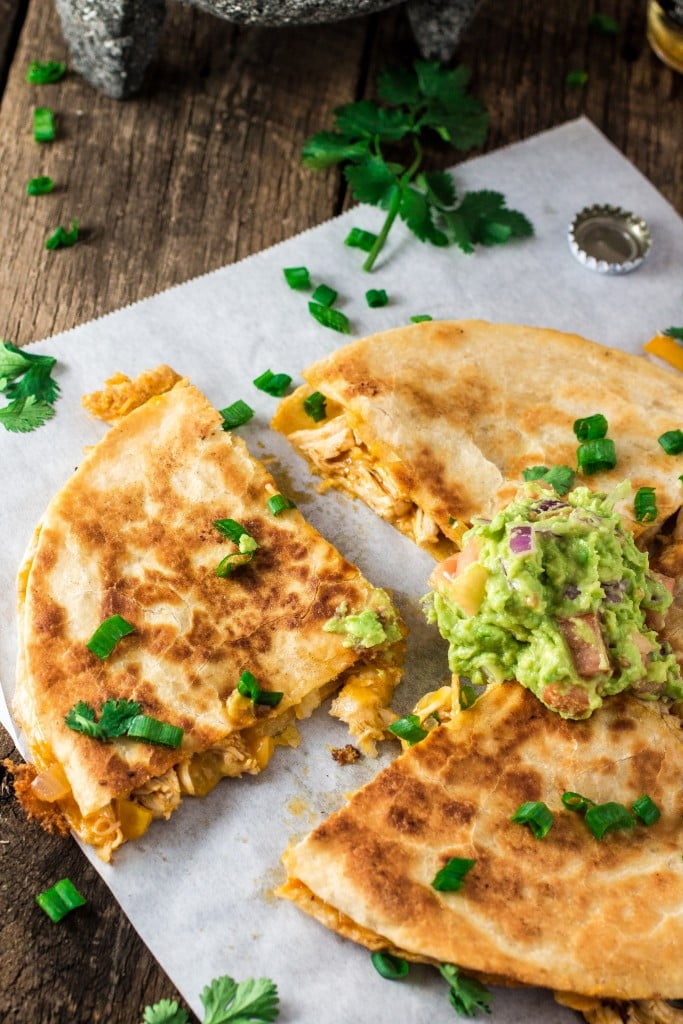 This time I won’t be able to join my Mexican friends for the party. As much as I would love to go out and have one too many Watermelon Margaritas, I broke 2 toes on Thursday. Ouch ouch ouch! You know, just being the clumsy me, I hit the corner of the couch and got two purple broken toes to add to the extensive list of ailments of 2015!

So no going out and celebrating Cinco de Mayo for me. Because I risk getting drunk and breaking the other 8 toes. Bummer!

I’ll probably just make some more quesadillas, open a few bottles of Corona and celebrate the fiesta at home with my husband. (I know I’m blaming the broken toes, but the truth is this is way more up my alley than going pub crawling! Yes, I’m a 30 year old in a 70 year old body! No shame here!) 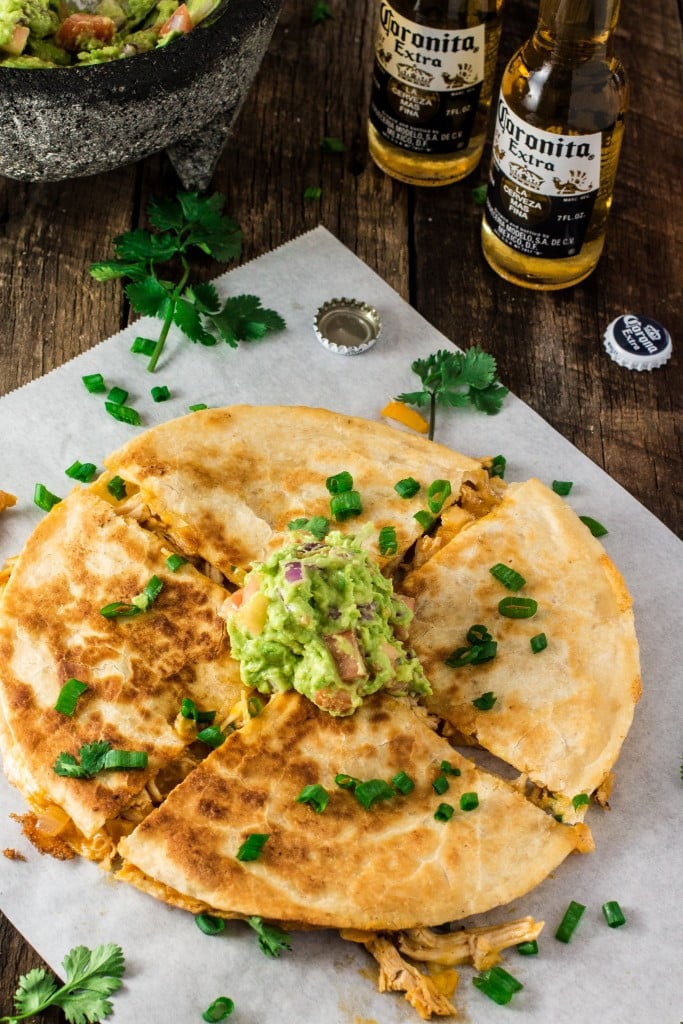 I must confess the only part that annoys me when making chicken quesadilla is having to wait to the chicken to cook, then waiting for it to cool and finally shredding it. It can be soooo boring for people that lack the patience, like me!

The solution? Well, there the obvious one, which is buying rotisserie chicken. Or, there’s the super duper hack of cooking the chicken in the pressure cooker for 15 minutes, draining the water, closing the pan again and then shacking it (with the chicken inside, obviously!) for 10 minutes! Ta-daaaa, magic! You will never fringe at recipes that call for shredded chicken again. (If you don’t have a pressure cooker, I highly recommend you get one! It is an investment for life!)

Now, all that’s left to do is open a Corona or make a margarita and your Cinco de Mayo fiesta is done!

Cooking the chicken on a regular pan: 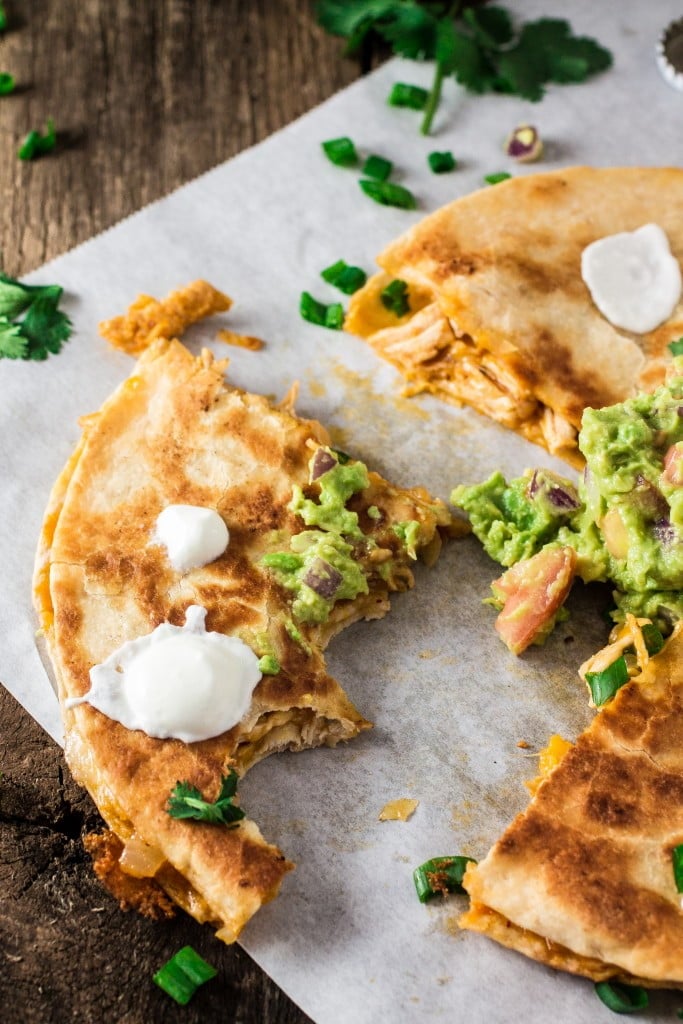 (This post contains affiliate links, meaning I get a small commission if you end up purchasing the product I recommended!)