A classic Beef Stroganoff is comfort food at its best! Slices of tenderloin steak, onions and cremini mushrooms coated with a flavorful creamy sauce. And the best part? It will be on the table in less than 30 minutes! 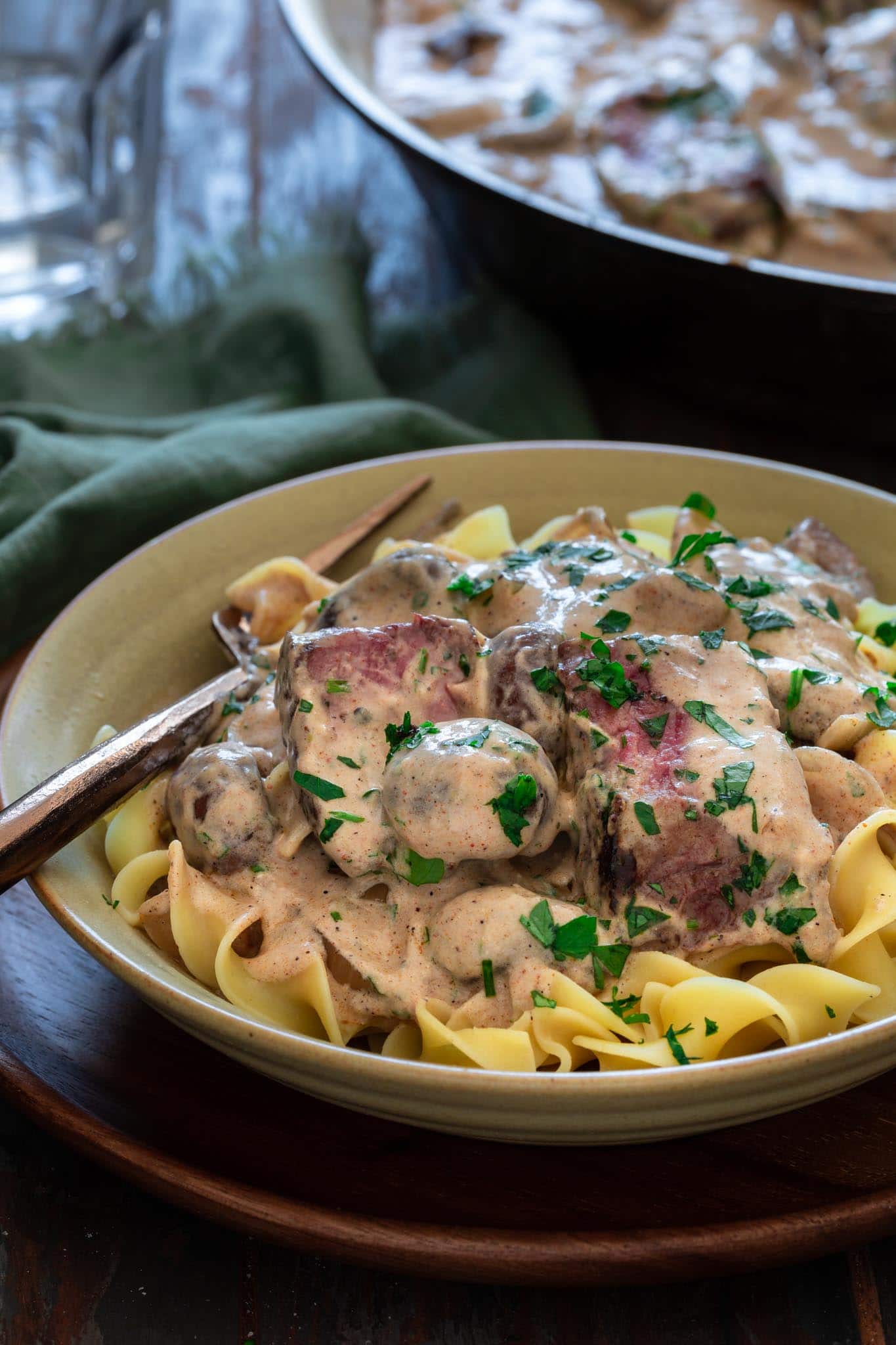 Who can resist a plate of beef stroganoff? Not me! In fact, I love it so much that my recipe for Brazilian style stroganoff was the first post I’ve ever shared on this blog!

While the Brazilian version – which is quite different, made with tomato sauce and heavy cream – is still my favorite, I felt like I needed to have the classic, Russian style stroganoff recipe on my repertoire. And so I played around with a few versions until I was satisfied with the results.

Juicy meat? Check. Tender but not rubbery mushrooms? Double check. And, the best part, a decadent, super creamy, packed with umami flavors sauce (that won’t curdle or break)? You bet!

An elegant yet simple dish that is guaranteed to soothe your soul! You might call it “retro”, but something this delicious will never go out of style! 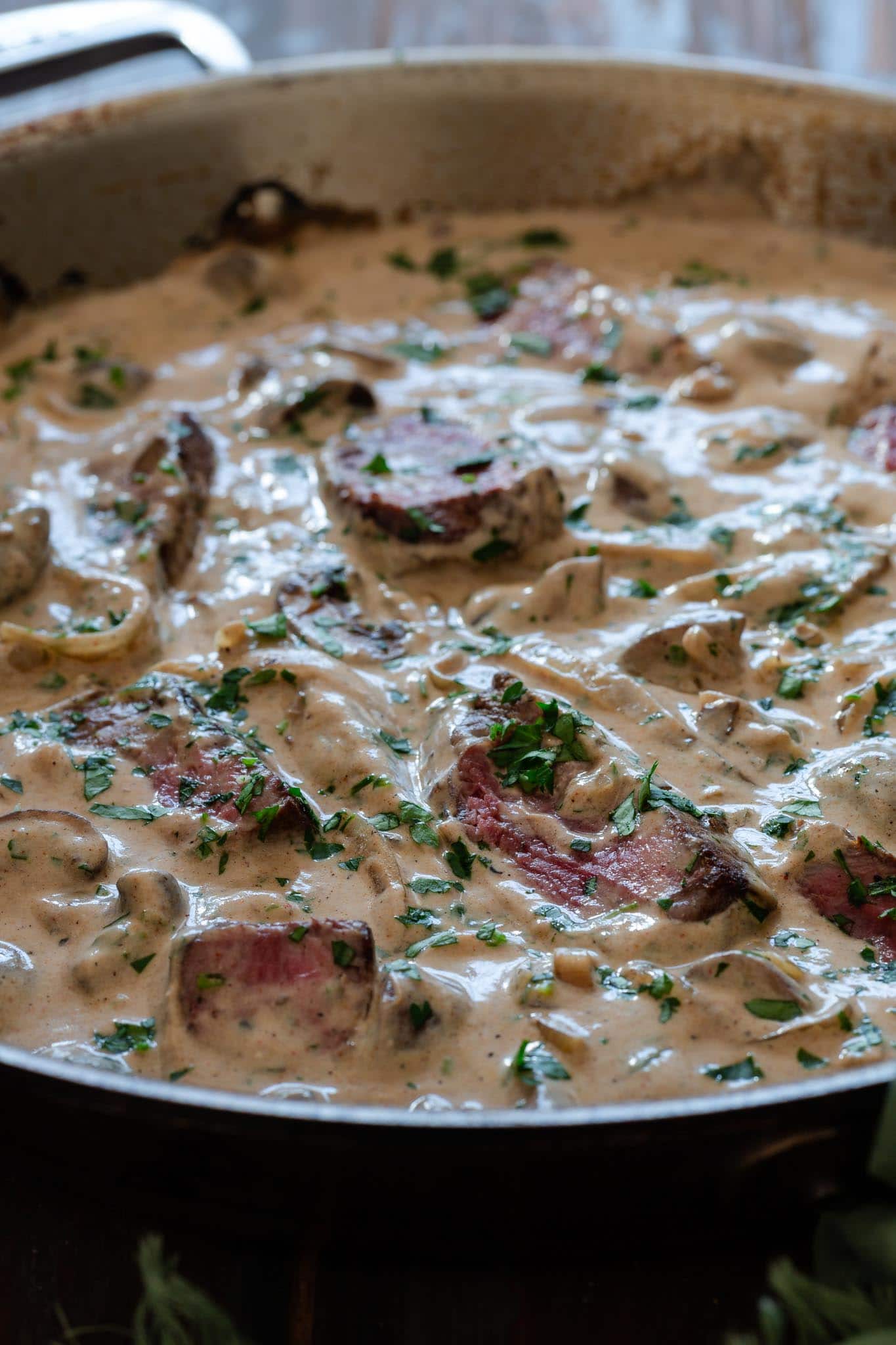 How to make beef stroganoff

This is such an easy and quick recipe! And the best part? No cream of mushroom soup nonsense!

I like to use Kenji’s technique and cook the steaks whole, slicing them just before serving. I know it’s not the traditional way of making stroganoff, but searing the meat in large steaks keeps the meat from steaming and overcooking, giving you moister and juicier results without compromising on flavor! You will notice I now use that technique in pretty much all my stew recipes. It really makes a difference!

Once the steaks are cooked and resting, we sauté the mushrooms and onions. And then it’s sauce time! A splash of brandy, a couple cups of beef broth, some mustard and paprika, Worcestershire sauce and sour cream. The secret here is to wait to add the sour cream until the very end, temper it with a bit of the hot broth and then add it to the pan just long enough to warm it, as boiling can cause it to curdle.

When the sauce is ready, you can place the steaks back into the pan – along with their drippings – to reheat briefly. Then you can slice them – or cut them into cubes or strips for a more authentic stroganoff look – and serve!

What is stroganoff served with?

Here in the U.S., beef stroganoff is usually served over egg noddles or pasta. In Russia, you will most likely find it served with fried potatoes, sometimes over mashed potatoes or rice.

The Brazilian version is served similarly to how they eat in Russia: with rice and fries! And while I would never turn down a plate of stroganoff over noodles, this is still my favorite way to eat it. 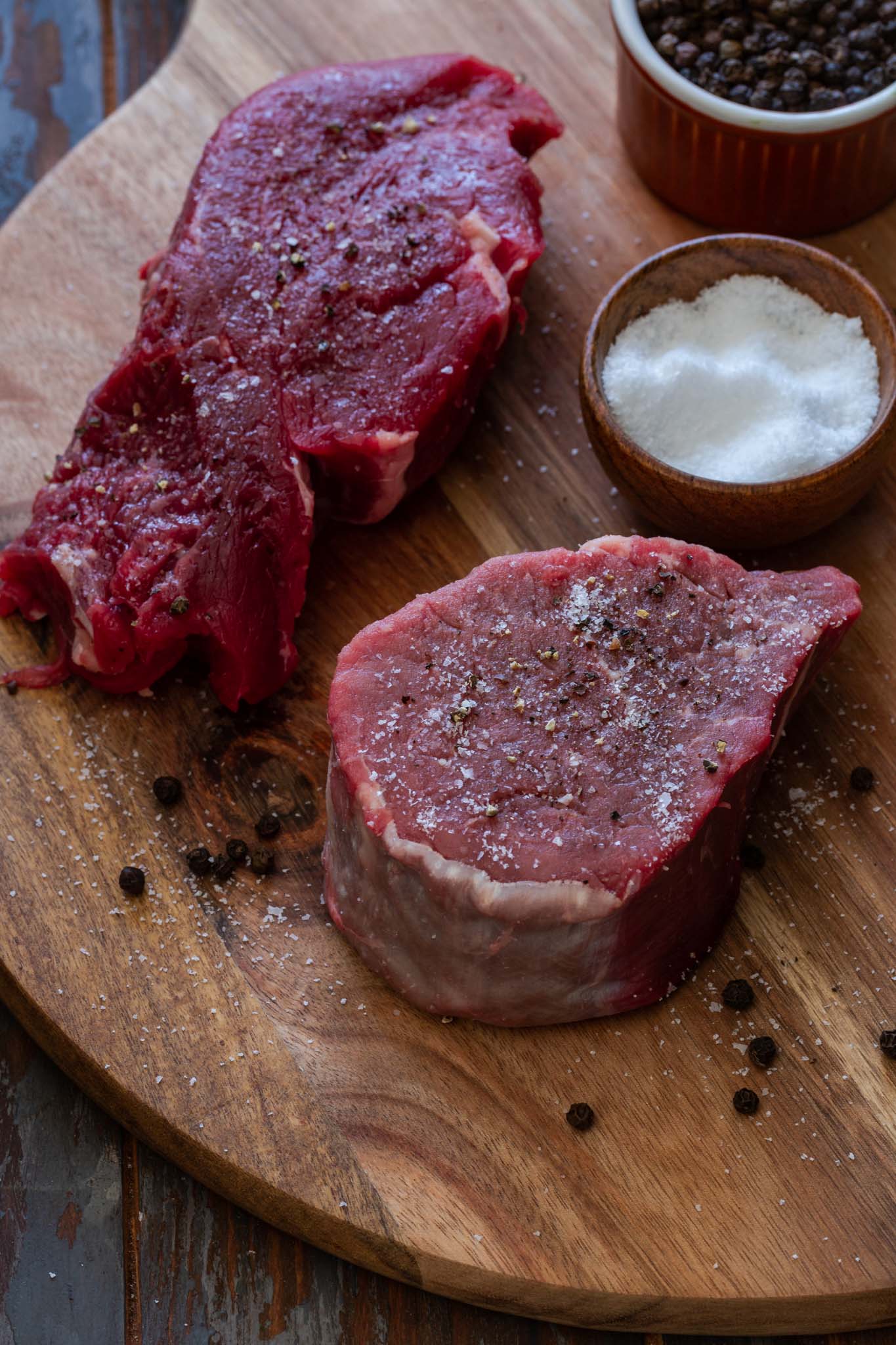 What is the best cut of beef for stroganoff?

I think we can all agree that chewy beef stroganoff is not what we want to be eating! So stick to tradition and get tenderloin steaks. Yes, it will cost you a little more, but it will give you the best results in terms of texture.

If tenderloin is not on the budget, other good options are:

Cheap cuts, like chuck (my favorite cut for beef stew), will not work here. I have seen a few slow cooker versions for stroganoff using stew meat, but I haven’t tried them! When – and if – I do, I will make sure to let you know my thoughts. 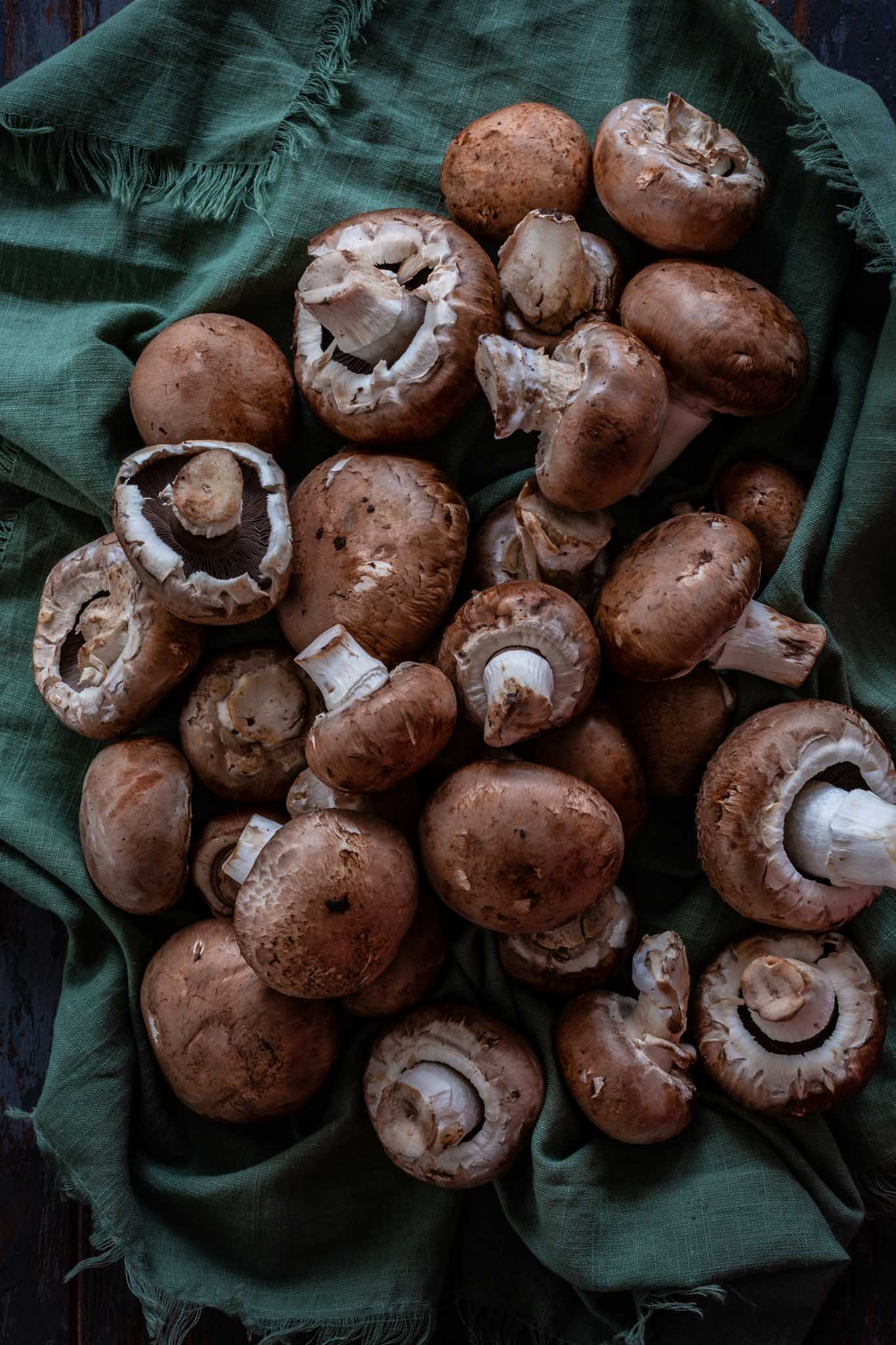 Which kind of mushrooms to buy for beef stroganoff?

Honestly, any (edible) mushrooms will do!

Most versions I’ve seen use the common white button mushrooms, sliced thin. In Brazil, people often use what they call champignon, which are small white bottom mushrooms that come in a jar. Oh, I hate those with a passion! I spent a good part of my stroganoff eating years picking those out of my plate.

That being said, my favorite mushrooms for stroganoff are cremini mushrooms. They have a denser texture and deeper flavor! And I like to halve or quarter them, as opposed to slicing, as I do like the textural contrast that that adds to the dish.

Want to get fancy? Use chanterelles or mousserons, if you can get your hands on them! 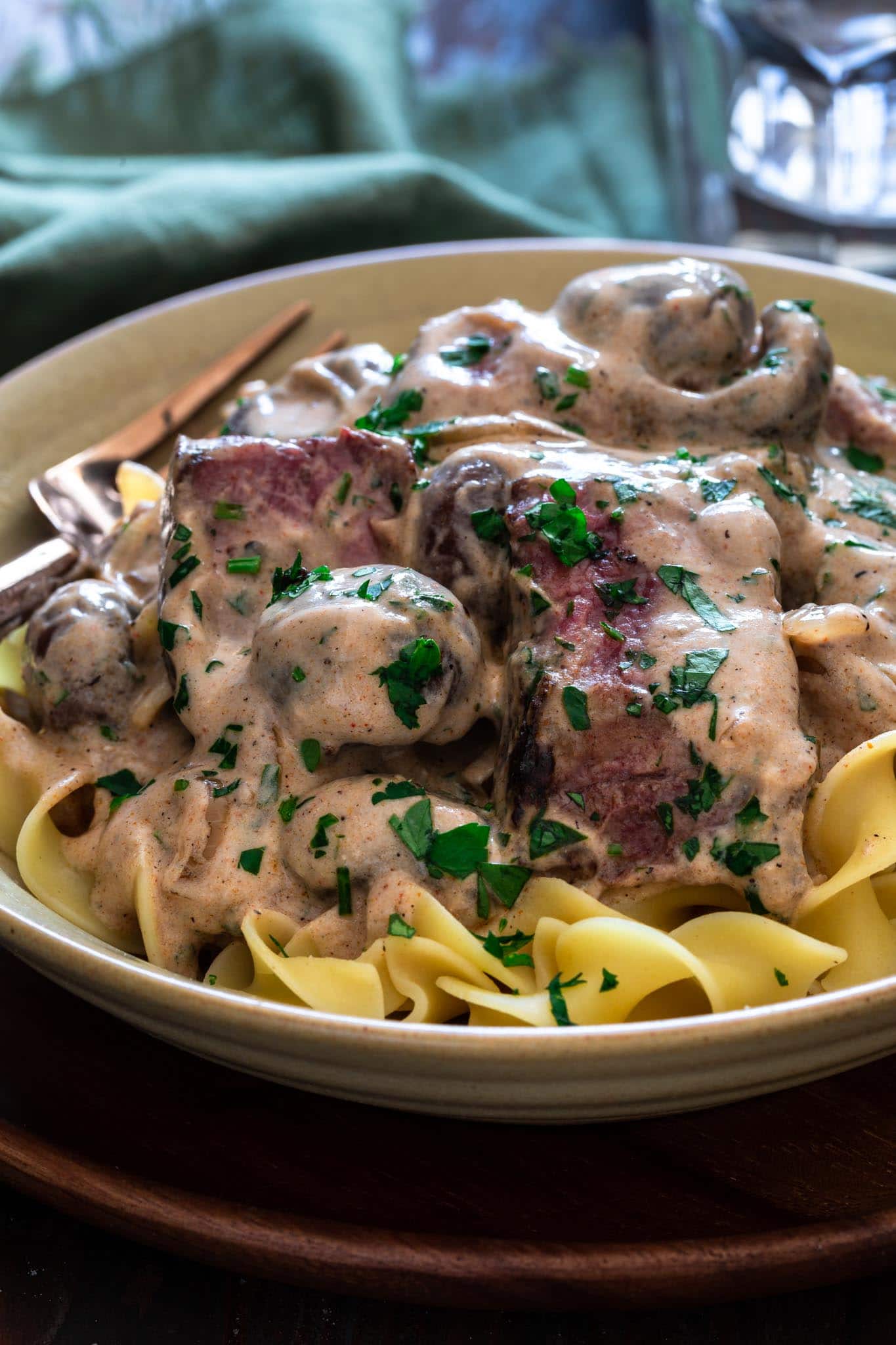 Why my stroganoff sauce curdled?

As I mentioned earlier, sour cream can curdle if added directly to hot liquid. To prevent that, I strongly suggest you temper the sour cream by adding a ladleful of the hot broth into it, stirring until emulsified, and then adding the warm cream to the pan.

Once the sour cream is incorporated in the sauce, you should not let it boil. Low and slow is your safest bet!

If you want to make stroganoff ahead of time, prepare everything according to recipe instructions and hold off on adding the sour cream. When ready to serve, reheat the sauce, warm the steaks in the sauce, remove steaks for slicing and then temper and add sour cream.

“Olivia, I didn’t follow that step, added cold sour cream directly to the pan and my sauce curdled! What do I do?”

Gee, read all the instructions next time! Just kidding… Just make a roux and slowly whisk in the curdled sauce. Alternatively, you can add a splash of heavy cream and cross your fingers it will emulsify and look creamy.

How to reheat beef stroganoff

Skip the microwave! Instead, add your leftovers to a sauce pan, with a little bit of heavy cream, and reheat over slow heat.

Can I freeze stroganoff?

I do not recommend freezing dishes that contain cream. The sauce might separate and the texture will get grainy and curdled. Will it be safe to eat? Yes. But don’t expect it to resemble its original pre-freezer state!