posted by Olivia Mesquita on February 8, 2022 2 comments »
Jump to Recipe
This post may contain affiliate links. Read our disclosure policy. 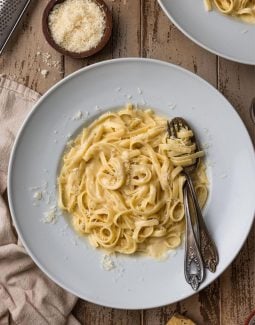 The original Fettuccine Alfredo – called fettuccine al burro in Italy – is a simple pasta dish consisting of fettuccine tossed with lots of butter and parmesan. With only 4 ingredients and ready in 15 minutes, this recipe is perfect to have on hand for when you are craving easy comfort food!

While time consuming recipes such as my Bolognese sauce or my Braised Beef Ragu are definitely worth the work, nothing beats quick and easy, especially when you are short on time and need a quick dinner.

I first had Fettuccine Alfredo when I was a pre-teen, while visiting EPCOT at Disney World. We dined at L’Originale Alfredo di Roma Ristorante, which is one of Alfredo’s sister restaurants, opened by the descendants of the Di Lelio family.

It was love at first bite! Being a girl from Brazil, this was the closest to a mac and cheese that I had ever tasted. And I became obsessed with it ever since!

Unfortunately, I only had that same fettuccine Alfredo again once I found out that there was a L’Originale Alfredo di Roma Ristorante in NYC. But it has since closed!

I did learn to enjoy American-style Alfredo. It has it’s time and place! But the real fettuccine Alfredo has my heart. ♥️ And I was forced (twist my arm, won’t you?) to learn to make it homemade, as chances are this is not the Alfredo you will find at restaurants here in the States. Thankfully, it is one of the simplest dishes you could ever make, and you’ll only need 4 ingredients, including salt.

But don’t let the world “simple” fool you. This is one of the most delicious pasta recipes ever and I’d be eating it every day if it weren’t for the amount of butter that goes in it! 😂

If all you know is the American Alfredo, I beg you to try this version. But be careful: it is extremely addicting!

What is Fettuccine Alfredo?

Is it really Italian?

If you go to Italy and try to order fettuccine Alfredo at a restaurant, they’ll probably look at you like you have three heads. However, ask for fettuccine al burro and they’ll know what you are talking about!

So the answer is: yes. Fettuccine Alfredo, when made the authentic way (with only butter and parmesan) is Italian. They just don’t know it by that name!

Why is it called Alfredo?

The dish got the name Alfredo because Alfredo di Lelio featured this pasta at his restaurant “Alfredo” in Rome back in the early to mid-20th century. The ceremony of preparing it tableside was an integral part of the dish

Legend has it that Alfredo came up with this dish in 1907 or 1908, in an effort to get his wife, Ines, to eat since she had lost her appetite after giving birth to their first child Armando. To make the pasta extra appetizing, he added three times the amount of butter that he usually would, and therefore he first called the dish “fettuccine al triplo burro”.

It wasn’t long before the fettuccine Alfredo’s fame spread to the world.

In the 1920s, Douglas Fairbanks and Mary Pickford – famous Hollywood stars – dined at Alfredo while visiting Rome for their honeymoon. They fell in love with the dish and asked di Lelio for the recipe, which he gladly gave to them. They later sent him a set of a golden fork and spoon engraved with the words “To Alfredo, the King of the Noodles” with their names and date of July 1927, to express their gratitude.

As soon as the couple got back to the States, they spread the word of the delicious pasta. Soon, Alfredo became a must-stop for celebrities visiting Italy. Everyone from Sophia Loren to Frank Sinatra visited Alfredo to taste the famous fettuccine Alfredo that everyone was talking about!

Somewhere along the way, here in the United States, fettuccine Alfredo transformed into a version containing heavy cream. Perhaps it was in 1966, when the Pennsylvania Dutch Noodle Company, in efforts to market their dried “Fettuccine Egg Noodles”, published a recipe for Alfredo sauce on the package of their pasta. The recipe included cream and Swiss cheese, as well as the usual parmesan and butter.

The American chain restaurant Olive Garden can also be credited to making the cream version of fettuccine alfredo famous. They carry several dishes that have “alfredo” in their names, including “chicken alfredo” and “seafood alfredo”. Those would have di Lelio turning over in his grave! 🙈🙈🙈

To make authentic Fettuccine Alfredo, you will need:

How to Make Fettuccine Alfredo

Welcome to the easiest pasta dish recipe you will ever make!

In a nutshell: cook the pasta and toss with butter, cheese and pasta water. Voila! 😋

The reality: yes, this is an easy recipe but there are a few tricks to ensure the sauce doesn’t curdle or congeal. You will find them below!

Here’s how I make this Fettuccine Alfredo recipe. As always, you will find the printable (and more complete) version of the recipe at the end of this post!

Step 2: Stir everything together!

The original Fettuccine Alfredo was always served by itself, as pasta and meat dishes are usually separated in Italian cuisine. Here in the US, it is often served with grilled chicken or shrimp. However, I personally think it goes great with a juicy steak! 😋

A nice green salad and some crusty bread will round up the meal if needed.

As for wine pairing, Fettuccine Alfredo can be paired with both white or red wines. Something slightly acidic to balance the richness of the buttery sauce, such as a Chardonnay or Pinot Noir.

This fettuccine Alfredo recipe is the dish I make when I don’t have time to make dinner. Can’t beat 4 ingredients and ready in 15 minutes, amirite? It is also very versatile, so you can mix in veggies and/or protein if you want to make it more filling.

Can Fettuccine Alfredo be made ahead of time?

No, Fettuccine Alfredo does not freeze well.

How long will leftovers keep?

Leftovers will keep in the fridge, stored in an airtight container, for up to 5 days.

How do I reheat Fettuccine Alfredo?

Reheated fettuccine Alfredo will never taste as good as freshly made. But that doesn’t mean it’s not delicious! If you plan on having leftovers, save some extra pasta water for when you reheat it. Then, reheat in a saucepan, adding a little bit of the reserved pasta water (or just water, if you forgot to save extra!) and butter, over medium-low heat. 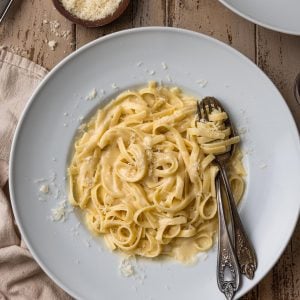 Servings: 4
Prep Time: 5 mins
Cook Time: 12 mins
Total Time: 17 mins
author: Olivia Mesquita
course: Main Course
cuisine: Italian
The original Fettuccine Alfredo – called fettuccine al burro in Italy – is a simple pasta dish consisting of fettuccine tossed with lots of butter and parmesan. With only 4 ingredients and ready in 15 minutes, this recipe is perfect to have on hand for when you are craving easy comfort food!
No ratings yet
Print Recipe Pin Recipe Rate Recipe

How to Warm Plates Stack your plates or bowls and place them in the oven, at its lowest setting (usually 150ºF), for 15 minutes. Alternatively, if your plates/bowls are not oven safe, just run them under hot water and dry with a kitchen towel before plating the food. Authentic Alfredo sauce tends to want to solidify when served in cold plates, due to the temperature shock. Storage and Reheating While fettuccine Alfredo tastes best when freshly made, that doesn’t mean you shouldn’t enjoy your leftovers! The leftovers will keep in the fridge for up to 5 days, stored in an airtight container. They do not freeze well. Reheat on the stove, over medium-low heat, adding more water (or pasta water, if you remembered to save extra) and butter. Nutrition Trust me, you won’t want to look at the nutrition numbers for this recipe. Life is too short for that! 😂

posted by Olivia Mesquita on February 8, 2022