posted by Olivia Mesquita on June 24, 2020 2 comments »
Jump to Recipe
This post may contain affiliate links. Read our disclosure policy.

Mexican horchata is sweet, creamy and oh-so-addicting! Traditionally made of rice blended with water and cinnamon, my version takes it up a notch by adding dairy for richness and extra creaminess.

(This post is sponsored by my friends at Carolina® Rice. All opinions are my own.)

Oh, Horchata, where have you been all my life?

It was only after moving to the U.S. that I tried it for the first time, as it is not popular in Brazil. In NYC though, it has been one of the trendiest drinks for the past 3 years!

So it was only a matter of time before I came across it. And being the Arroz con Leche lover that I am, it was love at first sip! When made with dairy, like my recipe is, it truly is like drinking rice pudding.

If you’re a purist and think adding milk is blasphemy, this recipe is not for you. (Just kidding. Keep reading and I’ll give you a couple of options!)

However, if you – like me – loves your horchata a bit indulgent, hello! Welcome to the creamiest, richest (but still refreshing) horchata recipe you will ever make.

Thanks for coming to my horchata TED talk!

Plus a printable recipe.

Horchata, also known as orxata, is a sweet drink with different versions across Latin America.

While most Americans associate horchata with the Mexican variety, the drink was originally made from soaked tiger nuts (chufa nuts) and originated in North Africa as far back as 2400 B.C with the name kuunu aya.

The refreshing drink was famous for its cooling properties and people would drink it on hot days and to lower fevers.

In the 13th-century, the Moors brought it to Spain and there it got its name, horchata de chufa. It eventually travelled across the ocean to the Americans and evolved to include other ingredients, like rice, almonds, and sometimes even dairy.

Nowadays, the Mexican Horchata can be found for sale at grocery stores throughout Mexico and the U.S. in both ready-to-drink and powdered forms. But, in my opinion, nothing beats homemade!

What is the difference between Spanish and Mexican Horchata?

Horchata de Chufa, the Spanish version, is made of dried and ground tiger nuts while the Mexican Horchata de Arroz is made of rice.

Traditional Mexican horchata is indeed dairy free, but my version contains dairy as I like it very creamy!

However, you can absolutely omit the milk products or you can check out this dairy-free version on Carolina Rice’s website.

Horchata ingredients vary according to region or preference. Here’s what I use on mine:

CINNAMON STICKS – Another mandatory ingredient for the authentic Horchata flavor. I like to use the sticks for a stronger flavor, but you can use ground cinnamon if that’s all you have.

EVAPORATED MILK – I like to use evaporated milk instead of regular milk because it’s not only creamier and richer, but has a slightly toasted flavor that makes this rice drink even more delicious. If you don’t have it on hand, you can use an equal amount of whole milk instead.

SWEET CONDENSED MILK – Adds both sweetness and creaminess without watering down the drink even more. You can substitute it with 1 cup of sugar, or to taste.

SALT – A small pinch of salt brings out the flavors and balances the sweetness.

VANILLA EXTRACT – Optional, but gives the horchata richness and depth of flavor.

HEAVY CREAM – Also optional, but I like my horchata very indulgent!

Which rice is best?

Mexican horchata is usually made with long-grain white rice, but you can find versions using brown, basmati and jasmine rice.

I stick with the classic: Enriched Long Grain Rice from Carolina® Rice. It gives me the most authentic horchata flavor, letting the cinnamon shine through!

Being Brazilian, rice is a huge part of my diet. After trying several brands, Carolina® Rice is the one I love and use to make not only horchata but my Brazilian-Style Rice and other rice dishes.

You can use their store locator to find it at a store near you!

How to make Mexican horchata

Making horchata is very easy and doesn’t require any special skills or equipment.

That being said, you will have to plan ahead, as the rice needs to be soaked for at least 4 hours, or – ideally – overnight.

Some people like to strain the rice water after soaking and discard the rice grains, using only the water to make the drink. That is an option if you don’t like the chalky taste of traditional horchata, but I find that you lose that special “Arroz con Leche” taste that I love in this drink!

If you choose to keep the rice grains, I recommend you use a strong high-speed blender, so the grains can be completely pulverized.

Here’s how I make homemade horchata. As always, you will find the printable (and more complete) version of the recipe at the end of this post!

How long can you soak rice?

Planned on making horchata but had something come up? Been there, done that.

Rice can be soaked in pure water for up to 48 hours, if kept in the fridge. More than that and the rice begins to ferment and we don’t want that.

It’s very important to refrigerate it as wet rice is more vulnerable to bacteria and can go bad within a few hours.

Since this horchata recipe contains dairy, it will only last for up to 3-4 days in the fridge.

What to serve with horchata?

This is the perfect drink to go with your Mexican food, especially if it’s spicy!

Mexican horchata is so popular that several variations have been invented. These are some of my favorites: 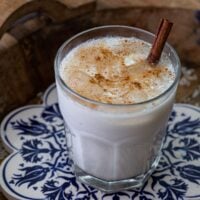 I recommend using a cheesecloth for a smoother drink. If all you have is a fine-mesh sieve, I would strain the horchata at least twice to make sure you get all the ground pieces of rice and cinnamon.

While you can pour your freshly made horchata over ice and enjoy it right away, I like to chill mine for 1 or 2 hours so it’s even more refreshing. Just make sure to give it a good stir as some of the starch will sink to the bottom as it sits in the fridge.

Making Ahead or Storing Leftovers

This homemade horchata will keep for up to 3-4 days in the fridge. However, I find that it’s best enjoyed the day it is made!

Why is my horchata chalky?

Since horchata is made of rice, it is naturally a little chalky. If that bothers you, remove the rice grains before blending, using only the water that resulted from soaking the rice overnight.

If you love this Mexican Horchata, you will also like these: