posted by Olivia Mesquita on November 16, 2019 2 comments »
Jump to Recipe
This post may contain affiliate links. Read our disclosure policy. 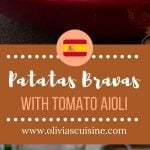 Spain’s most popular tapas, Patatas Bravas are impossible to resist! Crispy home fries tossed with a mildly spicy tomato aioli. One bite and this will surely become one of your favorite potato dishes!

Throwing a tapas party? Don’t forget to grab the recipes for my Goat Cheese and Caramelized Onions Crostini, Charcuterie Board, Beef Empanadas and Spanish Gazpacho Soup to complete your feast.

A few months ago, for my birthday, my dear friend and neighbor took me to a local tapas restaurant to celebrate. That was the day I tasted the best potato dish of my life: patatas bravas.

I unfortunately haven’t been to Spain, so tapas restaurants are as close as I can get to Spanish cuisine. I’m saying that so you take this post with a grain of salt, as I cannot claim authenticity.

What I can claim, though, is that this recipe tastes exactly like the one I had at the restaurant. Perfectly fried potatoes tossed with a to-die sauce, with just a little heat.

And while this is technically supposed to be served as a tapa, meaning an appetizer or snack, I’ve been serving it as a side dish and my family can’t get enough!

What are patatas bravas?

Patatas Bravas, also known as Papas Bravas or Patatas a la Brava, is a Spanish dish served in tapa bars all throughout Spain.

Originally from Madrid, it usually consists of irregular potato chunks of about 1 inch, fried and drizzled with Bravas sauce (Salsa Brava), a mildly spicy tomato sauce.

The name “Bravas” makes allusion to the dish spiciness, and it means “fierce”, “angry” and/or “ferocious” in English. But while you could certainly bump up the heat, the sauce is usually mild, made with a base of tomato, sherry vinegar, paprika and just a pinch of chili (like cayenne peppers).

However, there are as many Patatas Bravas recipes as there are cooks in Spain, so you will find lots of variations.

Some restaurants will offer options with a number of extra toppings, like chorizo, chistorra (a fast-cured sausage), chicken and/or fish.

You will also find the Bravas sauce used in other Spanish recipes, like the Tortilla Brava, a omelet topped with the sauce, and the Mejillones en Salsa Brava, a mussels dish.

For the Bravas Sauce:

What is the best potato for frying?

Due to their high starch and low moisture content, Russet potatoes are the best kind of potatoes for frying. They crisp up nicely, better than other kinds.

That being said, Yukon Gold and Red Potatoes can also be used in this recipe. They just won’t stay as crisp as russets.

How to make patatas bravas

Let me start by saying my Bravas sauce recipe is a little different than the other ones you will find online.

Usually, Patatas Bravas are served with Bravas sauce AND a garlic aioli. In my version – similar to the one I had at the tapas restaurant – they are combined! Why bother making two different sauces when they are both gonna end up drizzled on the fries anyway?

Oh, and speaking of the “drizzling”… Mmm, how do I say this? Just go ahead and smother your fries with the sauce. Feel free to just drizzle the sauce on your fries if you prefer, but believe me when I say, the Bravas Sauce is the star of the show here!

Can I make patatas bravas healthier?

While you can’t beat the crunchiness of a fried potato, you can certainly bake Patatas Bravas instead.

You will want to parboil them and then toss with oil and salt before baking at 400 degrees F, until golden and crispy.

Can I make papas bravas ahead of time?

Yes! The Bravas sauce can be made up to 2 days ahead and refrigerated.

As for the potatoes, after the first frying step, you can drain then and refrigerate overnight or freeze in an airtight container for up to 3 months.

When ready to serve, fry them at 425 degrees F until golden and then toss with the sauce (at room temperature).

How to serve patatas bravas

As I mentioned earlier, Papas Bravas are usually served as an appetizer, among other Spanish tapa dishes. Oh, and don’t forget the wine (or beer)! This is a bar food after all.

You can also serve them as a side for meats – it goes great with grilled skirt steak! – or even with eggs, for breakfast or brunch.

For the Bravas Sauce:

Make ahead - The Bravas Sauce can be made ahead and refrigerated for up to 2 days. Let it come to room temperature before tossing with the potatoes, or they will get soggy quicker.

The potatoes can be partially fried (first frying step) and then drained and refrigerated for one day. Alternatively, they can be frozen for up to 3 months. When ready to finish, just heat the oil to 425 degrees F and fry them straight from the fridge or freezer. The oil temperature will drop considerably, so adjust accordingly.

Looking for more appetizers? Check these out: