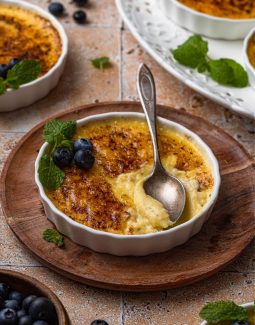 Vanilla Creme Brulee is the quintessential French dessert! It’s a rich, creamy custard topped with a crackly caramel topping made from caramelized sugar. Despite the fancy French name, it is easy to make and requires only 5 ingredients!

Creme Brulee is one of my favorite recipes to order when dining at a restaurant. I just can’t resist it!

But that also means that I’ve had my fair share of “meh” creme brulee. Runny, bland, brulee topping not crackly enough, different flavor twist gone wrong (I’m looking at you matcha), you name it! So I decided it was time to learn to make it homemade and I braced myself to something incredibly difficult, complicated and… well, French!

To my surprise, this was one of the easiest dessert recipes I have ever done. Yes, it requires planning ahead because the custard has to chill in the fridge for at least 4 hours. But, apart from that, making creme brulee is a walk in the park!

In a way, I’m kinda glad I didn’t learn this earlier in life, or I’d be even more overweight than I already am! 😂

What is Creme Brulee?

Crème Brûlée (pronounced krem-boo-lay), which means “burnt cream”, is a French dessert that consists of a rich custard topped with caramelized sugar. The classic version is flavored with vanilla, but nowadays you can find lots of different creme brulee flavors, such as chocolate, lemon, matcha (🙄), and even lavender!

Earlier versions of this dessert in France had the brulee topping presented as a previously prepared caramel disc. It is only in modern versions that the sugar is burnt with a torch.

Where did it originate?

France, England and Spain all claim to be the ones that created the first version of this dessert.

The first recording of creme brulee in its French form happened in 1691, in François Massialot’s cookbook called Le Cuisinier Royal Et Bourgeo. However, since custards have been popular across Europe since the Middle Ages, it’s impossible to pinpoint the creme brulee’s roots.

The crema catalana, which is the Catalan dessert the Spanish claim inspired the creme brulee, dates back to the 14th century. It is very similar to creme brulee, but made with milk instead of cream, and flavored with orange (or lemon) zest and cinnamon. It is traditionally served on Saint Joseph’s Day.

Then there’s England’s claim, a similar custard dessert with a caramelized topping, called “Trinity Cream” or “Cambridge Burnt Cream”. It was introduced at Trinity College, in Cambridge, in 1879, and the blistered sugar topping was embossed with the college arms via a branding iron. Legend has it that it was an undergraduate that offered the recipe (from an Aberdeenshire country house) to the college cook. The cook initially turned it down but later, after the student became a fellow, started serving it. That dessert is still served at the school today!

That all being said, it wasn’t until well into the 1980s that the creme brulee gained the popularity it has today, probably after Sirio Maccioni introduced it at his New York restaurant “Le Cirque”. According to food writer Colman Andrews, it became “a symbol of that decade’s self-indulgence and the darling of the restaurant boom”.

To make this Vanilla Creme Brulee recipe, you will need:

How to Make Vanilla Creme Brulee

Is it difficult to make creme brulee? No. Can it go terribly wrong? Yes, if you try to skip some steps or under/overcook it.

These are some common creme brulee problems and the reason they happen:

If you encountered the problem of an unset custard, you can fix it if you don’t mind the extra effort. I have not tested this method, but according to my research, it works. Just scrape off the custard into a strainer and press with a rubber spatula, into a bowl. That should leave you with a smooth custard base. Place the custard in a double boiler and slowly heat it, then transfer to ramekins and bake in a water bath in a 300ºF oven, until set.

But if you follow my recipe and tips, you will not have to fix anything as your creme brulee will come out perfect every time!

Here’s how I make this creme brulee recipe. As always, you will find the printable (and more complete) version of the recipe at the end of this post!

Making Creme Brulee without a Torch

For best results, a torch is highly recommended. You can get one on Amazon for as little as 15 bucks!

That being said, if you do not own one and do not want to get one, you can caramelize your creme brulee topping using your broiler. To do that, move your top rack as close to the broiler as possible, then turn the broiler on and broil the creme brulee with the sugar topping for 5 to 10 minutes, rotating them as needed so the sugar caramelizes evenly.

Creme Brulee is traditionally served cold with the topping warm, since you are supposed to torch it and immediately serve it! However, I know some restaurants like to put the creme brulee in the freezer after torching, to quickly set the top and reduce some of the heat. You can do that or even refrigerate the ramekins for up to 30 minutes, but no more than that or the sugar crust will begin to soften.

Garnishing is optional, but if you want to embellish your creme brulee, you can decorate with fresh mint and berries!

Creme Brulee variations are endless! A quick Google search and you will find several creative recipes to try.

What is the best size ramekin for Creme Brulee?

Creme Brulee is traditionally made in wide, shallow ramekins. You can find them in 4-ounce, 5-ounce, and 6-ounce capacity. This recipe was tested in 5oz ramekins and makes 6 of them. If you use the smaller capacity ones, you will probably make more servings. If using a higher capacity ramekin, they might not fill to the very top.

Can Creme Brulee be made ahead?

Since the custard has to chill in the fridge to set, creme brulee is the perfect make-ahead dessert! You can make the custard up to 4 days ahead. The brulee part has to be done right before serving.

Unfortunately, creme brulee does not freeze well. Custards have a tendency to separate when frozen and thawed. 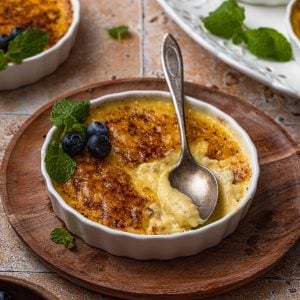