posted by Olivia Mesquita on October 1, 2019 7 comments »
Jump to Recipe
This post may contain affiliate links. Read our disclosure policy. 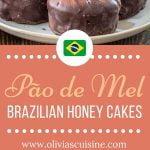 These out-of-this-world Brazilian Honey Cakes, aka Pão de Mel, are everything your sweet tooth could ask for. Spiced chocolate honey cakes, filled with dulce de leche and covered in chocolate! I can’t think of anything better than that!

But, don’t worry, I won’t. I’ll get to all the details so you can recreate them exactly like mine.

This recipe makes quite a lot – about 24 if you use the same size ramekins I used – but I figured it’d be okay, as most people will usually need a lot when making it for parties or to give as gifts. However, if you’re just making them because you are craving a chocolate snack, you can easily halve the recipe!

I last made these in August, as party favors for my daughter’s bee themed birthday. To say they were a success is an understatement! One of the texts I got from a friend, read “What insaneness is this?”.

Yes, they are a bit time consuming to make. But take it from a Brazilian: nothing says I love you like a homemade pão de mel!

What is Pão de Mel?

Despite the name, you don’t really taste honey in these treats. The chocolate and spices are pronounced, almost like in a chocolate gingerbread cookie! The dulce de leche and the chocolate coating take these cakes to the next level, making them rich, indulgent and absolutely delicious.

The origins of these cakes are unknown, but there are two theories that make sense. The first claims that the Brazilian honey cakes are a spinoff of the Russian Pryaniki, a baked good made primarily from flour and honey. As the recipe passed among generations, it changed slightly according to the region, sometimes including other ingredients, like spices.

The second theory believes that the pão de mel originated in Europe, when Europeans discovered that covering spiced cakes in chocolate would keep them flavorful and moist for longer.

Russian or European, if you’re interested in Brazilian cuisine, Pão de Mel is a recipe you absolutely need to make!

Here’s what you’ll need to make the spiced honey cakes:

How to Make Brazilian Honey Cakes

While not difficult and easy to follow, this recipe can be a labor of love, especially if you choose to temper the chocolate.

Totally worth it, though! You will be making these again and again, to give as gifts or to eat as a snack!

The most traditional are dulce de leche and brigadeiro. However, nowadays you can find fun versions, made with ingredients like coconut, strawberry, passion fruit, and many others.

You can also skip the filling and just serve the cakes covered in chocolate.

How to Temper Chocolate

There are several ways to temper chocolate and I would probably have to write 2000+ words if I were going to cover them all. Instead, I am going to teach you the method I use, which happens to be the less messy one.

Why do we temper chocolate?

Tempering chocolate is simply heating and cooling chocolate to stabilize it before using it to make candies and sweet treats. Tempered chocolate won’t easily melt on your fingers, snaps when you bite into it and looks smooth and glossy.

Do you absolutely need to temper chocolate to cover Brazilian honey cake? No. But they will look infinitely better if you do!

Easy peasy right? Not so much. It is important to be precise so you don’t risk burning the chocolate and so you can keep the chocolate tempered while you work with it! I highly recommend investing in a kitchen thermometer, if you don’t already own one.

Here are the steps. I am only covering milk and dark/bittersweet chocolate, as that’s what you would use to cover pão de mel.

If the temperature starts dropping, just pop the bowl back on top of the warm water to raise it back to the tempered temperature. Just remember that the temperature should never go above 90° F or you (and the chocolate) will lose your temper and have to start over again.

Also, keep water far away from your chocolate, as it causes it to seize and separate!

Spiced Honey Cakes – A chocolate gift everyone will love!

Pães de mel make great edible gifts! You can give them as party favors (like I did for my toddler’s birthday party), hostess gifts, Christmas, Valentine’s Day, and so many fun occasions. The spices in these treats make them great for the holidays!

You can put them in cute treat boxes or wrap in specialty cellophane bags that you can find at your local craft store!

For my daughter’s birthday, I stuck colorful straws in the center of the cakes, wrapped them in cello bags and decorated with bows and charming chalkboard stickers. They looked like giant lollipops and were a hit among the children and adults!

These cakes, if covered in tempered chocolate, will last about 2 weeks if properly stored at room temperature and up to a month in the fridge! The freshest the better, though.

Can I freeze Brazilian Honey Cakes?

Yes, you can freeze them for up to 3 months! When ready to eat, thaw overnight in the fridge and let them come to room temperature before serving.

For the honey cakes:

For the dulce de leche filling:

For covering with chocolate:

Did you make my Brazilian Honey Cakes?

Make sure to post a photo on Instagram and tag me at @oliviascuisine! I’m always happy to see your creations.