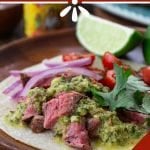 This Carne Asada is a steak lover’s dream come true! Melt-in-your-mouth, juicy and bursting with flavors from a citrusy marinade. So good that you will want to have it on rotation all summer long!

It’s officially grilling season and our grill has been working hard pretty much every night!

Nothing beats a summer backyard grilled dinner. Bonus points if it’s steak! If you want to win my family’s heart, serve us steak. 😍😍😍

So, as you can imagine, this carne asada recipe is a family favorite and it is made quite often in our house, either served by itself (with vegetables) or in tacos and burritos.

Whatever you do, please don’t skip marinating your carne asada. The marinade is what transforms this dish from a simple grilled steak into a juicy explosion of flavors!

Plus a printable recipe!

What is Carne Asada?

Carne Asada, which means “grilled meat” in Spanish, is exactly that: marinated and grilled steak that is sliced thin and served on tortillas or as an ingredient in other dishes.

It is enjoyed throughout Central America, but is particularly popular in Mexico, especially in northern Mexico, where it is considered a staple food and served at parties and celebrations.

Not to be confused with asado, which is the word used for “barbecue” (as both the technique and the social event) in South America. But that will be the subject of another post!

Here’s what you’ll need to make this carne asada recipe:

STEAK – I use flank steak.

What kind of meat is carne asada?

Carne asada is traditionally made with skirt steak, flank steak or flap meat. These are all similar cuts, so feel free to choose your favorite one!

That being said, you can make carne asada with almost any type of steak. But I would leave the ribeyes and strip steaks – aka “the expensive stuff” – alone. After all, it’s almost an heresy to marinate these cuts!

How to make Carne Asada

While the marinade for carne asada varies greatly depending on region and preferences, almost all the recipes will ask you to cook the steak on the grill.

I am including instructions for both the grill AND the stovetop, using a cast iron skillet. After all, grilling season eventually ends and I want you to be able to cook this indoors when the cravings strike!

Here’s how I make this carne asada recipe. As always, you will find the printable (and more complete) version of the recipe at the end of this post.

How to cook Carne Asada

There are two ways to cook carne asada: in the grill or on the stove. If cooking on the stove, I highly recommend using a large cast iron as that will give you the best char!

The FDA recommends cooking beef to an internal temperature of 145 degrees F.

However, if you cook flank steak to that high of a temperature, it will be rubbery and unappetizing, so I recommend cooking it medium-rare (115-120 degrees F) for best results!

If you are a medium-well or well done steak kind of person, I would use skirt steak instead of flank. Since it is a fattier cut, it’s naturally more tender and can be cooked more without losing flavor and texture.

What to serve with Carne Asada

I like to serve my Carne Asada in a big platter, alongside a little bit of the marinade (that I reserve before marinading the steak), some kind of salsa (fresh tomato salsa is my favorite!), sliced avocados or guacamole, and corn tortillas.

Sometimes I serve a side of Mexican rice and beans for a heftier meal.

You can also use this carne asada recipe to make tacos, burritos or burrito bowls, and/or tostadas.

Can I make it ahead?

Any type of steak will never be as delicious as when it was right out of the grill or pan.

That being said, it is safe to cook it and reheat later. Just make sure you let the steak cool to room temperature before placing it in an airtight container in the fridge.

How long can I marinate steaks?

You can marinate steaks for up to 8 hours. I don’t recommend marinating longer than that, as the acidity of the marinade – which helps tenderize and flavor the steak – will continue to work and alter the texture of the meat, which can get mushy.

How long do leftovers last in the fridge?

Leftovers stored in the fridge are safe to eat for 3-4 days.

Can I freeze Carne Asada?

You can freeze the carne asada cooked or raw, as long it hasn’t been frozen previously.

If freezing raw, place the steak and the marinade in a large freezer bag and freeze up to 3 months. When ready to use, thaw overnight in the fridge and proceed with the recipe as written.

If freezing the cooked steak, let it cool to room temperature and then freeze in an airtight container or freezer bag. It will keep well for up to 3 months. When ready to use, thaw overnight in the fridge before reheating.

How to reheat Carne Asada

My favorite way to reheat leftover steak is on the stove.

Heat a tablespoon of oil in a cast iron skillet, over medium high heat. Once shimmering, add the steak and cook – flipping once – until hot.

Leftover carne asada can be stored in an airtight container, in the fridge, for up to 3-4 days.

To reheat leftovers, add a tablespoon of oil to a cast iron skillet and heat over medium-high heat. When shimmering, add the leftover steak and cook, flipping once, until hot.

If you love this recipe, you will also like: