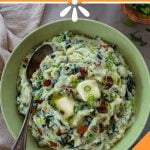 One of my St. Patrick’s Day’s favorites, Colcannon is Ireland’s best-known potato side dish. My version features creamy mashed potatoes, leeks, kale and bacon. Simple but so flavorful!

Complete your Paddy’s Day feast by cooking some of my other Irish recipes. I recommend the Dublin Coddle, the Cheddar Boxty and the Irish Soda Bread.

“Did you ever eat colcannon when ’twas made with yellow cream,
And the kale and praties blended like the picture in a dream?
Did you ever take a forkful, and dip it in the lake
Of the heather-flavoured butter that your mother used to make?”

The Irish love this dish so much, that – as you can see above – songs were written about it.

Can you blame them? Buttery potatoes, kale and bacon? Well, okay, the bacon is not often included, but I couldn’t resist it.

Few are the dishes that won’t benefit from a touch of salty, smoky bacon! Colcannon is not one of them. So do yourself a favor and add the bacon! You won’t be sorry.

And while this is the perfect side dish for a Paddy’s Day celebration, it is delicious year round. Whenever you need a side dish with character, remember of Colcannon! It is mashed potatoes on steroids.

If you’re going to shorten St Patrick’s Day, the right diminutive is Paddy and not Patty. Patty is short for Patricia, while Paddy is short for Pádraig (which is Patrick in Irish).

The word comes from the Gaelic term “cal ceannann“, which means “white-headed cabbage”.

Despite the name, the dish can be made with either cabbage or kale, and sometimes a mix of both! Other ingredients such as leeks, scallions, onions and/or chives can also be added.

And while here in the US we associate colcannon with St. Patrick’s Day, in Ireland it is a Halloween tradition to serve it, with charms (like rings, coins, buttons and thimbles) hidden inside the dish.

Some women would even go the extra mile and fill their socks with colcannon, hanging them from the handle of the front door. They believed that the first man through the door would become their future husband.

Despite all the fun and superstition, colcannon is not only reserved for Halloween, being a popular side dish year round in Ireland!

What is the difference between Colcannon and Champ?

While they are both Irish mashed potato dishes, Champ – popular in Northern Ireland – is slightly different, made of scallions mixed with mashed potatoes and no cabbage/kale.

WHAT YOU’LL NEED TO BUY:

Ingredients I’m assuming you already have in your pantry. But, if not, make sure to buy them as well!

What are the best kind of potatoes for Colcannon?

For the fluffiest and creamiest mashed potatoes, choose higher starch potatoes, like Russets.

Yukon Golds, considered all-purpose potatoes, are medium starch and will work as well, but won’t get as fluffy as Russets do.

How to make Colcannon Potatoes

This is a simple and straight-forward colcannon recipe.

Here’s how I make colcannon potatoes. As always, you will find the printable (and more complete) version of the recipe at the end of this post!

How to reheat leftovers

Colcannon potatoes will keep in the fridge for 3-4 days.

To reheat, place it in a saucepan and reheat on the stovetop, over medium-low heat. Stir often, adding a few splashes of heavy cream (or milk), to add back some moisture and restore its creamy and smooth texture.

If you followed my cooking journey long enough, you’ve probably seen me write “DO NOT FREEZE POTATOES” more than once.

While potatoes don’t freeze well, mashed potatoes do. As long as they are cooked with plenty of fat – and in this case we are using both cream and butter -, they will freeze without major alterations.

Just be prepared to add some extra dairy when reheating. You can reheat them straight from frozen, on the stove!

What to serve with Colcannon?

Colcannon is traditionally served with boiled ham or Irish bacon.

It also goes well with corned beef and cabbage, or a nice stew. It’d be the perfect side dish for my Stout Braised Short Ribs! 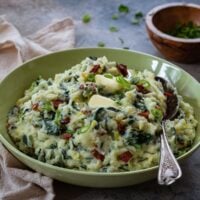